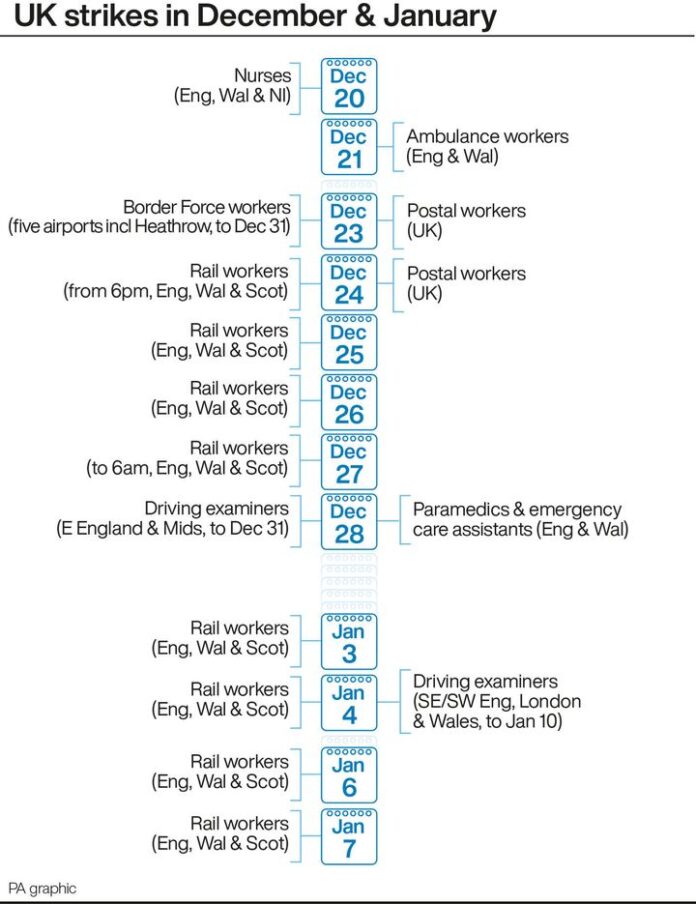 Ambulance workers including paramedics, control room workers and technicians will walk out in England and Wales on Wednesday in nationwide strike action.

The GMB, Unison and Unite unions are coordinating the industrial action, calling for a pay increase for workers. But they say this isn’t just about money – it’s also about making a stand to protect the crumbling NHS.

Anecdotally, people are already sharing stories of long waits for ambulances, with some forced to order taxis or use public transport to get themselves to hospital. Recently, a woman told of how she had to strap her 89-year-old grandfather to a plank to get him to hospital in the back of a van after he broke his hip and shoulder. A 999 call handler told her no ambulances were available.

So, what do these strikes mean for a system that’s already stretched beyond its limits? Here’s what you need to know.

When and where are the strikes happening?

The strikes on Wednesday December 21 will impact 10 of the 11 NHS trusts in England and Wales. Timings of the walk-outs will vary across the trusts, with some workers walking out for a full 24 hours.

A further strike by members of the GMB union at nine trusts will take place on December 28.

The ambulance strikes are in addition to the nurse strikes, which are happening for a second day up and down the country on Tuesday 20 December over pay, working conditions and concerns over patient safety longterm.

Will ambulances be available?

Some ambulances will be operating, but the strikes are expected to cause severe disruption.

It is expected that all category 1 calls – the most life-threatening, such as cardiac arrest – will be responded to. Some ambulance trusts have agreed exemptions with unions for specific incidents within so-called category 2, which covers serious conditions such as stroke or chest pain.

One hospital chief executive told the Guardian: “Most category one calls are supposed to be life-threatening so should be prioritised. But for category two and below it’s far less certain that people will get any kind of response, other than telephone advice.

“We are likely to see people with suspected strokes or heart attacks being asked to make their own way to hospital. A fit younger adult with a broken leg wouldn’t get an ambulance in these circumstances and it’s unlikely that an elderly person who has fallen at home would either.”

Health minister Will Quince urged people to stay safe on Wednesday and avoid “risky activities” that could pose a risk to health, which hasn’t sparked much faith in the system.

During the strike, the military will not drive ambulances on blue lights for the most serious calls, according to the Press Association, but they are expected to provide support on other calls.

Why are ambulance workers striking?

The unions are calling for the government to improve pay for paramedics and other ambulance staff amid soaring inflation. But they say this is also about working conditions and protecting the NHS longterm.

Kristin Houlgate, a paramedic based in South West England, posting a Twitter thread explaining how “the entire system has collapsed”.

“We’re no longer practicing emergency medicine. We’re just desperately trying to put out fires and triage the sickest patients, but it’s just not enough,” she said.

“There are literally hundreds and hundreds of emergency calls in the stack with no resources to send. This is true up and down the country. People are dying waiting for ambulances as we queue outside ED’s [emergency departments], themselves in crisis and experiencing critical incidents.”

She explained that she’ll sometimes spend entire shifts queuing outside the hospital, trying to care for patients as best she can while her radio constantly receives more calls from patients they simply do not have the capacity to help.

We watch these patients deteriorating, sometimes dying in front of us, desperately trying to help them but powerless as the system is so utterly broken that there is simply no space, no bed, no doctor that isn’t already treating someone equally as sick.

I cannot stress enough how morally injurious it is to crews, ED staff and control staff to hear broadcast after broadcast of patients in cardiac arrest, with their family members desperately resuscitating them, knowing there is no available resource to send.

As well as the impact on patients, Houlgate also shared the knock-on impacts on ambulance staff, who she says work long hours, often without a break and “no sustenance aside from a hastily snatched hospital biscuit and maybe a cup of water from the cooler”.

What does the government say?

Prime minister Rishi Sunak has refused to budge over pay for ambulance staff and other NHS workers.

“The government is acting fairly and reasonably and will always continue to do so. I’m going to do what I think is right for the long-term interests of the country: combating inflation,” he said on Monday.

“The government is doing everything it can to be responsible and put in place contingency measures to support people, but ultimately I will continue to urge the unions to call off the strike because that’s what is causing disruption to people’s lives, that is what is having an impact on their health.”

A government spokesperson added: “We regret the decision taken by unions to strike and we greatly value the work of all their members across the country. We will do all we can to mitigate the impact of this action, but the only way to stop the disruption completely is for union bosses to get back round the table and call off these damaging strikes.

“We want to ensure people are paid fairly, and we have been reasonable in our approach to agreeing to the independent pay review bodies’ recommendations for public sector pay rises.

“An inflation-matching pay increase of 11% for all public sector workers would cost £28bn, worsening debt and embedding inflation, which makes everyone poorer. That would be a cost to each household of just under £1,000.”

5 Things Not to Do Before Trying to Sleep