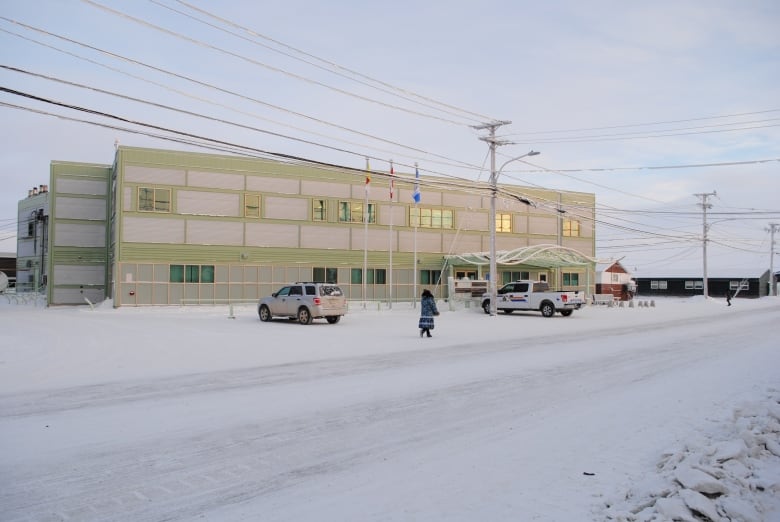 A mother from Cambridge Bay, Nunavut, says she was recently forced to choose between attending a medical appointment in Yellowknife and caring for her 23-month-old son because of misinformation about medical travel policies.

Demetra Panaktak has been struggling for months with throbbing pain and heavy bleeding from what she now knows is a benign, plum-size cyst that was growing on her left ovary.

“I just really, really needed to see the gynecologist,” she said.

The Nunavut government offers medical travel benefits to its residents to access medical services that are not available in their community. It spent roughly $90 million in 2018-19 for medical travel.

Panaktak says she delayed her trip twice over nearly two weeks because she didn’t know if or when her 23-month-old son and an escort could join her.

“Me thinking I had cancer and I would never get help … I felt like I had to choose between my son and my health for 11 days,” she said.

Panaktak says the confusion began after a nurse at Cambridge Bay’s health centre told the family they would travel to Yellowknife on Sept. 26 for her appointment. On the morning of the flight they were asked to bring their identification to the health centre to finalize the paperwork.

Panaktak was still breastfeeding her 23-month-old son and needed an escort to care for him during and after her procedure, she said.

But after lunch the nurse told Panaktak a medical travel manager said her son and escort were not approved to travel.

“He’s not a small baby and he can eat food” was the reason Panaktak says she was given. Panaktak didn’t know how long she would be in Yellowknife.

She didn’t get on the plane that day.

“There was no way I was going to leave my son,” said Panaktak.

The next day, Panaktak says medical travel “denied” saying her son couldn’t go, and clarified she could take her son but not an escort.

An escort can be provided in a number of scenarios if a practitioner recommends one. But the Nunavut Department of Health says its medical travel policy “does not provide escorts for the purpose of childcare services.”

I just didn’t understand for the life of me, why a system would work like this against us?– Dean Coles, father

“I’m going to split my son from his mom and he’s breastfed? Like, you can’t just do that,” said Dean Coles, Panaktak’s common-law partner.

The family maintains they didn’t have anyone to watch their son in Yellowknife.

“That puts a lot of stress on the child and his mother,” said Coles.

The family appealed the decision and lost.

A week later the family was set to travel again. But when they got to the airport, the flight was full. There was only room for Panaktak. Her son and escort had to travel another day, she said.

“I felt like I had to choose, again,” said Panaktak. Her common-law partner says the whole situation was frustrating.

“I just didn’t understand for the life of me, why a system would work like this against us?” Coles said. “Medical travel let us down.”

In an email response to CBC, Nunavut’s Health Department said it doesn’t comment on specific cases because of privacy.

Every medical travel file is evaluated on a case-by-case basis.– Government of Nunavut

“Every medical travel file is evaluated on a case-by-case basis,” wrote the spokesperson Alison Griffin. The Department of Health says it “aims to provide consistent communications” relating to medical travel.

Approved escorts have “the same access to prioritized scheduled airfares” as the clients, states the department’s email. Though, full-fare passengers are bumped “only in emergency situations.”

In an emailed response, Hickes said a review of Nunavut’s medical travel program, which began in 2016,  “is an ongoing process with no definitive end date.”

The department is making improvements and addressing concerns along the way, such as introducing a new medical travel policy last January, he said.

It includes allowing infants under two to travel with their parents or guardians to medical appointments if they meet certain criteria.

A laparoscopic procedure on Oct. 8 found Panaktak did not have cancer.

While the family is relieved, it’s still processing their medical travel experience. Panaktak wants her case investigated by the territorial government.

“I just felt like they neglected me and my family. They made me choose … They shouldn’t do that.”

Do you have a story about medical travel in the North? Contact kate.kyle@cbc.ca