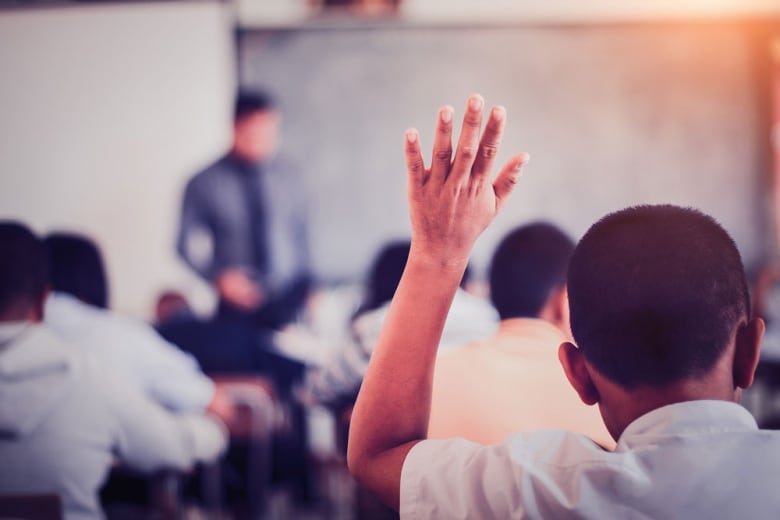 Students across Canada are back in class this month, but some say there’s a critical topic missing from their lesson plans: climate change.

Sophia Bi, a Grade 12 student at Lord Byng Secondary in Vancouver, and Aishwarya Puttur, a Grade 11 student at Bluevale Collegiate in Waterloo, Ont., are working to change that. Both are involved in campaigns to improve climate curriculum in Canadian public schools.

While the subject comes up in science classes, Bi said she can’t recall hearing about systemic issues such as climate policy or the need for an energy transition.

“All these really complex issues are never really discussed in any depth in schools,” Bi told Laura Lynch, host of What On Earth. “Mostly, it’s a one-time mention. Maybe it’s one unit, you learn it and then you move on.”

Ellen Field, an assistant professor in the faculty of education at Lakehead University in Orillia, Ont., said climate change education is uneven from province to province.

Her research, currently under review with the Journal of Curriculum Studies, shows that most climate change education is found in Grade 11 and 12 elective courses. Some provinces include climate change in mandatory science or social studies courses, but it’s not well integrated in various subjects or in the different grades.

“The overall focus is on understanding, mostly, the climate science, and less on climate solutions or on taking climate actions,” Field said.

She said Canada must improve climate change education in order to meet its obligations under the Paris Accord.

Field’s previous research reveals almost half of students from Grades 7 to 12 believe climate change is happening and think it’s caused by humans, but don’t believe that anything can be done to solve it. Field said this has an impact on young people’s mental health.

“Having this mindset may affect youth in terms of how they frame their future quality of life opportunities or possibilities,” she said.

Bi is active with a student-led group called Climate Education Reform B.C., which has developed a list of six actions to improve education about climate change, including consulting with students and developing resources for teachers.

Puttur, meanwhile, is part of a global campaign called Teach the Teacher, which empowers students to hold presentations with teachers at their school about ways to improve climate education.

“We need to make sure [climate change education] is no longer a privilege, but rather something that is available to all,” said Puttur. “And it needs to be one that includes the intersectionality of the climate crisis — so how climate change intersects with racial issues, with gender issues, with issues of the 2SLGBTQ+ community.”

Field said provinces should review curriculum and ensure that different aspects of climate change are taught in a variety of mandatory courses throughout the grades. Consulting with youth and Indigenous groups on curriculum, she said, is vital.

“Young people will be living with the decisions that adults make in the next five years for the rest of their lives,” Field said. “They should at least have a seat at the table where these decisions get made.”

Neither Bi nor Puttur is waiting to be invited to share their perspective with decision-makers. Bi’s group, Climate Education Reform B.C., is set to meet with B.C.’s minister of education in October, while Puttur is hoping the Teach the Teacher program can be delivered in her school district later this fall.

Both say a focus on solutions and the power of collective action is what’s needed.

“Climate education really needs to be one that not just explains the issue thoroughly, but also inspires hope within young generations,” said Puttur. “This is my future, this is my Earth, and now I know the severity of [climate change]. But I also know that there are beautiful solutions.”

What on Earth? reader Norm Petersen wrote in with this:

“Hi, just read your article on going green. I love it. We are totally off grid in rural Ontario. Our system gives us enough power to live a normal, everyday life but not with all the conveniences that city folk take for granted. Things that require immediate heat, like dishwashers, curling irons and hair dryers, we avoid, as they are too hard on the system. All that to say the reason why I’m writing is to express a concern we have had since going off grid. That concern is insurance. It’s great to see this huge push to go green, but the government has not (from what we have experienced) addressed the insurance issue, or should I say the lack of available insurance. Even dealing with insurance companies that provide rural properties and farmers with policies, when solar is mentioned the conversation ends with ‘sorry, we don’t insure solar.’

“Let’s continue to promote green but let’s ensure that the infrastructure is built to provide affordable insurance to those that choose to help save the planet.”

Thanks, Norm. This is an issue that we’re looking into.

There’s also a radio show and podcast! Canadians voted in another Liberal minority government. So what action can it take on climate change? What On Earth host Laura Lynch speaks with voters and policy experts about the path forward for the Trudeau government. What On Earth airs Sunday at 12:30 p.m., 1 p.m. in Newfoundland. Subscribe on your favourite podcast app or hear it on demand at CBC Listen.

The Big Picture: The green response to Canada’s election

The results of the 2021 Canadian election look startlingly similar to the same democratic exercise in 2019. The Liberals won another minority government, shading the Conservatives by about 40 seats. There was loud criticism from all sides about Justin Trudeau’s decision to trigger an election during a pandemic, but environmental groups managed to put a salutary spin on the outcome. “While no party won a majority mandate yesterday, the environment did, thanks to the millions of Canadians who cast ballots for parties that put forward strong policies to confront the climate emergency and advance environmental protection,” said Environmental Defence. Meanwhile, Clean Energy Canada said, “While the political scorecard may look familiar following last night’s election, voters sent leaders a clear message on climate change: there’s only one acceptable path forward, and it’s the faster one.” The NDP and the Green Party promised more ambitious emissions targets and an aggressive transition away from oil and gas production, but several high-profile experts said the Liberals had the most effective climate platform. The general feeling among green advocates is that returning to a minority government is likely to force the Liberals to raise their environmental ambition.

Birds took advantage of lockdowns by hanging out in the city, study finds

Warblers, hummingbirds, hawks and other migratory birds across Canada and the U.S. hung out in cities during the pandemic lockdowns in the spring of 2020, treating urban-dwelling humans to far more visits than usual, a new study finds.

Birding is a hobby that surged in popularity during the COVID-19 pandemic. Many birders logged the species they sighted and their locations through citizen science apps such as eBird that allow data gathered by volunteers to be used by scientists for conservation research.

The new study by Canadian and U.S. researchers compared birders’ observations on eBird between March and May in the three years before the pandemic to those same months during the 2020 lockdowns, which coincided with birds’ spring migration. (It was funded by a grant from the Natural Sciences and Engineering Research Council of Canada targeted at pandemic-related research.)

The researchers found big changes in which bird species in the study were spotted where. Of the 82 species tallied in the study, 66 of them changed abundance in counties where the level of traffic or human activity was altered.

Most species increased in urban habitats, near major roads and airports and where there were stronger lockdowns, the study found.

“We also see with many species within cities themselves, that they moved from areas far from roads into areas closer to roads, for example,” said Nicola Koper, a professor of conservation biology at the Natural Resources Institute at the University of Manitoba in Winnipeg and the senior author of the study.

“That suggests that before the pandemic, a lot of birds were really being pushed out of the habitats that otherwise could have been suitable for them,” she said.

Bald eagles were one species that made very noticeable moves to counties with the biggest drops in traffic, Koper said. “They migrated … using a different pattern in order to take advantage of the strongest lockdowns.”

Sightings of ruby-throated hummingbirds greatly increased near airports during the spring of 2020. Other birds that seemed to flock to urban areas during the lockdowns were warblers (see photo above), which have seen very steep population declines since 1970.

To Koper’s surprise, even common species such as American robins spread into areas where they didn’t previously live.

While the study showed that there were more birds in urban areas as a result of the pandemic, it didn’t measure changes in their actual populations. But Koper said having access to more habitat and resources during migration, which is a dangerous time for birds, likely had a positive impact.

Wesley Hochachka, a senior research associate at the Cornell Lab of Ornithology in Ithaca, N.Y., who wasn’t involved in the new study, said in many cases he agrees that it looks like some species increased in urban areas.

But he thinks with other species, it’s possible they simply changed their behaviour, such as by singing more or hiding less, “so that they become more visible or more audible by human observers.”

While scientists had already documented the way the pandemic affected individual species in certain areas, such as white-crowned sparrows and northern cardinals, Hochachka said the new study, by including 86 species across North America, shows how widespread human impacts are.

Koper suggested maintaining some lockdown habits — such as working from home more and driving and flying less — could reduce vehicle and air traffic and benefit both birds and humans.

“I think during the pandemic, we realized how much we depend … in terms of our mental health, on nature and green spaces and birds and wildlife around us.”