These customers were promised shipping containers. Now they’re out thousands of dollars 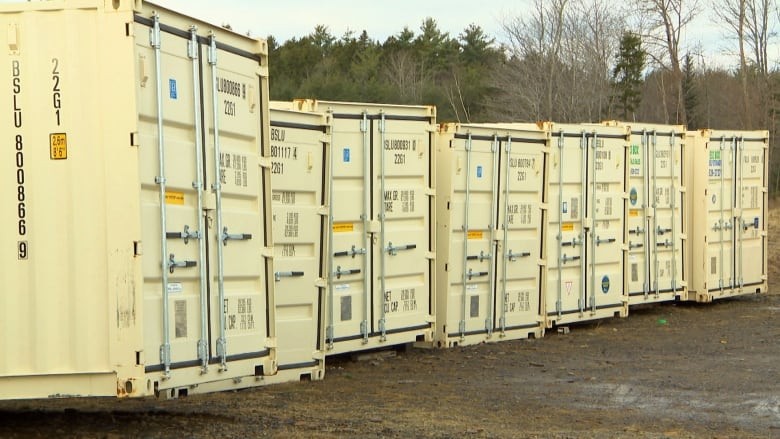 Pattianne Hatfield, a businesswoman in Bridgewater, N.S., has been hearing a lot of expletives when she answers her phone these days.

That’s because she’s the owner of Eco Box Containers and Storage Ltd., a company that sells shipping containers and whose name is being used by scammers to make their ripoffs seem legitimate.

“My reputation has gone from amazing to right down the toilet,” Hatfield said.

Hatfield said what bothers her most is that her company name is being used to take advantage of people.

One of those people is Canning, N.S., resident Spencer Osmond.

Osmond, who runs a small business, checked out online classified ad service Kijiji for a shipping container — called sea cans — to store items. He looked at a number of ads and selected one that had what he wanted at a comparable price.

He called the seller, who identified himself as Evan and the company as Box Containers LLC.

Osmond had several conversations discussing stock, pricing, shipping times and where the containers were located.

“I got legitimate answers back,” he said. “They said they had a big place in Brampton, Ont., and they also had another lot in Bridgewater.”

Using emails and texts, Osmond agreed to a price of $4,020 for a 40-foot container that was nine feet high and eight feet wide, as well as a delivery to his Canning location.

He said he received an invoice for the full amount with an email address for an e-transfer. The money was required before the container could be shipped, so he paid it.

“We’re a small business here and we’re fairly new, so I buy and send e-transfers pretty much on a daily basis. It wasn’t a big deal at the time” Osmond said.

But when the delivery date came and went with no delivery, Osmond called the company.

“They stopped answering my emails and text messages, so then I started getting suspicious,” he said.

His wife contacted the company using a different email address and phone number and got an immediate response, but when the couple identified themselves, the company stopped responding to her, as well.

‘Listen bud, your money is gone’

Osmond drove the roughly 112 kilometres to the Bridgewater business that Box Shipping Containers LLC said it operated. Once there, he discovered Hatfield’s shipping container business and learned it was not connected to the company he’d paid for the container.

“The last time I talked to him, he laughed at me and said, ‘Listen bud, your money is gone,'” Osmond said. At that point, he said he knew the chances of seeing his money again were “zero.”

Osmond is one of dozens of people who have contacted Hatfield, who said she gets a couple of calls every day. She has even had people come to her company’s site with a truck, planning to tow away their newly purchased container.

Hatfield has been contacted by the Cape Breton Regional Police. She said the officer told her he was investigating a complaint about a shipping container that had been paid for but never received.

In New Brunswick, Codiac RCMP confirm they are investigating a complaint from someone who paid $10,000 for two shipping containers advertised on Kijiji that were never delivered.

In Nova Scotia, the RCMP have received six complaints about the sea can scam between Oct. 13 and early December, according to spokesperson Sgt. Andrew Joyce.

While Joyce was unable to provide the names of the companies currently under investigation by the police force, he said the total dollar loss is $17,420.

“Using the addresses of legitimate businesses in other provinces is simply a layering technique used by a fraudster in an attempt to add legitimacy and concealment to their scam,” he said.

Joyce said the scam is not uncommon and has been around for quite some time — and while this one involves storage containers, the same scam occurs with pets, rental properties and other items people want to buy.

Kijiji displayed a number of other shipping container ads from the same person in Prince Edward Island, New Brunswick, Ontario and Manitoba.

Ron Atsinger of Lacombe, Alta., was in the market for a shipping container when he responded to a Kijiji ad in early December. He asked for the company name and was directed to BigMax Containers.

Atsinger said he was told the company required the full cost of the container before it could be shipped. But he became suspicious and refused to send the funds, telling the company in a text he wouldn’t do that because “there are too many scams out there.”

Instead, he asked to see the container first. When he was told that wasn’t possible, his suspicions were confirmed and he stopped communicating with the person who posted the ad.

Who are these scammers?

The two companies identified by Atsinger and Osmond are Box Containers LLC and BigMax Containers.

Both have professional-looking websites, but upon taking a closer look, details about the businesses are lacking.

BigMax Containers has a phone number and email address and shows it has offices in Bridgewater, Toronto, Vancouver and at 2982 Fulton Rd. in New York.

The Canadian locations don’t have civic addresses, but a search of the Fulton Road address shows a number of them in the state, none with a business called BigMax Containers.

It’s unclear whether the two companies are operated by the same people, but both tell customers in text and phone conversations that they have offices at Hatfield’s business in Bridgewater and Seaport Intermodal in Brampton, Ont.

Seaport Intermodal’s main business is storing and transporting shipping containers, although it does sell a few.

Vice-president Alex Cardin said his company received three or four inquiries from people in October who saw his company’s address on the Box Containers LLC website and called to inquire about purchasing a container.

He hasn’t heard from anyone who paid the scammers for a container but didn’t receive it.

CBC did reach “Andrew” at BigMax, but once it was explained to him that a reporter was investigating complaints about the company, there was no response and “Andrew” no longer answered questions or spoke, although he remained on the line. He did not answer subsequent calls or respond to voicemails or emails.

Box Containers LLC did not respond to our inquiries, either.

Joyce, the spokesperson for the Nova Scotia RCMP, said investigations into these scams can be long and involved — and while the police have had “some success with these frauds,” the scammers could be anywhere in the world.

He said it can take months to get approval to access emails, phone and bank records. The scammers may also involve others in the payment process, which further complicates the investigation, Joyce said.

“Sadly, the investigation leads to a fraudulent setup of a bank account that then often leads to outside the country, to a country that Canada may have limited relations with,” he said, adding the investigation gets cold after a lot of effort and resources were put into it.

Joyce said he doesn’t want to blame victims of these scams because “these fraudsters can be very convincing and deceptive.” The best way not to become a victim, he said, is to physically verify in person that the item exists and the seller is legitimate.

He said relying on photos alone is risky because the buyer has no way to confirm that the item in the photo is the actual item they’re paying for.

As for Spencer Osmond, he’s come to terms with the fact that his $4,020 is long gone.

At the time, he thought he had done his due diligence, but now in hindsight, he said he didn’t pick up on certain red flags.

“I got complacent about buying things online due to COVID and things not being open,” Osmond said.