The Road to Supremacy

Sweat was still dripping from Canelo Alvarez’s forehead after his unanimous, but less than thrilling, decision win over Julio Cesar Chavez in May. During a postfight interview at center ring, the barely-panting former champion threw down his next challenge: “Golovkin, you are next, my friend!” On cue, the current champion, Gennady Golovkin, entered the ring as his highlight real played above. The promotional tour for the Canelo vs. Golovkin “Supremacy” battle had begun.

Golovkin is from Kazakhstan but promises a true Mexican-style fight and a “big drama show” against Canelo, the Mexican native in a fight Oscar De La Hoya has had in the works for a long time. Canelo Alvarez vs. Gennady “GGG” Golovkin will take place on Sept. 16 for the unified middleweight title in Las Vegas.

The promotional tour, filled with glamour and the mundane, happened in late June, with De La Hoya, Canelo and Golovkin embarking on an international trip with stops in London, New York, Los Angeles and ESPN in Bristol, Connecticut. Each team flew in its own private jets and had its own caravan of luxury, black SUVs. But even in this line of work, there is much tedium on the road to Supremacy. 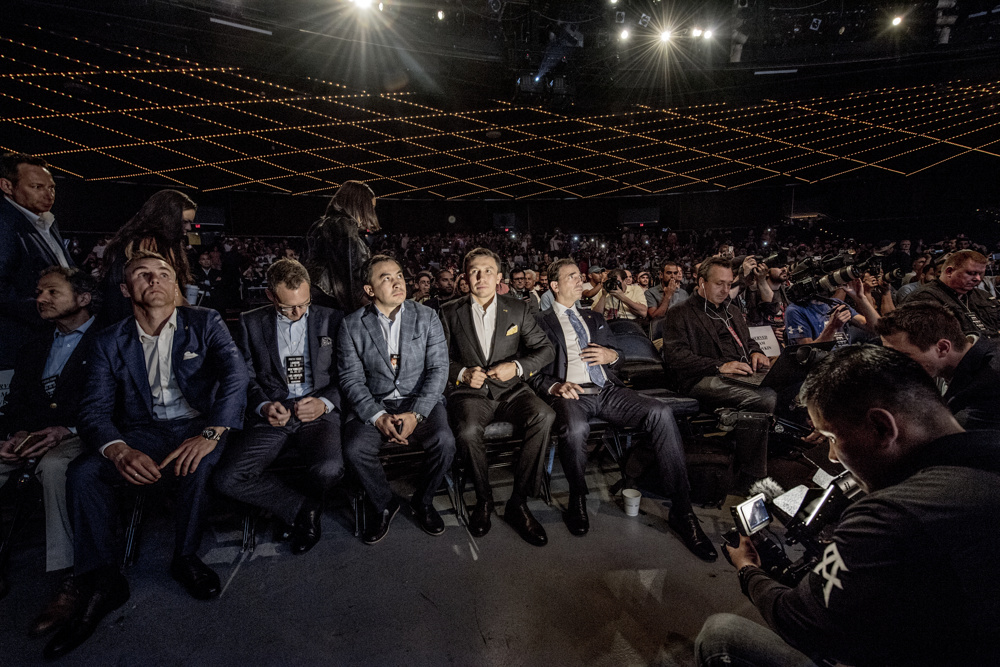 A cameraman focuses on current unified middleweight world champion Golovkin, who buttons his coat alongside his team in an auditorium at Madison Square Garden. Both boxers, their teams and their promoters gathered with a crowd of fans to watch “I am Boxing,” a Golden Boy Promotions film highlighting GGG and Alvarez. The film was played to excite the crowd before both boxers appeared on stage together to answer questions and pose for a faceoff. 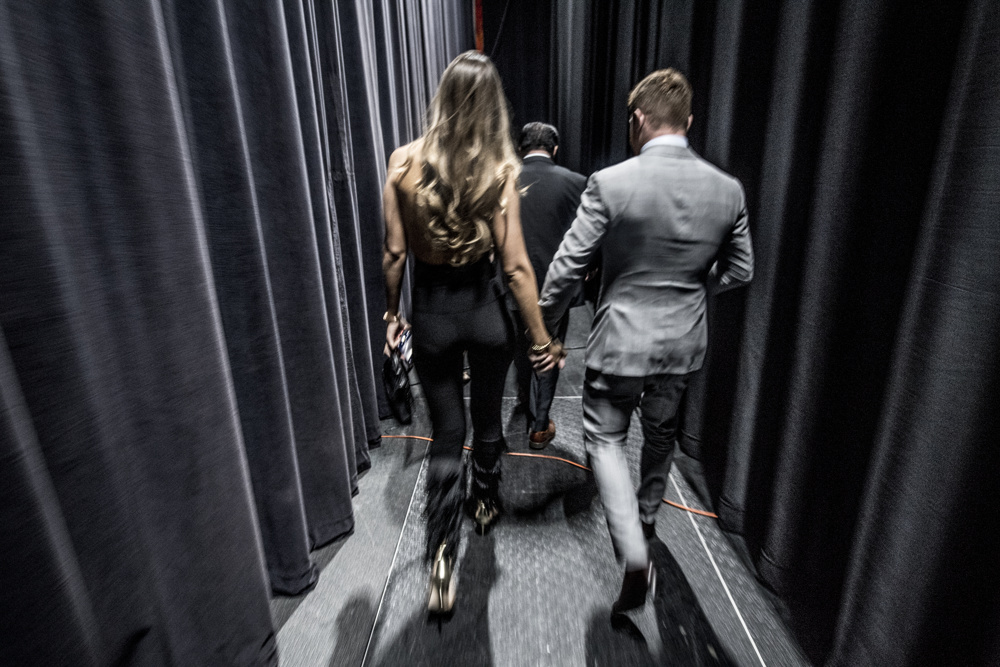 Former middleweight champion Alvarez, right, and his girlfriend, Shannon De Lima, left, leave Madison Square Garden after Canelo appeared with impending opponent Golovkin. They began a whirlwind second day of their four-day promotional tour in London before flying to New York, where they did radio and television interviews and ended the day with a large-scale promotion at Madison Square Garden. 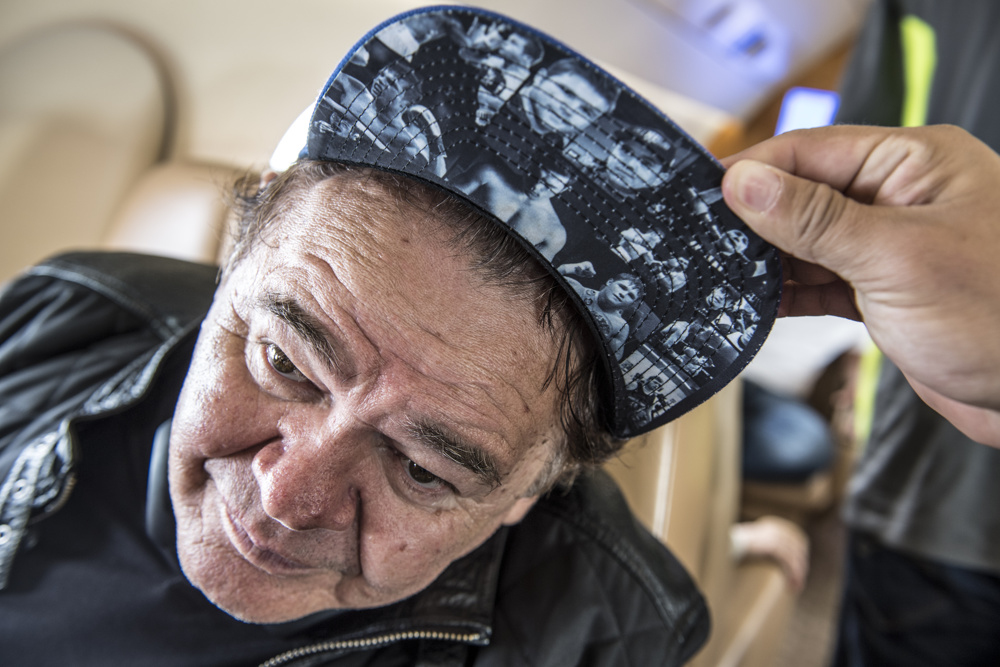 Eddy Reynoso, Alvarez’s trainer, wears a hat declaring “No Boxing – No Life.” Reynoso’s son and Canelo’s manager, Jose “Chepo” Reynoso, came up with the phrase, which they say is a way of life for the entire team. Under the brim and out of sight to most, is a photo collage of Canelo. 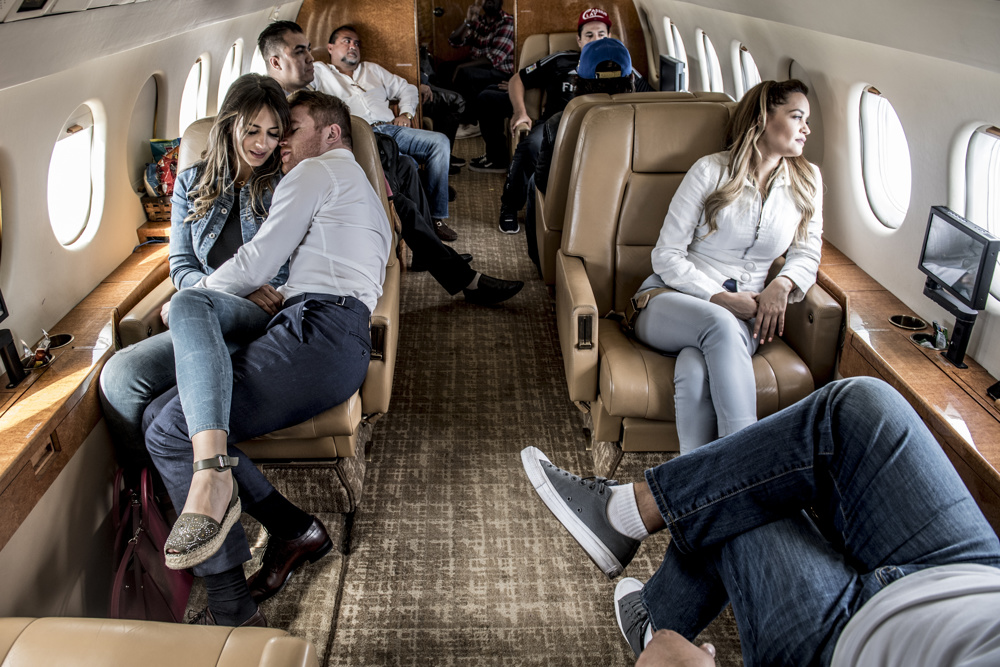 De Lima and the former two-division world titleholder Alvarez share a seat onboard their charter jet from New York to Windsor Locks, Connecticut. The small jet became home base on the four-city tour. Canelo’s marketing manager, Nadia Sepulveda, right, and his trainer, manager, promoter and friends round out the group in the main cabin. 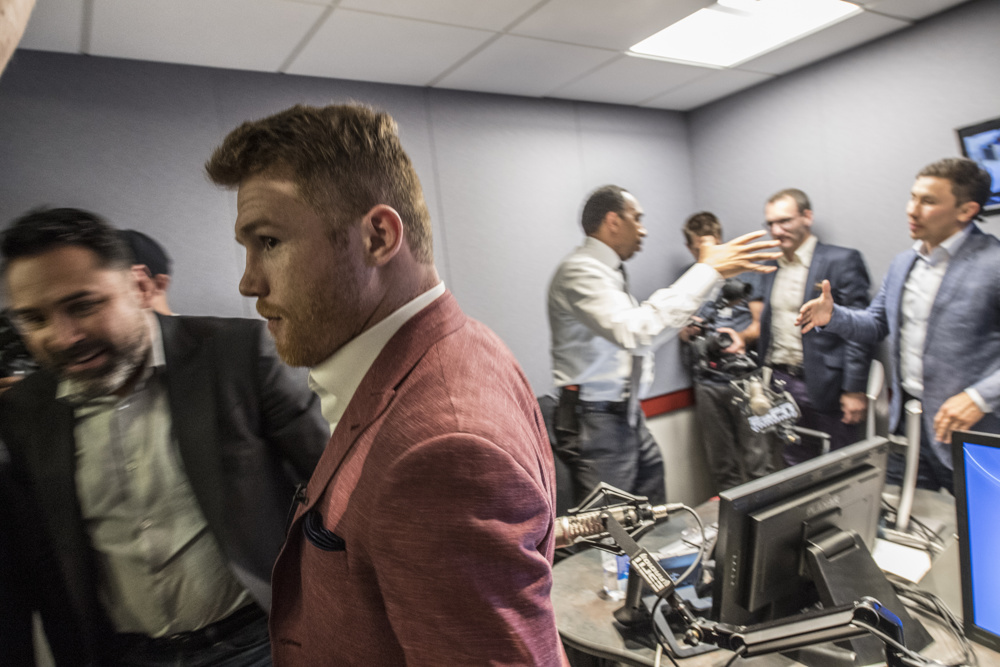 The boxers and their promoters and teams spent most of the day at ESPN in Bristol, Connecticut, running between studios to participate in live and recorded radio and television programs, including a segment for The Stephen A. Smith Show. Alvarez, center, heads out the door with Golden Boy Promotions founder Oscar De La Hoya, left, as Stephen A. Smith thanks Golovkin, background. 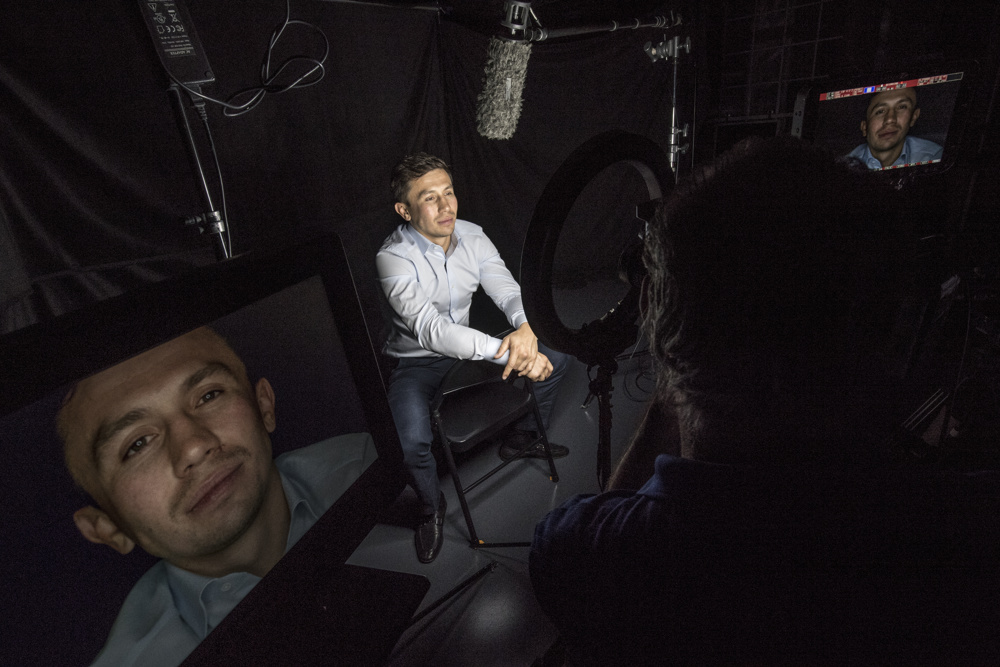 Lit by soft ring lighting during a recording at ESPN, Golovkin’s image is displayed on monitors in the small, darkened studio for the cameraman, producers and interviewers. GGG answered questions before recording some extra segments in which he shadowboxed the camera. 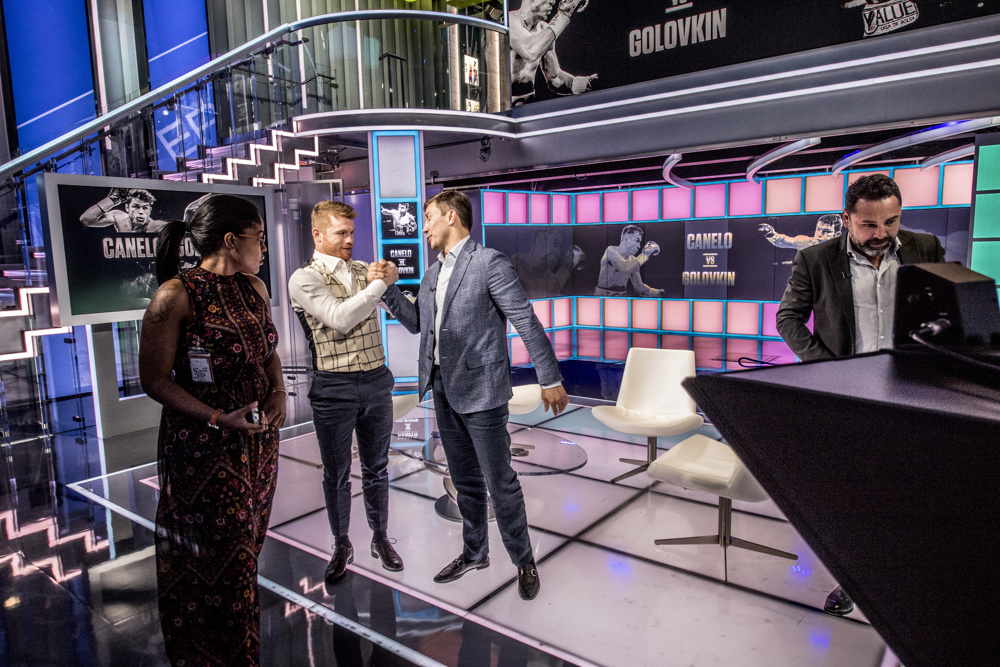 After a grueling day of being shuttled around New York and Bristol, taping interviews for radio and television, Alvarez, left-center, and Golovkin, right-center, shook hands off camera after their last interview. They and De La Hoya, right, would soon head to the airport to fly to Los Angeles for the final day of their tour. 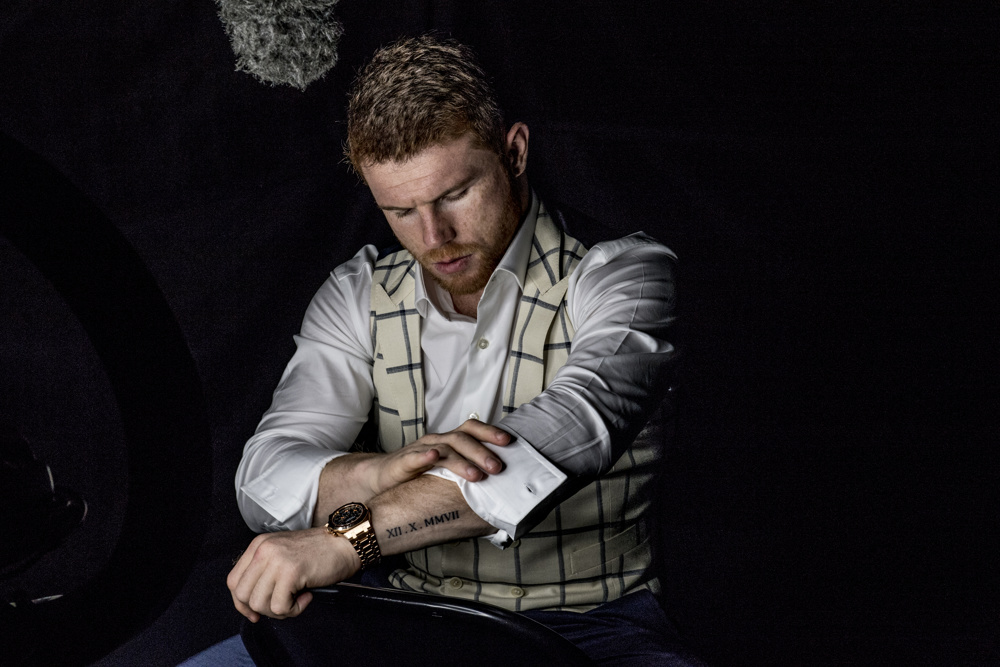 Alvarez, rolls up his sleeves following an interview in a recording studio at ESPN. 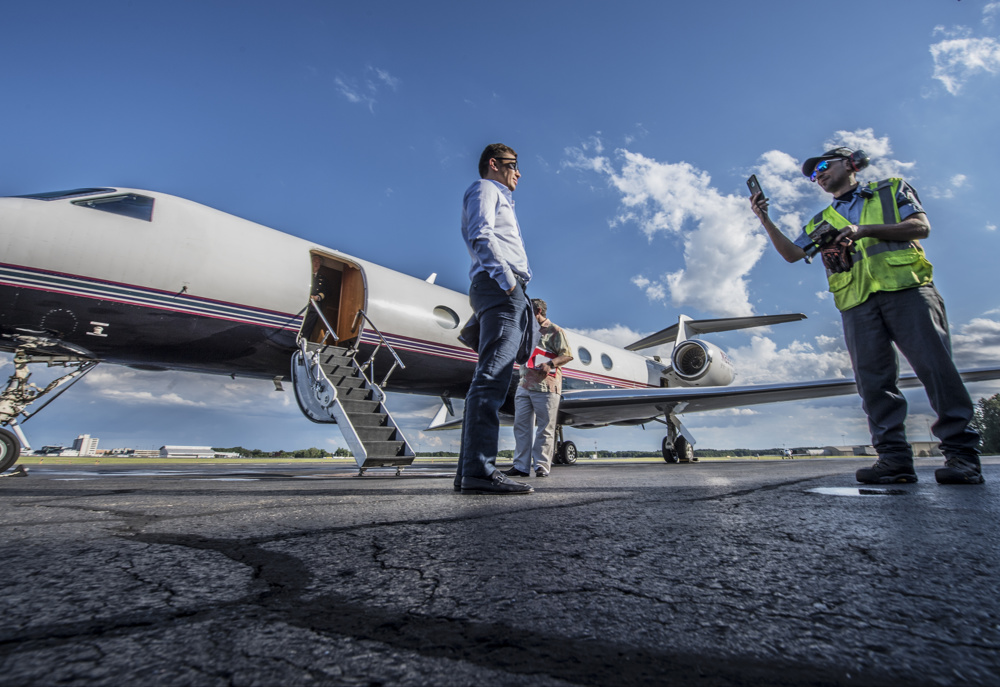 Moments before departing Connecticut’s Bradley International Airport, Golovkin poses for a photo for a worker at the airport. The oft-smiling Golovkin rarely disappointed a fan seeking an autograph or photo during the tour. 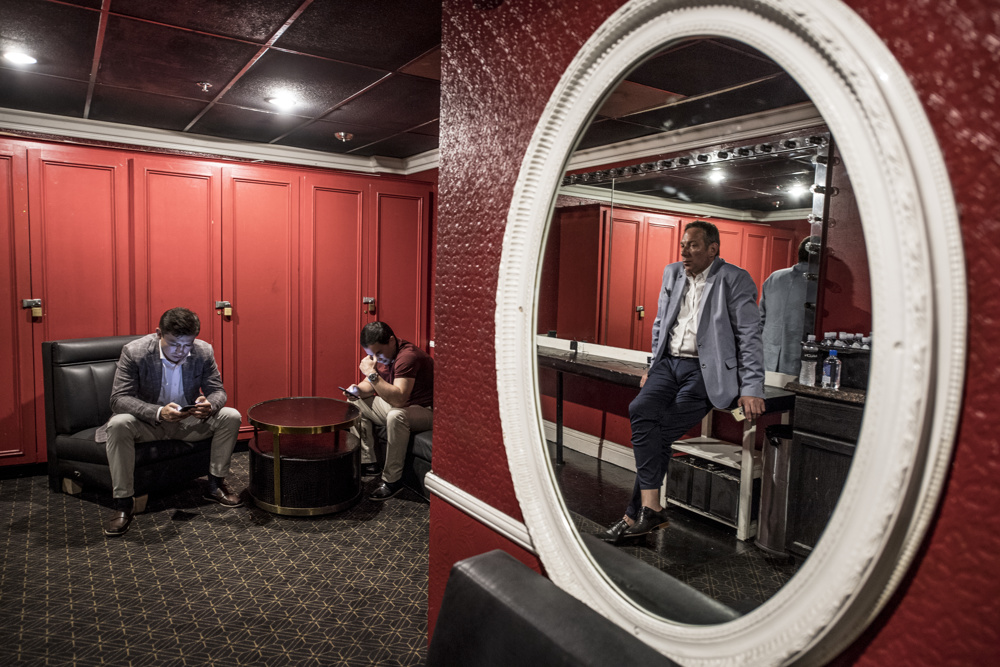 Golovkin, left, and his twin brother, Max, center, check their phones at the world-famous and historic Avalon Hollywood in Los Angeles while waiting to go on air for television interviews. Security detail Rolando Simoneschi, right, looks on. Quiet was necessary to keep noise from traveling through poorly insulated walls into the taping that was going on in an adjacent room. 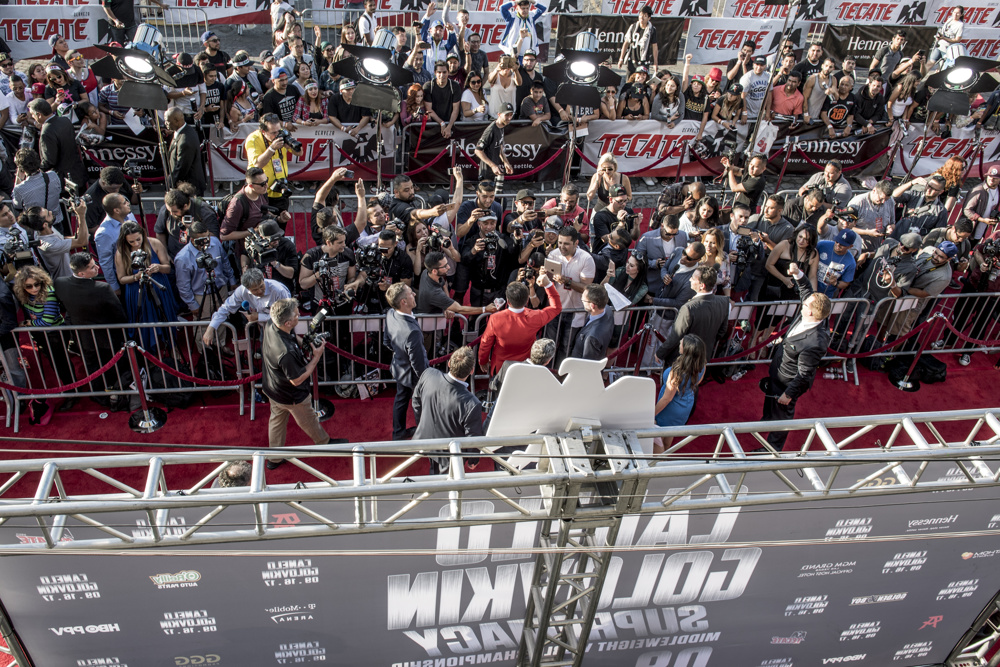 Golovkin, plays to the home crowd while wearing his red jacket for a walk down the red carpet event at the Avalon Hollywood. Originally from Kazakhstan, Golovkin now resides in Los Angeles with his wife and son. 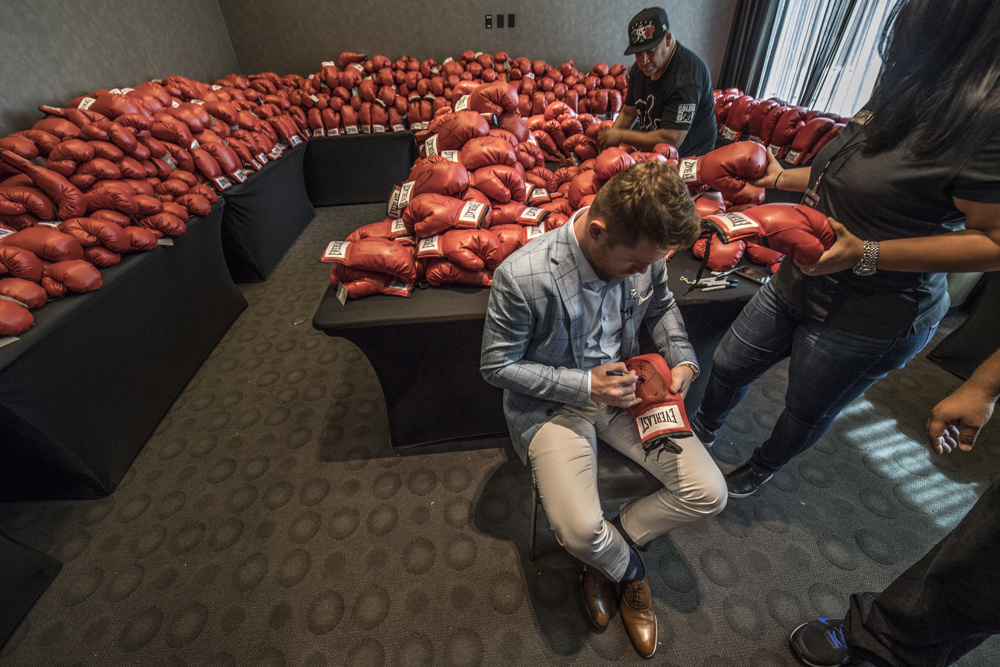 Tucked away in a conference room at the W Hollywood hotel in Los Angeles, Alvarez plods along autographing boxing gloves. There were 1,200 gloves to be signed by both boxers, and while they might not have signed them all, they each approached the task in a disciplined, business-like fashion. 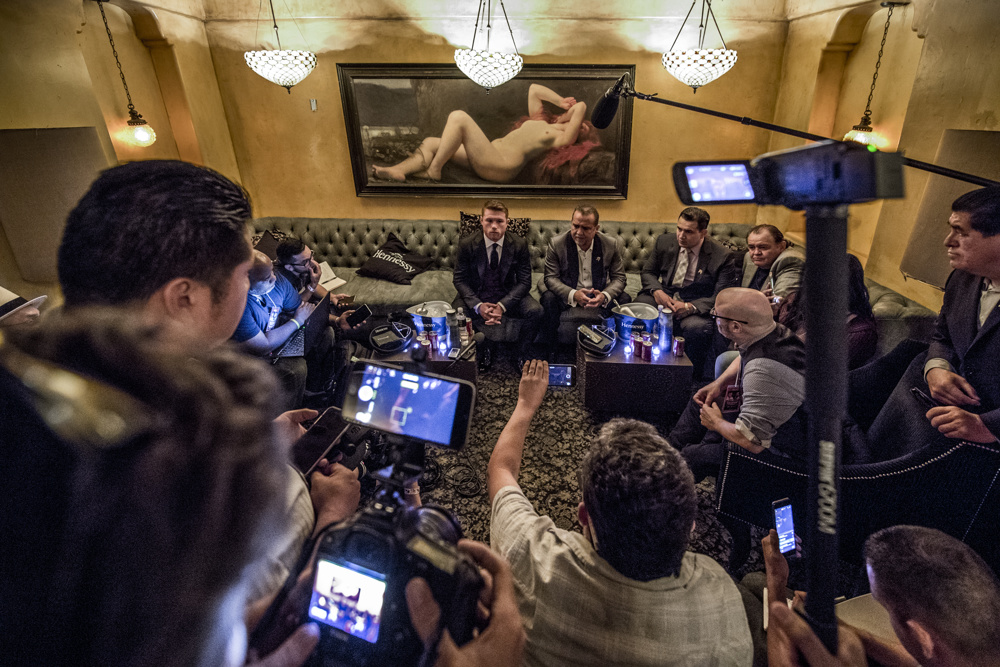 Alvarez, center, holds a news conference inside of the Avalon Hollywood before appearing in the night’s final promotion in the main theater. 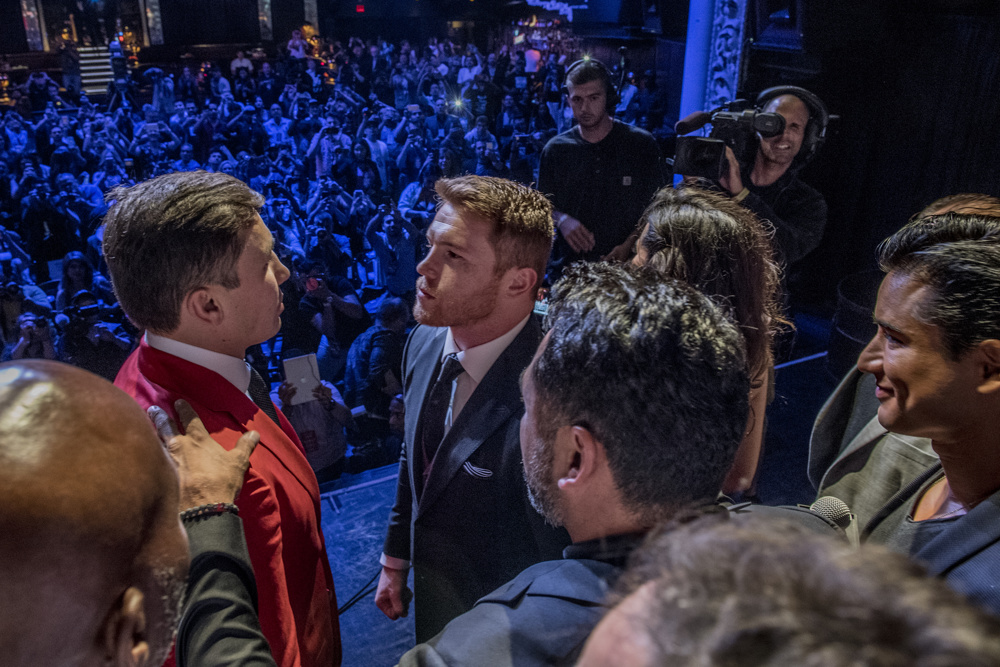 Golovkin, left, and Alvarez, center, face off for the final time of their promotional tour as De La Hoya holds them by their shoulders to the crowd’s delight. Host Mario Lopez, far right, looks just as delighted. 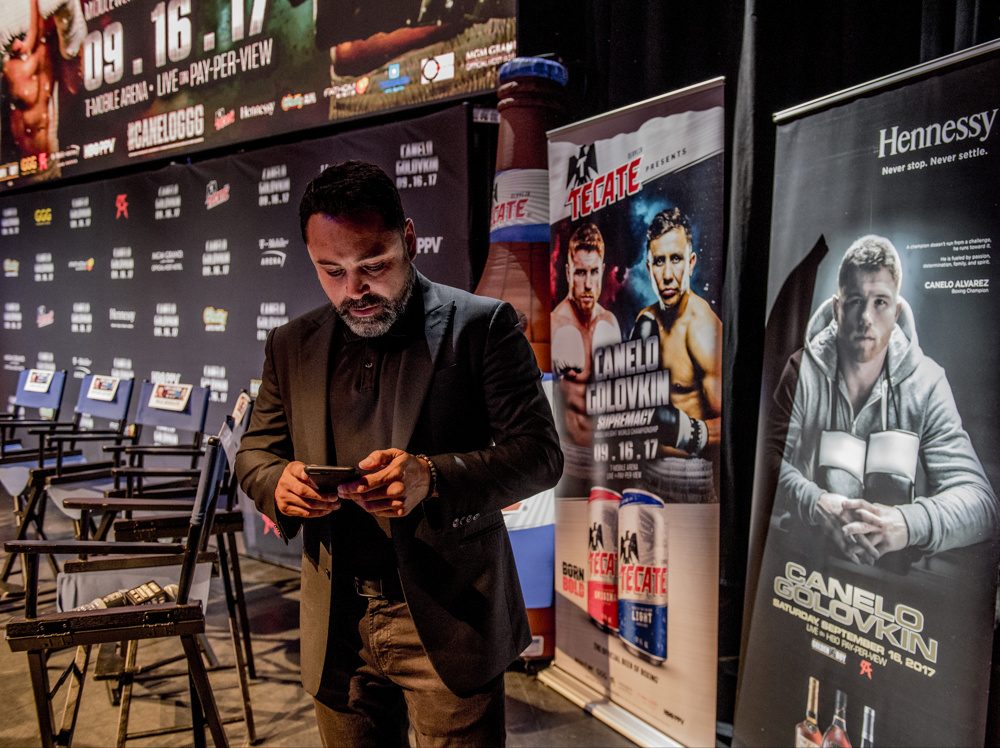