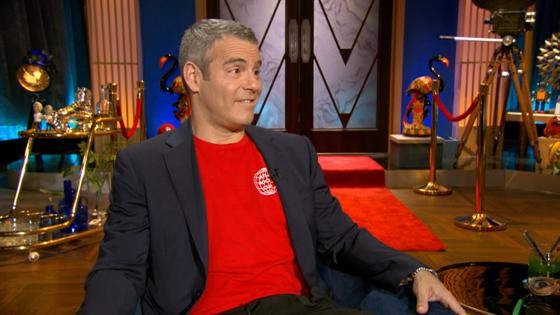 The Real Housewives of New York City can accomplish so much in 44 minutes of television, it’s truly awe-inspiring. “It’s a circus of emotions,” Bethenny Frankel said about the ladies’ most recent night at Dorinda Medley‘s Berkshires house—and she was not exaggerating in the slightest. Where to even begin?

Let’s start with Bethenny. Your favorite B started off by apologizing to Luann D’Agostino for their last Berkshires blowout.

“To you having the thickest skin of anyone I know. I apologize for last year here, which we don’t need to revisit. I genuinely do. I think about that night, I really don’t like myself like that,” she said.

“Thank you, I appreciate that…It was ugly, I want this to be a fun night,” Luann replied. But it wasn’t a fun night.

Carole Radziwill started a fire in a broken fireplace. Ramona Singer spilled chicken broth or whatever was on her plate all over Dorinda’s chair and gleefully celebrated winning a chocolate Santa. And then Bethenny had an emotional breakdown over her divorce from Jason Hoppy while Luann went on and on about marrying Tom D’Agostino and how she’s following her gut, like she advised Tinsley Mortimer to do.

“Luann, my heart and gut and instinct got me in the f–king toilet bowl. The worst situation of my entire life…I’m literally in a dungeon torture chamber and that is because I just went with my heart and my gut,” she said about her marriage.

“My life is blessed and good. I have a wonderful daughter, but I’m in a very, very negative, torturous situation as a result of my divorce and I’m holding on by a thread,” Bethenny said in a confessional.

Luann thought that now Bethenny’s divorce was done, Bethenny was free of her past. “I didn’t go through s–t, I’m in s–t. I’m not done, I’ll never be done…You have to be f–king smart because I’m on goddamn hell. OK. Hell. And it will not end, it will never end,” Bethenny said.

Carole shed some light on what’s been going on in Bethenny’s life after she left the room.

“Her ex-husband, he harasses her. He’s harassed Dennis. He sends these emails that are so nasty. She thought it would get better, but it ‘s just gotten worse,” Carole explained to the ladies.

Luann went to talk to the clearly upset Bethenny, when through tears, Bethenny told her she thinks marrying Tom is a big mistake.

But while Luann admitted she was nervous to tie the knot, she and Tom are “happy.”

“We’re doing our own thing,” she said.

What if photos, like the ones Bethenny received, of Tom with another woman, came out again?

“That would never happen again,” Luann said about she forgave him and moved on.

The drama didn’t stop there. During dinner, everybody seemed to notice Ramona was acting a little bizarre.

“There’s something strange going on with Ramona and I can’t put my finger on it. She’s jittery and all over the place and intensify everything,” Dorinda said.

“I don’t know what’s going on with Ramona,” Carole said. “She’s acting crazier than normal and her normal is pretty crazy. It might have something to do with booze?”

“This is Ramona off the richter scale crazy. That is not something Bethenny reacts well to. Don’t show your crazy side. Calm down, Ramona,” Sonja Morgan said.

After winning her chocolate Santa and staining Dorinda’s chair, Ramona tried to apologize to Bethenny over their Hamptons blowout when Ramona asked if she told Bryn about her “acting” past in some questionable movies. “Creepiest apology of the year award. It was this creepy, over the shoulder wine breath apology. And it came out of nowhere that apology,” Bethenny said.

Things didn’t stay settled for long when the two went off on their own and started to rehash the drama at hand and everything exploded when Bethenny said she didn’t think Ramona was a good friend. To be continued…

But first, rejoice in how Bethenny described everybody’s past with Luann and why they weren’t invited to her wedding: “Let me summarize it: Carole’s boyfriend happens to have been Luann’s former chef and happened to date Luann’s niece…Ramona dated Tom and is on a full-on campaign knowing every single thing about Tom’s perceived in discretions and his dick and everywhere it’s been…This is some place Tom’s dick has actually been…I called Luann a whore in this very room last year. When you’re going to f—king shake it down, we all really don’t deserve to be invited to the wedding.”