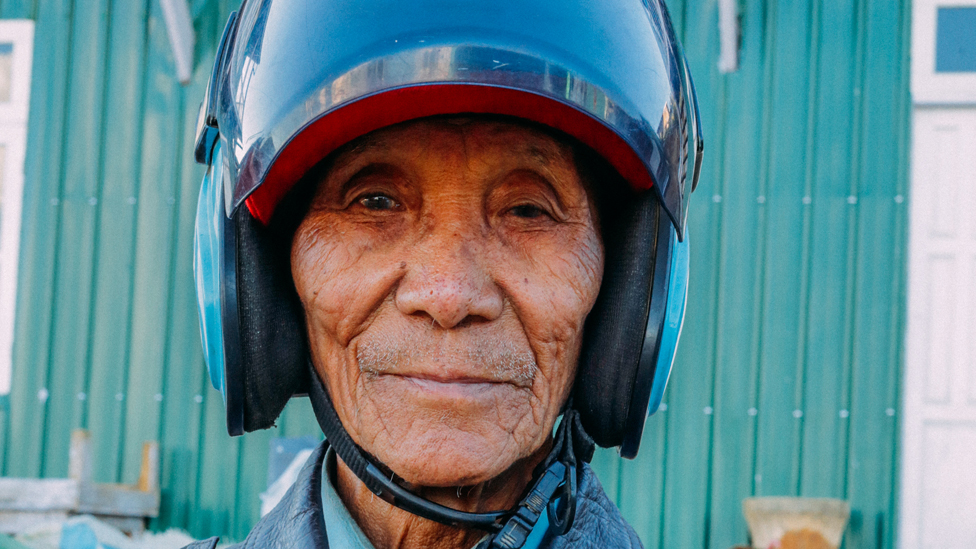 The soldiers who fought for Britain in Burma (now Myanmar) in World War Two have often been called the Forgotten Army, but the Burmese who formed part of this army were truly forgotten by the UK in the decades after the war. For the last 11 years, reports film-maker Alex Bescoby, a group of British volunteers has been struggling to find survivors and to help them in the final years of their lives.

The year is 1944, and darkness is falling over the thick jungle of Burma’s eastern hills. Under the dripping canopy, a young Karen man holds his breath as he carefully conceals a landmine in the undergrowth beside a jungle track.

He scrambles up the steep hillside, uncoiling wire as he goes. At the top of the hill, he removes the fuse from a hand-grenade and connects it to the wire. He settles into position and waits.

It doesn’t take long. A cohort of Japanese soldiers – who have been occupying Burma since 1942 – approaches the young man’s position. With the enemy just yards away, he closes his eyes and activates the fuse.

“Oh it was horrible,” he gasps. “So many died. The stones flew up high into the sky and then fell back down.”

Saw Berny, now 94, recounts the story sitting in a wheelchair in his tumbledown little home in Yangon, Myanmar’s largest city, but he has me hanging on his every word, and feeling as though I’m by his side in the jungle.

Born in the Karen hills, near the Thai border, the young man’s knowledge of the terrain now became vital.

“I knew the way so I had to lead 50 people. I showed them how to withdraw through the thick jungle,” he remembers. In doing so he probably saved their lives.

That same evening, a Japanese Army battalion launched a massive counterattack, killing many combatants and civilians alike. This was the terrible price of resistance.

Saw Berny was just one of tens of thousands from all over Burma who volunteered to fight for Britain against the Japanese, in what historian Philip Davies calls “the most successful guerrilla campaign of the Second World War, the greatest defeat the Japanese army had ever suffered in its entire history.”

Now, more than 70 years on, most of these volunteers have died. Saw Berny himself is almost deaf and largely bed-bound – even though mentally he is razor sharp.

He fondly remembers the names of his British commanders.

“We kept our loyalty,” he says.

But Britain did very little to repay this loyalty.

Sally McLean grew up steeped in stories of Burma. Her grandfather had been headmaster of a government school there while it remained a British colony, and she found herself drawn to the region. Not initially to Burma itself – which for years was in lockdown under a repressive military junta – but to camps in Thailand where refugees from Burma’s decades-long civil wars fled for safety. Many of them were, like Saw Berny, from the Karen ethnic minority.

There, in 1988, in a primitive clinic in one of the camps, Sally chanced upon an ageing former pupil of her grandfather’s, Saw Joshua. More than 50 years earlier he had been recruited into the British Army’s Burma Rifles and had then fought proudly for Britain in World War Two.

He was “still perfectly lucid” at the age of 87, McLean recalls.

“He reeled off his name, rank, number and the name of his commanding officer. When I asked him what he would like me to do for him, he replied that I should ‘inform his officers’. His own poverty – one pair of trousers, no medication for his asthma – was clearly secondary.”

McLean was deeply moved. She felt that as a veteran of the British Army he must surely be entitled to some sort of support from Britain in his time of need.

But it turned out that he wasn’t entitled to anything.

If Saw Joshua had been a veteran from a former British colony that remained in the Commonwealth, such as Ghana, Uganda, or India, he would have received financial, medical, and other forms of assistance from charitable organisations such as the Royal Commonwealth Ex-Services League. But when Burma gained its independence in 1948, unlike most other former colonies, it chose not to remain in the Commonwealth.

Though some efforts were made by British veterans’ charities to help these men, the country’s growing isolation meant even that limited help eventually dried up.

McLean soon discovered that there were several other former British soldiers in the Thai camps, but she was only too well aware that there were thousands more in Burma beyond her reach.

In the early 2000s, though, this began to change – Burma began to open up to the outside world. So in 2007, 19 years after her meeting with Saw Joshua, she founded Help for Forgotten Allies, or H4FA. The charity aims to recognise the contribution made by these veterans before it’s too late.

Late last year I accompanied H4FA to the town of Hakha in Myanmar’s Chin State, one of the country’s most remote and inaccessible corners. There McLean tracked down Liau Chang, a former scout in the British Army.

Even at 93, he still retains a spark of the fearless teenager he once was, and gladly retells his war stories more than 70 years later.

“What would have happened if the Japanese caught you?” asks McLean.

“They’d have peeled off my skin and poured salt underneath. Like they did to the others.”

McLean doesn’t flinch. She dutifully writes down everything he says in her notebook, and asks how H4FA can help make his life a little easier.

Later another veteran, aged 91, appears on a motorbike. He has driven across town after getting wind of McLean’s arrival.

“We knew you would come back, we never forgot you. We always remembered you at heart,” he says.

Accompanying McLean is a fellow trustee of the charity, Peter Mitchell, himself a British Army veteran.

He receives salute after salute from old soldiers, men who could have fought alongside his father, who served in this area bordering India in World War Two.

Shared history overcomes the many language barriers. Through an interpreter, Mitchell and a veteran compare memories of British Army parachute training. They recall the same shaking knees, the same roaring engines, then: “Red. Green. Go!” they both shout in English.

The small annual grants of roughly £120 and support for urgent medical care H4FA provides can be life-changing for the old soldiers and their widows. Almost all are now in their 90s, and living in poverty in a country with no welfare system and few, if any, public health services.

But it’s not just about the money – it’s the personal touch that’s important, says Mitchell. “We’re doing everything we can to give them the feeling that they are being acknowledged for what they did, and that they’re being remembered.”

While Sally McLean and Peter Mitchell journey through Chin State, Duncan Gilmour – another of the H4FA team – is on his annual visit to meet veterans in Kayah State, in eastern Myanmar.

As he picks his way along a faint footpath in head-high grass, not far from where Saw Berny fought his deadly guerrilla war against the Japanese, he’s following in the footsteps of his grandfather – Lt Col Edgar Peacock.

Peacock, part of Britain’s elite Special Operations Executive (SOE) Force 136, was parachuted behind enemy lines at the impressive age of 52 with orders to mobilise indigenous volunteers such as Saw Berny.

Gilmour’s first stop is to the house of Saw Tun Thein, a former driver in the Royal Engineers. Now aged 90 and with barely any English, he can still deliver a powerful rendition of God Save the King – accompanied by a sharp, smart salute.

Holding Gilmour’s arm in a powerful grip throughout their conversation, Saw Tun Thein is clearly relishing the chance to share his stories from the war. His own present-day needs appear to be less urgent, but Duncan persists in asking what H4FA can provide.

“Scuba gear,” is the unexpected reply.

It turns out Saw Tun Thein knows where the retreating Japanese troops dumped a large amount of weaponry in a nearby river, and despite his advancing years he’s keen to get his hands on it.

Even though this is a journey he’s made several times, Duncan never fails to be moved by warmth of his meetings with the veterans, and the loyalty to Britain that’s survived more than seven decades.

“They always believed that we were their friends, they always say. ‘We knew you would come back,'” he says.

Whatever the truth of this saying, H4FA has ample evidence that even these old soldiers die eventually. Each year the list of known veterans who fought with British armed forces shrinks. There are currently just over 100 scattered across the country.

“We haven’t got time on our side,” says McLean.

Helping make the last years of these old soldier’s lives as comfortable as possible goes some way to making up for the years of past neglect.

But there are some on this list that H4FA will never reach, either because of Burma’s internal conflicts make them no-go zones or because of the lack of usable roads.

In Yangon, despite daily hardships, Saw Berny remains positive. He draws on his Christian faith to retain hope not just for the future of Burma, but for his old allies back in Britain too.

“Every day I pray for Britain, for all the British people. I even pray for Prime Minister Theresa May,” he tells me, before pausing thoughtfully.

“She is still prime minister, right?”

Alex Bescoby is co-founder of Grammar Productions and the producer of Forgotten Allies: the search for Burma’s lost heroes