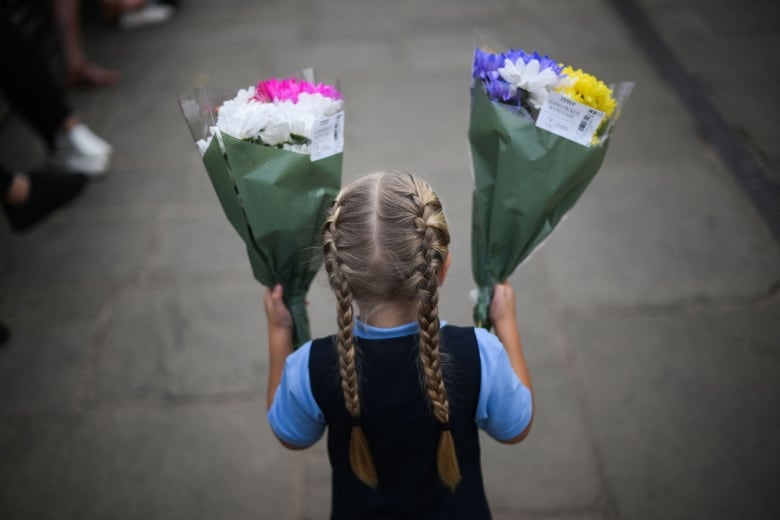 Our planet is changing. So is our journalism. This weekly newsletter is part of a CBC News initiative entitled “Our Changing Planet” to show and explain the effects of climate change. Keep up with the latest news on our Climate and Environment page.

Sign up here to get this newsletter in your inbox every Thursday.

Over the past few weeks, as a tribute to the late Queen Elizabeth, mourners laid hundreds of thousands of bouquets at royal residences and parks across the U.K.

As moving as some found it to see Buckingham Palace, Balmoral, Sandringham and Windsor Castle awash in a sea of floral tributes, others saw something else: plastic.

In central London’s Green Park last Monday — one of many locations where people left flowers — workers bundled bags of discarded plastic wrappers and cellophane from bouquets left in honour of the Queen. In images posted in the Daily Mail, volunteers were seen cutting wrappers from bouquets, and a large flat-bed truck was stuffed with dozens of bags of the plastic waste.

Becky Feasby, a sustainable florist and owner of Prairie Girl Flowers in Calgary, said she had two thoughts when she saw the royal tributes. First, that the bulk of those flowers was likely imported. Second, she was struck by the “sheer volume of plastic wrapping.”

“The amount of single-use plastic waste is truly staggering,” said Feasby, who is also working on her master’s degree in sustainability at Harvard University.

When thinking about harmful environmental practices, it might not seem obvious to consider the flower industry — which, after all, celebrates beautiful blooms grown of this earth.

“We think of them as gestures of kindness or empathy or affection,” Feasby said. “But the reality of the global flower industry is that the bulk of our flowers are grown in the Global South and transported worldwide in refrigerated cargo jets and trucks, wrapped in plastic and arranged in toxic floral foam.”

Depending on where the flowers come from, there’s industrial farming and the effects of pesticides, fertilizers or water-hungry greenhouses to consider, said Kai Chan, a professor at the Institute for Resources, Environment and Sustainability at the University of British Columbia, and a Canada Research Chair in rewilding and social-ecological transformation.

“When people come to learn about just how damaging the industrial farming of flowers is, it doesn’t feel like such a good gift,” Chan said.

There’s also the carbon footprint of importing exotic or out-of-season blooms — and quickly — to keep them fresh. Canada imported $137.8 million in cut flowers and buds for ornamental purposes in 2020, largely from Colombia, Ecuador, the U.S. and the Netherlands, according to Agriculture Canada’s Statistical Overview of the Canadian Ornamental Industry.

Then there’s the packaging, which often includes the green floral foam that flowers are arranged in, and which has been shown to contribute to the world’s microplastic pollution. Finally, wrap it all up in a plastic or cellophane sleeve.

Only nine per cent of plastic waste worldwide is actually recycled, with the bulk winding up in landfills, according to a 2022 OECD report. But the kind of wrapping used to package flowers is also light and flimsy, Chan noted, and thus likely to blow out of a landfill and into a nearby river, lake or ocean.

If you love fresh flowers — as a gift, a tribute or for yourself — there are plenty of ways to make environmentally friendly choices. Support for increased sustainability in the floral industry is increasing thanks to organizations such as the Sustainable Floristry Network and Slow Flowers, Feasby noted.

You can support locally grown, seasonal flower farmers, many of whom may use regenerative and organic growing practices. Look for florists who sell their bouquets in recycled paper or reusable glass vases.

This may mean buying your blooms from a local farmers’ market or directly from a sustainable florist, and it may mean spending a little more money than you would at the grocery store checkout line, Chan said.

“It can still look beautiful, and it will be more meaningful. And arguably, that’s the point.”

As for the flowers that adorned the Queen’s coffin during her funeral on Monday, they were local and meaningful: cut from the gardens of Buckingham Palace and Clarence House, they included myrtle grown from a sprig saved from the monarch’s 1947 wedding bouquet.

Amid the ongoing challenges of reducing one’s carbon footprint, Marilyn Jones had this to say:

“It’s time to go back to clotheslines — at least for sheets and towels.  Many people have never known the fresh smell of sun- or wind-dried linens.”

CBC News recently launched a dedicated climate page, which can be found here.

Also, check out our radio show and podcast. The hunt for the heat beneath our feet: this week on What On Earth, we bring you a feature report from atop a volcano in B.C., and explain why a Calgary company is trying to unlock the geothermal energy within. What On Earth now airs on Sundays at 11 a.m. ET, 11:30 a.m. in Newfoundland and Labrador. Subscribe on your favourite podcast app or hear it on demand at CBC Listen.

So much of modern life relies on computer servers — from our social media posts to our banking transactions to the documents we share at work. Our increasing dependence on cloud computing has led to the rise of massive server farms — including one in China that’s reportedly more than one million square feet in size. More (and bigger) server farms means more electricity generation, and that proposition often means more carbon emissions.

Some engineers have been looking at ways to harness this processing power for something beyond data storage and retrieval. The fact is, all those whirring computers give off immense heat, which can in turn be used for energy. In 2017, the BBC did a story on data centres in Stockholm, Sweden, being used to heat homes. They do this through direct liquid cooling (DLC), which, through a system of water pipes, transfers heat away from servers. A similar system has been used in Helsinki.

Last year, there were reports that cryptocurrency mining operations — often seen as environmentally dodgy, given that they require huge amounts of processing power — could provide a novel form of heating for buildings in North Vancouver.

Researchers are diving deep in the Arctic looking for kelp forests

Divers are wrapping up an expedition in Cambridge Bay, Nunavut, after weeks of studying seaweed biodiversity.

Over the past few weeks, researchers have been working to track and understand what effect climate change is having on seaweed along the coastal waters of Canada’s Western Arctic. They also hoped to map and study the ecology of Arctic kelp forests in the area.

“There’s kind of an idea that there’s not really any kelp forests around here and there’s not as much seaweed. And so we’re kind of looking to see if that’s true,” said Amanda Savoie, a research scientist with the Canadian Museum of Nature in Ottawa and the director for the Centre for Arctic Knowledge and Exploration, who is leading the project.

Ocean temperatures play a big role in where seaweed grows around the world, Savoie said. As waters warm, the distribution of seaweed species changes, and the Arctic and Antarctic are expected to be the most negatively affected by this.

“We know that the species composition will change and Arctic kelps will have nowhere else to go when the water gets too warm. But other kelps will move up from the South,” Savoie said.

“We’re really trying to just figure out what’s going on right now, so that if things change in the future, we’ll have a baseline to look back to for this area.”

Joining her as part of the research program is a team of scientists affiliated with the ArcticNet-funded project ArcticKelp, along with Laval University and Fisheries and Oceans Canada. So far, the ArcticKelp project has studied and mapped kelp forests in the Eastern Arctic and this partnership will extend the knowledge to the Western Arctic.

Savoie visited Cambridge Bay this spring to meet with community members and the local Hunters and Trappers Organization, where she learned that some in the community are interested in seaweed as a food source. She said local knowledge has been crucial in finding dive sites.

“We have a local guide who’s been taking us out scuba diving on his boat and without him, this study wouldn’t be happening. He’s so important to our work,” she said.

“I think people are interested to know what we find in the marine environment in general around Cambridge Bay — if there is potential for harvesting kelp in this area.”

Because tides are smaller there, researchers need to scuba dive to access the seaweed.

John Lyall Jr., their guide in Cambridge Bay, regularly takes tourists and divers out on the water. He said it creates an exchange of knowledge — he helps them, and in turn he sometimes finds new spots for diving or learns more about the land.

There are an estimated 175 species of seaweed known in the Canadian Arctic. The most recent taxonomic survey dates back more than four decades. The Arctic specimens collected from R.K.S. Lee’s research in the 1960s and ’70s number in the hundreds and are curated in the National Herbarium of Canada in Gatineau, Que.

Savoie and her colleagues hope to add to that collection and will be collecting and identifying seaweed species along with DNA data.

“I’m going to be sequencing things that I collect back at the museum to compare their DNA essentially to other seaweed collections from the Arctic and from the Atlantic and Pacific.”

Savoie said there is evidence of kelp in the area, “which is really exciting,” but scientists have yet to observe an actual kelp forest. These habitats are like tropical rainforests — hotspots for biodiversity, hosting other seaweeds and providing food and shelter for fish and invertebrates.m

The multi-year program began in August and wrapped up this week. Savoie said she hopes to return next year.

“With this baseline, we’ll be able to compare and see the change. We don’t know what the Arctic’s going to look like in 20 or 30 years … I think it could be quite different than what we’re seeing now.”