The End of Pretty Little Liars: How the Series Is Saying Goodbye After 7 Seasons 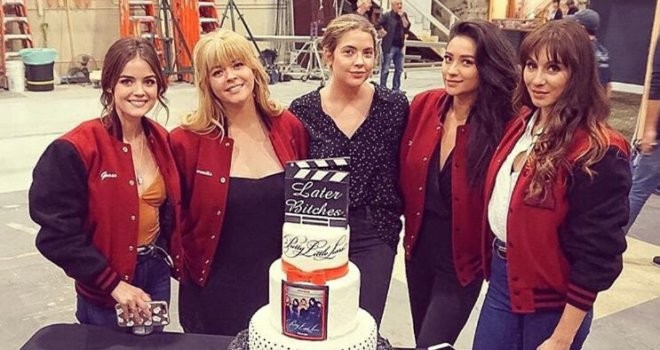 The game is almost over.

After seven seasons, Pretty Little Liars is about to reveal the final identity of A and say goodbye for the last time. Over the years, probably hundreds of mysteries have been presented, solved, unsolved, and reopened to the point where we’ve forgotten many of the questions the finale still has to answer, but for executive producer I. Marlene King, writing tomorrow night’s finale wasn’t nearly as daunting a task as it may seem like it should have been.

“It helped that we knew what the mystery reveal was going to be a while ago, so the legwork was sort of laying the path to being able to write that episode without having to go back and fix anything we might have screwed up,” King tells E! News. “We did a pretty good job of not screwing up, and it was really fun to write. But there were a couple scenes that were painful to write because they felt like goodbye scenes and they left me in tears. But I think that it’s all good.”

King and the writers knew how the series would ultimately end for two years now, since the midseason finale of season five where it was established that Alison’s secret sibling Charles—later revealed to be Charlotte—was Big A.

“I think if you go back, start watching from the 5A finale, moving forward there are definitely clues,” she says, and she fully encourages fans to play detective. “We intentionally wanted to make it possible for fans who were really paying attention to figure out the answer. There are people who have it right.”

While the big reveal of the identity of AD (also known as Uber A, who is different from both A and Big A) is, of course, a major part of the finale, but keeping that particular bit of info a big surprise is not necessarily what King was concerned with.

“Yes, it’s fun, we want to know who AD is, but to me, it’s always been more interesting to reveal the how and the why,” she says. “So that’s going to be an exciting part of the finale, in addition to who it is.

If you, like us, were kind of hoping for the longest, most in-depth villain monologue of all time to explain some of AD’s more insane accomplishments (like the inner workings of that board game), King laughed at that suggestion (even though we were totally serious).

“There are definitely some flashbacks that are very telling and a big, fun, interesting part of the story,” she says as to how the how and why will be revealed. “Yeah, there’s a little story time involved, but it’s very compelling.”

Tuesday night’s finale won’t be your typical episode of Pretty Little Liars. While, according to King, it will be filled with romance, drama, and sexy time, at two hours long (or one and a half with commercials), it’s more like a movie than an episode.

“It is structured in a way that you could sit in a movie theater and watch it,” King says. “It feels like a big, bold movie.”

Or to put it a different way, it’s an entire but very short season of the show.

“Most of our finales answer some questions but leave you with questions, and that launches into our next premiere. But I feel like this is the reverse,” King says. “It feels like the first part of it is a premiere, and the last half is a final finale. So it feels like a premiere and a finale all in one.”

In preparation for the end, King studied the show’s premieres and finales, “trying to learn from fans’ reactions to those things,” and specifically went back and watched the pilot.

“I wanted to get that feeling, that full circle moment of completing something that we started,” she says. “Hopefully we leave people very satisfied.”

For King personally, she says the biggest thing she’s learned over these seven seasons is to slow down and enjoy herself.

“Your energy level just rises to this point that you never thought was possible,” she explains. “I think I got stressed out about a lot of things early on and then realized that, you know, this is fun. Just have fun, and I think that shows on the screen.”

While the finale may have been relatively easy to write, King says filming certain final scenes was another matter entirely.

“There is a scene where the pretty little liars are saying goodbye to one character, but it was such an emotional ending for all of them, and all of the crew, like these grown men were crying as we were shooting this scene,” she recalls. “When you spend seven years with people, they become your family. This has been a chapter or an era of our lives that’s going to be very memorable.”

Of course, in this day and age, more and more closed chapters of TV shows are opening right back up again, so the liars may not be gone for good.

“[The finale is] definitely a complete end to the show, but that said, I’ve always said if the opportunity would arise, years from now, there’s always a way to reinvent this world.”