‘The door’s been slammed shut on me’: Sixties Scoop survivor from N.S. denied compensation 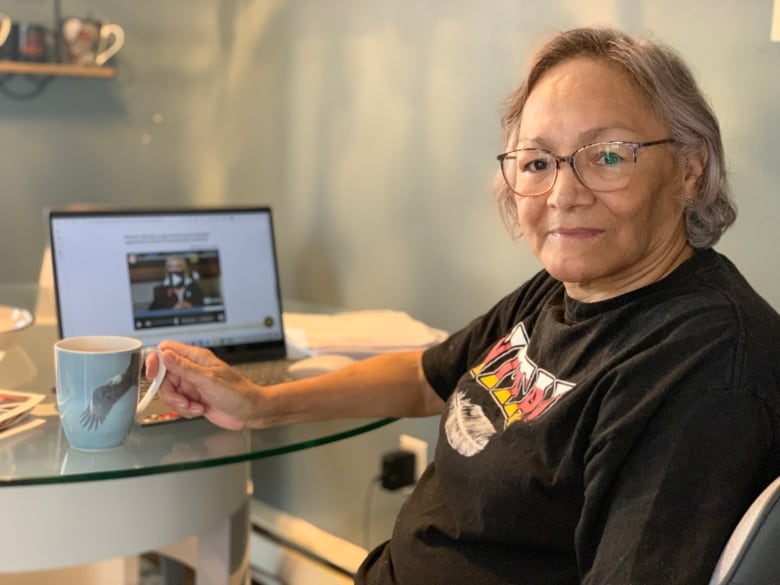 Debbie Paul sits at the kitchen table at her home in Sipekne’katik First Nation, N.S., and combs through her Sixties Scoop folder — a collection of legal documents, letters and faded photos of herself as a child at the former Shubenacadie Indian Residential School.

The folder holds a paper trail of Paul’s journey. She has been looking for justice for years, and a letter she got last week makes her feel like she is no closer to a resolution after all her work.

“Now it seems like my validation, they took it away from me,” Paul said.

The letter is a final rejection from the Sixties Scoop Class Action Settlement agreement, meant to grant personal settlements to “Status Indian” and Inuit children, who were taken or “scooped” from their parents and communities between 1951 and 1991. They were put into the care of non-Indigenous families, became Crown wards or were placed in permanent care settings.

Paul points to the words “official rejection” and “no action possible.” Those words stand out at the top of a one-page letter.

“The door’s been slammed shut on me,” she said. “I have no recourse. This is Canada. We’re supposed to be a free country. I should be able to appeal that decision.”

According to the Crown-Indigenous Relations and Northern Affairs Canada web page, “Eligible class members will receive an estimated $25,000 in compensation for harm suffered as a result of their experiences in the Sixties Scoop.”

When applications closed in December 2019, 34,770 people had applied. As of last month, 19,822 claims had been approved. An additional 10,251 claims have been denied with no right to appeal.

In 2020, Paul’s claim was rejected for the first time.

She was told she had no proof that she was kidnapped by a nun when the Shubenacadie institution closed in 1967 and brought to live with a white family in Massachusetts for a year. She says that throughout that year she was abused and forced to act as the family’s housekeeper, then sent back to Nova Scotia alone with no explanation.

After Paul travelled to the U.S. in November 2021, she found proof that traced her back to Rockland, Mass. She sent in every official document she could gather, and appealed the rejection with no legal help.

The reason for the final rejection is listed as the inability to confirm that Paul was placed in “long-term care” with non-Indigenous guardians.

“I didn’t make up those stories,” Paul said. “It’s what really happened to me.… I have it here. I have proof.”

Claims processes can be traumatic

“And when you’re denied a claim or your claim has been lowered … you start to feel unworthy or not believed, or that what happened to you didn’t matter in the eyes of the government,” Nevin said.

“Because essentially they’re saying because [Paul] wasn’t compensated, that her abuse wasn’t worthy of compensation. Whereas I would say that it’s very worthy.”

When Paul got in touch with a representative for Collectiva, the administrator of the settlement agreement, she was told she was rejected because she was in care for less than five years.

“I was taken away, 12 years old. And it wasn’t long enough.… According to [the rejection letter], I didn’t suffer long term. Excuse me. It’s a lifetime. If it happened once, it’s a lifetime.”

The five-year eligibility requirement is listed on the administrator’s website, but was not on the application form Paul filled out in 2018.

She said she wouldn’t have undertaken the painful process if she had known about a five-year stipulation.

“If that was made up front, the eligibility, you know, it would have saved a lot of people grief,” Paul said. “When your memories come on and you look at old pictures, you’re transported right back … you don’t forget.”

Doug Lennox is one of many lawyers across the country working on the settlement. His firm, Klein Lawyers LLP, is listed as counsel for applicants in the British Columbia area.

The communications firm for the class action settlement agreement referred CBC News to Lennox as a spokesperson.

Lennox said he has clients who were approved under the settlement who were in care for less than five years.

He suggested Paul should speak to her lawyer “to review her rejection notice and to understand it and to see if there are any further avenues for her.”

“We try [very much] to encourage claimants to reach out to one of the law firms and to get help because it’s a complicated process,” Lennox said.

Paul said she had to go through the settlement agreement application process with no guidance.

In the settlement agreement, the federal government provided $75 million in legal fees to counsel for the plaintiffs.

Toronto law firm Koskie Minsky LLP is listed as the free legal counsel for applicants in the Atlantic provinces. But each time Paul tried to reach a lawyer at Koskie Minsky, she said she was either directed to a call centre or told to leave a message. She says she never received a call back.

Lennox said he can’t comment on another firm, but he wants as many applicants as possible to succeed, even if it’s not under the Sixties Scoop agreement.

“Not all claims are successful, and that’s the case with any class action. In some cases, there are claimants [where the] claim doesn’t fit this class action, but it might fit another one,” he said.

Lennox suggested Paul send her rejection letter to his firm, so she can get a better explanation.

Paul hopes this is not the end of her journey. She said she wants to find new legal counsel with expertise in this subject matter and revisit her rejection notice.

She also wants to contact some of the 10,251 other people across the country whose claims have been denied, and work with them.

“There [are] people still out there in my situation,” she said. “We belong. We fit [somewhere] in the mix. You know, the harm was still done. We are living it.”