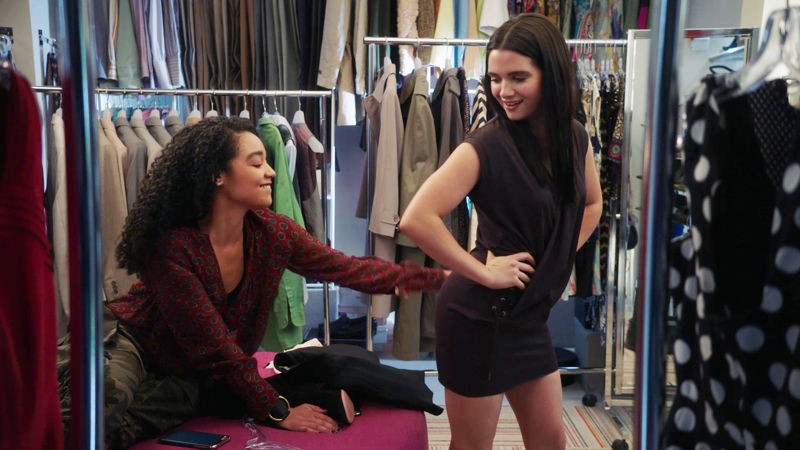 Jane’s got some serious options to weigh on The Bold Type.

After getting a pretty sweet-sounding job offer from another publication in last week’s episode, Jane (Katie Stevens) has enlisted her friends to help her determine which path is the correct path for her in the opening of this week’s new episode. Obviously, Kat (Aisha Dee) and Sutton (Meghann Fahy) aren’t much help, since they’d both prefer that she stay at Scarlet.

In the above clip, exclusive to E! News, Jane, Kat, and Sutton sit in the back of a cab in a Donald Trump-related traffic jam as Jane goes over her written list of pros for keeping her job, and pros for taking the new one. (Side note: written lists of pros and cons are never a good idea on TV shows.) But by the end of the clip, Jane seems to abandon her list in favor of leaving her fate up to the cab driver.

“If the cab goes left at 34th, then that means that I stay at Scarlet, and if it goes right, then that means I go to Insight,” she declares. But of course we’ll have to wait to find out which way it ends up going.

Meanwhile, Kat’s glued to her phone as usual, and Sutton is ready with her eye liner to make some helpful additions to Jane’s list.

This week’s episode finds almost the whole gang—Jane, Sutton, Alex, and Pinstripe—stuck in the Scarlet office due to the traffic jam and protests, where card games are played and revelations are had, while Kat deals with another major roadblock in her potential relationship with Adena.

The Bold Type airs Tuesdays at 9 p.m. on Freeform.