The blow-by-blow of what to expect from Hurricane Dorian 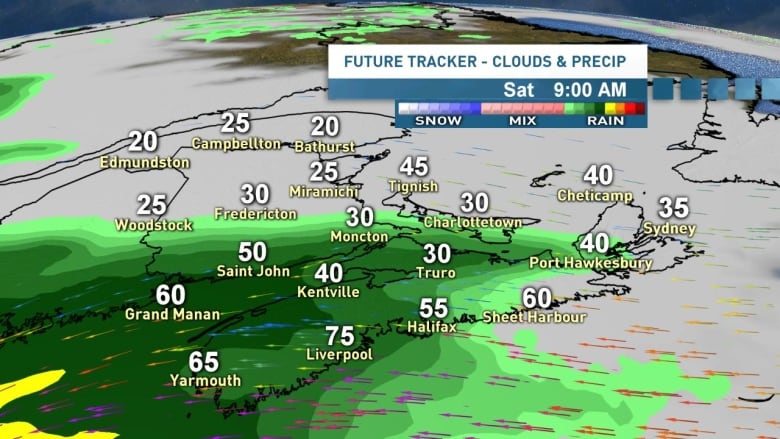 Hurricane Dorian is on its way, and although its exact landfall remains uncertain, Nova Scotia can expect to be lashed with heavy rain and powerful winds.

The storm will likely arrive as a Category 1 hurricane and is expected to make landfall between the South Shore and Cape Breton on Saturday evening. As of Friday afternoon, the Halifax region was looking like the most likely location.

Widespread sustained winds of more than 60 km/h are likely for all of Nova Scotia, southeastern New Brunswick and P.E.I., with gusts of 90 to 110 km/h, forecasters say.

Along and to the right of Dorian’s track ⁠— from the South Shore through Halifax and central Nova Scotia to eastern regions, Cape Breton ⁠and P.E.I. — winds gusts will likely reach 110 to 130 km/h, with exposed areas of the coast possibly reaching 150 km/h. Power outages are very likely.

The heaviest rain will fall along and to the left of Dorian’s track. A widespread area from central and western Nova Scotia to P.E.I. and southeastern New Brunswick will likely see rainfall of between 50 to 100 millimetres.

Within that region, we’ll likely see a swath of more than 100 millimetres, possibly 150 millimetres or more. Most of this rain will fall over a 12-hour period late Saturday and into early Sunday, and will certainly bring a high risk for localized flash flooding and washouts.

So, when does the storm arrive and when does it leave? Here’s a breakdown of what we can expect.

The first rain from Dorian will arrive in southern Nova Scotia overnight Friday before spreading into southern New Brunswick and central Nova Scotia on Saturday morning. However, the rain and the winds will be relatively light and manageable for most. If you can’t pick up what you need tonight or clean up the toys in the backyard, then Saturday morning will grant another opportunity.

As Dorian tracks closer, the strong winds and heavy rain will move into the southern shore of Nova Scotia and eventually into the Annapolis Valley, the Halifax region and southern New Brunswick. By mid to late afternoon, we’ll start to see gusts over 100 km/h along the Atlantic coastline, including Halifax. The rain will also pick up during the afternoon for central and northern New Brunswick, eastern Nova Scotia, Cape Breton and P.E.I.

Saturday evening — The meat and potatoes

The meat and potatoes of this storm will move through, fittingly, around supper time. For much of the Maritimes, the peak winds, along with some very heavy rainfall, will track through during Saturday evening. Have candles and flashlights ready.

Saturday night is going to be a tough one for sleeping across the Maritimes. While the strongest winds and heaviest rain will start to ease across southwestern Nova Scotia and western New Brunswick, and then eventually central regions, the winds will stay strong for most of the night. Meanwhile, winds in areas of eastern Nova Scotia, Cape Breton, P.E.I. and eastern New Brunswick will stay very strong throughout the night.

By Sunday morning, the rain will have ended for western and central Nova Scotia, as well as southwestern New Brunswick. However, it will be a breezy and cool morning. As Dorian continues to move north, things will remain stormy for Cape Breton, P.E.I. and eastern New Brunswick.

Dorian is almost certain to bring down some tree limbs and debris. Thankfully, Sunday afternoon will provide an opportunity to clean things up. The sun will break in for many, and winds will ease.

The exception will be northeast New Brunswick to P.E.I. and Cape Breton, where the winds will remain strong throughout the day.

Stay tuned for updates tonight on CBC News at 6 p.m. AT and Atlantic Tonight at 11 p.m. Meteorologist Tina Simpkin will be tracking the storm on the radio on Saturday morning and will take part in a Facebook Live around lunchtime. We’ll have updates online and on social media throughout the day.

Be sure to tune in for a special edition of CBC’s Atlantic Tonight at 7 p.m. Saturday. We’ll be live on TV and Facebook during the peak of the storm.

Keep up to date on Hurricane Dorian with the CBC Maritimes live weather blog.