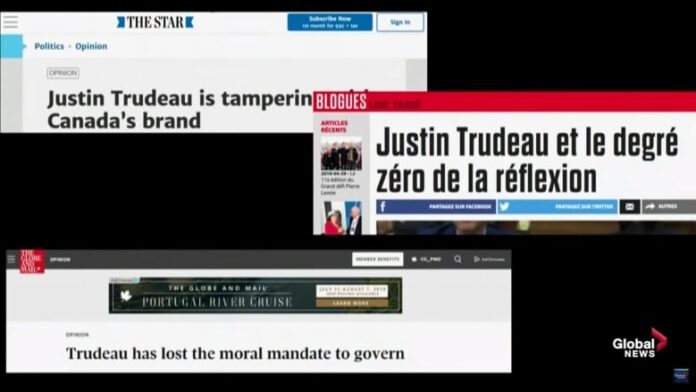 The video actually shows Trudeau telling a joke during the Parliamentary Press Gallery dinner and removes important context — such as the less-than-flattering headlines about him that Trudeau cited as his punchline.

It’s a small tweak that distorts the video’s meaning without sophisticated editing — but it’s effective because it plays on very real concerns and criticisms of the government’s so-called media bailout program.

The Parliamentary Press Gallery held its annual dinner in May. Politicians attending the event typically give speeches poking fun at themselves and the media. During Trudeau’s speech this year, he made a joke about criticisms of a government funding program that would provide nearly $600 million in tax benefits to Canadian news organizations over the next five years.

At this point, a number of headlines begin to appear on the screen — at the dinner, these were projected behind Trudeau. The headlines include one from the Toronto Star that reads “Justin Trudeau is tampering with Canada’s brand,” and another from the Globe and Mail stating, “Trudeau has lost the moral mandate to govern.”

Trudeau then quips “you don’t get stellar headlines like these without greasing the wheels a bit.”

However, in the edited video, those headlines are covered up by a still image from a Conservative Party of Canada campaign ad before the video fades out. The video has been shared online with titles such as “Justin Trudeau Arrogantly Brags About Bribing The Media.”

“This is an interesting example of how a tiny little cut or edit can make something that actually happened become misleading,” said Gordon Pennycook, an assistant professor at the University of Regina who researches disinformation.

“There’s been a lot of hand-wringing about ‘deepfake’ videos and that kind of stuff, but with selective editing you can do quite a bit to mislead people.”

Some viewers of the video on social media and YouTube have noted that the clip was meant to be a joke and has been taken out of context — but that hasn’t slowed its spread. As of publication, there were at least five versions of the video online, including one shared by third-party advertiser Canada Proud, with a combined view count of 268,864.

Facebook’s Ad Library also reveals Canada Proud briefly used the video in ads on the social media platform, which were shown to somewhere between 30,000 and 150,000 people. Facebook only provides estimates of how many people were shown an ad.

This kind of disinformation is particularly effective because it aligns with many viewers’ existing beliefs, said Samantha Bradshaw, a researcher on the computational propaganda project at Oxford University.

“People will share things even if they know it’s not true, just because it fits with their values and what they believe in,” Bradshaw said. “So if people are fact-checking that kind of content, it doesn’t matter what you say. People are going to share it anyway.”

This video in particular falls into that trap because of growing public distrust of the media and politicians, and a more specific worry that the media bailout might put journalists in a conflict of interest, said Aaron Wudrick, the federal director of the Canadian Taxpayers Federation.

“Part of the reason we think the media bailout is so corrosive is it plays right into the hands of the people who are spreading conspiracy theories,” Wudrick said.

“The fact that this bailout allows people to frame any type of criticism or any type of support of the government as being bought and paid for is very, very damaging to what is already a tenuous level of trust in a very important institution.”

Bradshaw said that anyone who is unsure about the source of a video can take steps to fact-check it or find its original context — by, for example, Googling part of the transcript or looking for clues in background imagery to where and when the video was shot.