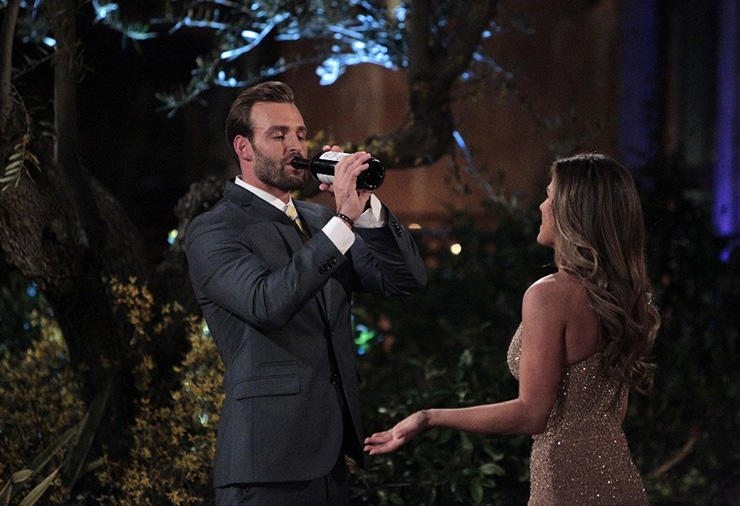 Thankfully, the rest of this week’s terrible two-on-one was not as terrible as we feared. Lee went home almost immediately, but first he got in one last lie about how he definitely didn’t tell Rachel that Kenny dragged him out of a van. Rachel realized he was not to be trusted, and with no punching and no more yelling, he was gone.

He wasn’t actually gone, since he really just kept sitting there with those fuzzy pillows, but that was good for Kenny, because Kenny had to delay his helicopter ride with Rachel to go close things out with Lee.

Rachel was confused by this, but Kenny explained that he just needed closure and to say everything he wanted to say. That’s fine. As long as we never have to hear from Lee ever again, everything’s cool.

Rachel still needed a moment with Kenny, and they had a lovely little moment, if a bit awkward. However, we’re worried that Kenny might have been overly stressed by everything that happened with Lee, and he broke down a bit during a video chat with his daughter.

After Rachel returned to the other dudes, it was rose ceremony time. She knew exactly what she wanted to do, and that was to send Anthony and Josiah home. We cry for Anthony, but the “abundantly confident” Josiah has been annoying for weeks. He did not take his elimination well, but that’s to be expected.

Rachel then went on a one-on-one with Eric, who was so excited to finally have time with her that he just kind of unleashed his entire personality at once.

They clearly had a lot of fun at their carnival, and then Eric told Rachel about how he always wanted his mother to love him, and she never showed that to him. They had a lovely little conversation about expressing emotion, and seemed to genuinely have a good time together.

Eric got the rose, and it’s been such a long week of awkward one-on-ones that it felt really good to watch him get that rose.

For the next group date, a bunch of the guys got to dress up like vikings and fight each other. It was a fun time, and it ended with a showdown between Kenny and Adam. They were both bleeding by the time Kenny knocked Adam out of the ring and won, but Kenny was obviously thrilled as they crowned him viking king.

After the viking fight, Rachel and Bryan reunited. They both missed each other sooooo much, and Rachel thinks he really gets her, flaws and all. She also chatted with Kenny, who expressed a bit of uncertainty about staying when he really wanted to go home to his daughter.

Rachel ended up encouraging him to go home, and it was one of the sweetest, saddest breakups of the season so far. They had more chemistry in that goodbye than she has had with almost all the guys so far, but it made complete sense that Kenny needed to go home.

The group date rose ended up going to Peter, who didn’t stand out to us tonight any more than he stands out to us any other time, so not sure what that’s about.

Rachel and Will went to Sweden (from Denmark) on their one-on-one, but something was missing between them. It wasn’t quite Jack Stone levels of creepy awkward, but something was very off, if you ask Rachel. If you asked Will, it was the best date ever.

It got real awkward after that.

Rachel told Will that she felt like they were good friends, but not more than that. Will admitted he probably focused on the friendship more than the romance, and he left peacefully.

Then, it was time for yet another rose ceremony, and Rachel was really not looking forward to saying goodbye to yet another dude. She cried, she quoted Shakespeare, and she had to take a moment to collect herself down the hallway. In the end, she sent Alex away, meaning there are only six guys left: Peter, Eric, Bryan, Dean, Adam (and AJ), and Penguin Suit Matt.

The Bachelorette airs Mondays at 8 p.m. on ABC.