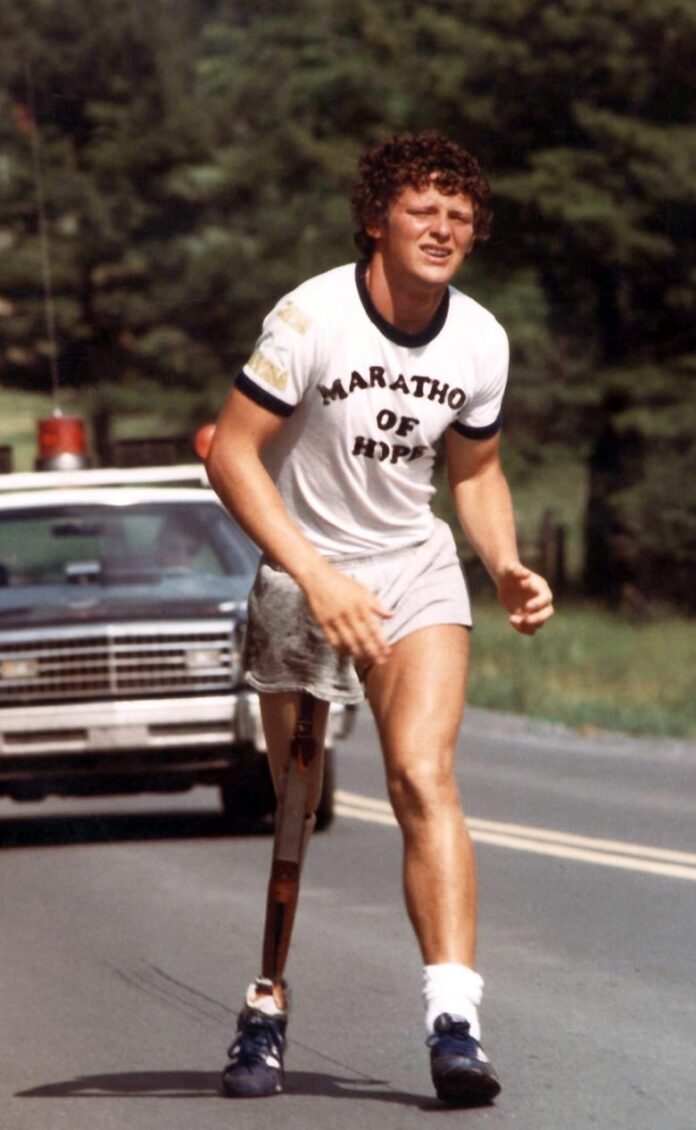 “It’s not supposed to end this way,” Bill Vigars remembers thinking as he watched a plane carrying Terry Fox, his parents, Betty and Rolly, and Dr. Geoff Davis take off from the Thunder Bay, Ont., airport on Sept. 2, 1980, en route to Vancouver where Fox would begin treatment for cancer in his lungs.

Vigars first met Fox as he ran through New Brunswick in the early days of his 1980 Marathon of Hope and immediately knew there was something special about the 22-year-old man from British Columbia who was running across Canada to raise money for cancer research. The marathon has inspired thousands of Canadians to run in Fox’s name for 40 years, something that doesn’t surprise Vigars, who got to know Fox well.

“There was no two sides to Terry Fox, what you saw was what you got,” said Vigars, who at the time was the director of public relations and fundraising for the Canadian Cancer Society’s Ontario division. “He spoke from the heart and so from the moment I met him I wanted to be part of this.”

Vigars soon became the public relations co-ordinator for the Marathon of Hope and a close friend and confidante of the young man whose right leg had been amputated when he was 18 as part of his treatment for osteosarcoma, or bone cancer.

As he ran, and for most public appearances, Fox wore a white T-shirt, blue Adidas running shoes and grey shorts, which meant his prosthetic leg was always visible, a rarity at a time when a cancer diagnosis still carried a stigma.

“Terry wore that leg proudly and he inspired others,” said Vigars, recalling the actions of one elderly gentleman.

“He had a peg leg and he started running along the fence of his property with Terry and shaking his fist and saying ‘You show ’em’, and that was burned in my mind.”

Vigars savours many moments from those months on the road — the laughter at the end of the day, the quiet conversations about life and love, and of course “the look on his face as he’s running, the determination, the focus that he had.”

But after 143 days and 5,373 kilometres, Fox stopped running just outside Thunder Bay. He had developed a heavy cough, was feeling increasingly fatigued and said it was time to see a doctor.

“Terry is with me every day… That stretch on the north shore [of Lake Superior], and that day in Thunder Bay are pretty emotional for me.– Bill  Vigars

The events of the next 48 hours are seared into Vigars’ memory. He, and Betty and Rolly Fox arrived at the hospital to join Terry where they learned the cough was due to cancerous tumours in his lungs.

The four of them decided to go to a nearby restaurant for a last supper together. They barely made it outside the hospital before the young man, who just hours earlier had looked the picture of health and vitality as he ran along the Trans-Canada Highway, collapsed in the street and was rushed back inside on a stretcher.

The next hours were a blur as Vigars worked to get the Foxes a flight back to B.C. before Terry’s lungs could fill with fluid and he would be unable to fly. But he does remember the ambulance ride to the airport, and Rolly saying to his son “This is so unfair. This is so unfair”

Vigars recalls Terry gently telling him, “No, Dad. It’s not. I’m no different than anybody else. People get cancer. Cancer comes back. … Maybe now, people will understand why I did this.”

WATCH | A look back at how Terry Fox inspired Canadians:

From his stretcher at the airport, Fox held a short news conference to explain why he was suspending his marathon and to express his desire to pick up where he left off once his health had improved, then boarded the plane.

Vigars gave him a hug, told Terry he loved him and watched forlornly as the plane took off, thinking “What now? What do I do? Where do I go? It’s not supposed to end this way.”

But the run didn’t really end there. That same day — Sept. 2, 1980 — Isadore Sharp, chairman and CEO of Four Seasons Hotels and Resorts, told the Fox family he was committed to organizing a fundraising run that would be held every year in Fox’s name.

Forty years later, a virtual version of the Terry Fox Run, is set to go ahead Sunday. To date, the event has raised more than $800-million for cancer research.

Vigars, now 73, has retraced almost the entire route of the Marathon of Hope. If not for the pandemic, he would have been in Thunder Bay to finally visit some of the spots that hold so much meaning for him.

“That stretch on the north shore [of Lake Superior], and that day in Thunder Bay are pretty emotional for me”, he said. “It’s like a movie that plays in your head and I want to go see the real sets.”

Vigars still plans to make the trip to northwestern Ontario, hopefully in the not-too-distant future, but he admits he doesn’t really need any reminders of the impact Fox had on his life, and the lives of countless others.

“Terry is with me every day,” said Vigars. “That grin, that big heart, that’s how I always remember him”

Bill Vigars was with Terry Fox for almost every step of his Marathon of Hope, until the day outside Thunder Bay that Fox was forced to stop because his cancer had returned. This weekend people all across Ontario will participate in a virtual version of the 40th annual Terry Fox Run to raise money for cancer research. The CBC’s Cathy Alex spoke with Vigars about his memories of Fox and why northwestern Ontario holds such special significance for him. 7:54