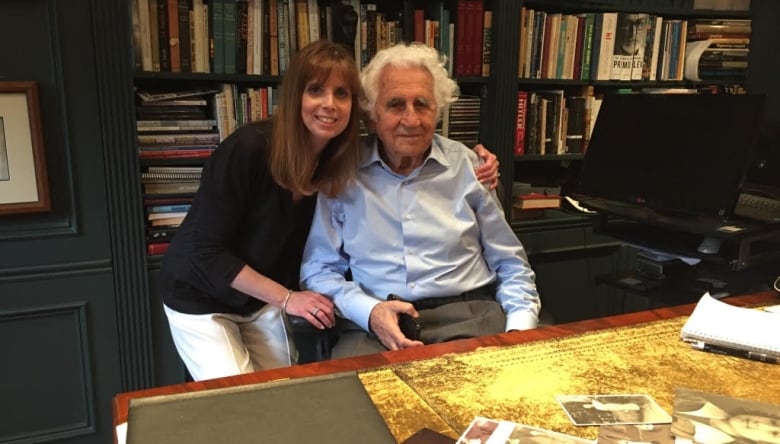 Michelle Glied-Goldstein says her late father Bill Glied, a Holocaust survivor, would be “heartbroken” to see the current spate of antisemitic incidents in Toronto schools.

In just over a month, Canada’s biggest school board has seen at least six events: from middle schoolers performing a Nazi salute in front of a Jewish teacher, to a hate-crimes investigation of three separate high schools being spray-painted overnight Wednesday with the same Nazi symbols.

“It truly is gut-wrenching,” said Glied-Goldstein, who runs an organization called Carrying Testimony to share the stories of Holocaust survivors.

“I definitely feel like there is a lot more of it in the last few years and probably in the last two years in particular.”

In Toronto, Glied-Goldstein is part of the school board’s response to this disturbing trend, and will be speaking to thousands of students in the schools where the incidents occurred, sharing her late father’s story through a presentation and a video interview with him.

But experts say what seems to be a rise of antisemitism in schools is not limited to Toronto, or the last month — and suggest a lack of education is part of the problem.

‘Not just a Toronto problem’

“This is not just a Toronto problem,” said Sinclair, who is  regularly in touch with Holocaust awareness organizations across the country.

“They all tell the same stories that they have antisemitism in all of their schools. They have swastikas painted on the walls of the schools. The Nazi imagery has gone out of control within the schools.”

Talia Freedhoff agrees with that. The Grade 12 student in Ottawa recently wrote an article for the Canadian Jewish News about her experiences moving to a public school after attending a Jewish private school. She says she’s experienced insensitivity to the needs of Jewish students, with  teachers scheduling tests or assignments on major Jewish holidays, and has heard from other Jewish students about overt antisemitism.

“I’ve heard of people who had swastikas drawn on school supplies,” said Freedhoff.  “I’ve heard a lot of really bad things … like money being thrown at Jewish students because they are Jewish.”

What was the Holocaust?

During the Second World War, the German Nazi regime persecuted and murdered approximately six million Jewish people throughout Europe. Jews were rounded up and sent to concentration or extermination camps to be killed with poison gas or subjected to forced labour. Some of the camps were also used for other groups persecuted by the Nazis such as Roma, homosexuals and political opponents. You can learn more about the largest of the Nazi death camps here: Life after Auschwitz.

‘They said I should go back to the gas chamber’

Antisemitism in schools is something Winnipeg father Ron East and his son Shai know well.

Shai says the bullying for being Jewish started when he was only in Grade 7, with a tap on the back from another student.

“He just told me that I was weird and freakish for being Jewish. He told me that he knows that we control the world and that we eat babies and a bunch of other lies that really hurt my feelings.”

It didn’t end there. The following year, he says, he was accosted by four boys with an antisemitic slur.

“They started calling me names. They said I should go back to the gas chamber, that I’m a k—.”

Shai’s father Ron complained to the administration. He said he was reassured but ultimately, nothing was done. Then, the pandemic started and schools went online. By the fall of 2020, Shai was off to high school.

Ron East says what happened to his son speaks to a broader problem within the school ecosystem.

Indeed, experts say a lack of education on the harms of antisemitism and the history of the Holocaust is at the root of these problems in schools.

Sinclair’s Liberation75 organization published a report last month in which they interviewed 3600 students in Grades 6 to 12. Only two-thirds of the students surveyed said the Holocaust happened and six million Jewish people were killed. Of the others:

Sinclair thinks the apparent uptick in school incidents of antisemitism in the last two years is no coincidence. Over that period, students have spent more time than ever online because of the pandemic, not only learning virtually, but also going on social media platforms, video game chat sites, and so on.

She says that Nazi imagery is more commonly seen in the news reports too, which makes it look more “normalized” in the eyes of the children, who may not understand the context.

“When the ‘Freedom convoy’ was happening and that one Nazi flag was being flown in Ottawa? That image was shown over and over again in social media. The kids see it. They don’t know what to make of it.”

Education for students and teachers

The solution, experts say, lies in education, for students, teachers and school administrators . Student Talia Freedhoff would like to see teachers better equipped on how to spot and respond to antisemitism they might see in class.

“I think that generally it is a lack of awareness because antisemitism is so hard to spot in comparison to a lot of other forms of hatred. And so, you know, often people just don’t know that it’s that bad.”

Holocaust educators Marilyn Sinclair and Michelle Glied-Goldstein would like to see learning about the Holocaust mandated within the curriculum, something they say is not currently the case in any province or territory.

In the meantime, Glied-Goldstein is happy to share her father’s story with as many schools as will have her, a story of how a young boy’s happy childhood was forever upended by hate.

She says she wants students to understand that the horror of the Holocaust started with exclusion, words and symbols, like the ones they’re seeing within their schools.

“We always say it starts with words, but it never ends there.”