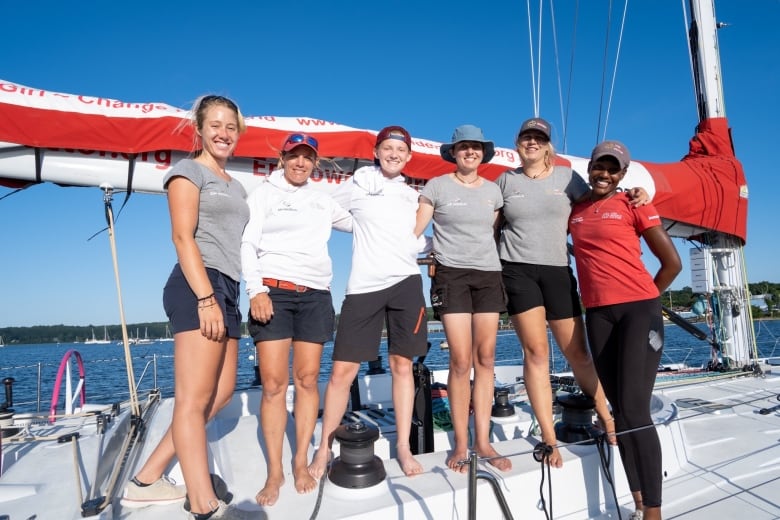 Eighteen-year-old Aren Hemmings planned to spend the summer in the Old North End of Saint John, studying photography and media marketing at the O.N.E. Future program at the Nick Nicolle Community Centre.

But when opportunity knocks — plans sometimes have to change. Fast.

Hemmings was unexpectedly invited to work for two weeks on Maiden, a 58-foot ocean racing yacht. The vessel is traveling the world promoting girls’ education and motivating women to enter careers in S.T.E.A.M.: science, technology, engineering, art, and math.

Maiden made headlines around the world in 1989-1990, when it broke records with the first all-woman crew to compete in the Whitbread Round the World Race. Purchased by former skipper Tracy Edwards and refitted in 2017, Maiden was relaunched as an educational vessel.

In January, the boat embarked from Dubai on a three-year, 90,000 nautical mile journey sponsored by DP World.

“There’s navigation, which is maths. Science has a lot to do with how you put sails up, how the wind angles work, all of those other things. Through sailing, we can demonstrate in a fun way, in an out-of-the-classroom kind of way, how all of these still skills can be used,” Edwards said.

The chance to be Maiden’s on-board photographer and reporter is a major opportunity for Hemmings, a 2021 Saint John High School graduate who describes photography as her “side hustle.”

“I knew that I was going to take some photography jobs during the summer – but I thought that would be graduations and maybe a wedding or two.

I did not expect this. To be honest, I was so happy, I cried.”

The opportunity came when the Maiden Factor team contacted Port Saint John’s Paula Copeland, the vice-president of engagement and sustainability, asking if she knew of any qualified female photographers.

Copeland asked Aren’s uncle, Saint John filmmaker and avid sailor Greg Hemmings — who realized his niece, who has more than photography skills, would be an ideal fit.

“When I was 16, I took the adult Learn to Sail program at the Royal Kennebecasis Yacht Club with Gary Sullivan,” Aren said. “We got a small daysailer for me and my sister’s birthday two summers ago, which was amazing. So that was perfect timing.”

“I recommended Aren to Maiden, especially once I learned of her own connection to sailing,” said Copeland.

“I really do judge people by how they respond,” said Edwards. “I emailed her, and she came back with ‘yes — when do you want me?’ That was the attitude. She literally dropped everything and we flew her to New York.”

Less than three weeks after the first email, Hemmings was on a 5 a.m. flight to the U.S. She immediately started documenting the two-week leg of the journey, which included stops in Brooklyn, Rye, and Long Island.

The biggest challenges, she said, were occasionally spotty internet access — and other unique conditions that arise when your workplace is the Atlantic ocean.

“Yesterday when we were sailing, I had all my gear out on my bed: I didn’t think anything of it. But then we were heeling – and the skipper came down and said ‘I think you need to see your gear down there.’

“There’s a lot of moving parts.  You have to be aware of your surroundings, and when others need help, you have to move quickly, ” she said.

Edwards had the chance to meet Hemmings in-person at a Maiden event with Hudson River Community Sailing.

“She’s actually still at the moment in Long Island, taking photographs and getting on really, really well with the crew,” Edwards said.

“We will definitely be inviting her back at some point.”

More New Brunswickers will have the chance to visit and learn from Maiden in early August, when she stops at Port Saint John.

Open-boat days, educational events, a gala at Marco Polo Cruise Terminal, a screening of the award-winning 2018 documentary Maiden at the Area 506 Container village, and a Q& A with Tracy Edwards are all in the works. A full schedule will be released in the coming weeks, said Copeland.

“We’re excited for our community to enjoy Maiden while she is in port and also raise awareness and funds for their important cause of promoting girls education around the world.”

For Hemmings, working on Maiden has inspired her to push the limits when considering her own future career — and taught her that when the right chance comes up, it pays to go all-in.

“You don’t need to take things so seriously. Things change quickly, and that’s OK,” she said.

“When the opportunity comes, you have to say yes to it.”