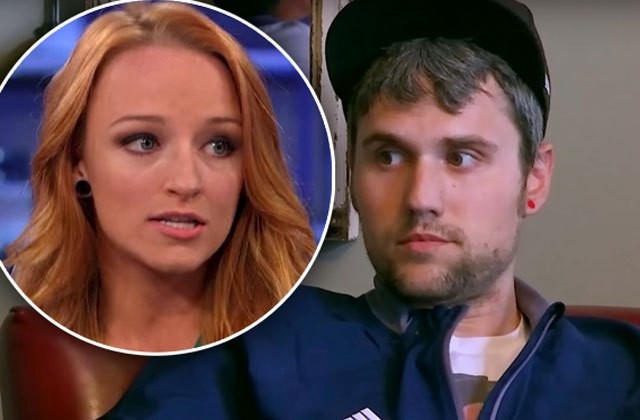 During tonight’s episode of the hit MTV reality show, the mother of three addressed her ex Ryan Edwards‘ substance abuse problems with her co-stars.

While on a birthday trip to Puerto Rico to celebrate Catelynn Lowell‘s 25th alongside her husband Tyler Baltierra, Amber Portwood and her fiancé Matt Baier, Maci broke down in tears over fears that her ex may one day do irreparable damage.

When asked how Ryan is doing by Catelynn, Amber interjects, “Ryan’s f–ked up. I watch it, I see it, I know it. Where he’s at right now, when I see him, I know where he’s at and I’m like, ‘Wow, he needs some guidance.'”

Maci added that she’s “talked to [Ryan] about going to a treatment center” and that her ex “would do it.”

However, she claims that “it’s everyone else around him that is too afraid to admit it.”

While fighting back tears, she tells her co-stars, “What I’m saying is that everyone else around him is too afraid of what it will look like more than his health…it’s all denial. They all know.”

Ryan and Maci welcomed their son Bentley eight years ago, and their struggles to co-parent have been documented for the world to see throughout the years on Teen Mom.

But nowadays, Maci says that the most difficult thing about Ryan’s issue has to do with how the father of her eldest son feels about himself.

“Honestly, the hardest thing is for me to see Ryan not love himself because he is a person worth loving. He deserves to love himself.”

Amber, who herself has publicly battled substance issues, tells her, “People forget that. You are so in love with the drugs that you feel if you wake up in the morning without them you want to die. So, should I die? It’s a feeling you can never f–king feel unless you’ve really been to the bottom. He needs to find where his bottom may be.”

Edwards has yet to speak about the substance abuse issues but fans of the hit series are sure to see more of what unfolds between the two exes.