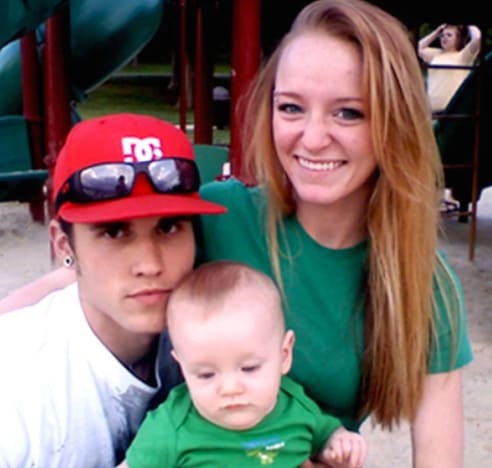 It certainly wasn’t your average wedding…

With only his parents there to witness the nuptials, Ryan Edwards married his longtime Mackenzie Standifer before heading off to rehab on the season finale of Teen Mom OG, airing on MTV on Monday. Noticeably absent is ex Maci Bookout and the former couple’s 8-year-old son, Bentley.

E! News reported the story earlier this month that the twosome had secretly tied the knot  on May 15 in Hamilton County, Tenn., according to court records. But now the network is giving fans a sneak peek into the highly popular story-line, which involves Edwards’ struggle with addiction, and his seemingly on-the-fly decision to marry his longtime love right before seeking treatment.

In the clip, Edwards comforts his mother Jen, who is upset at the fact that Bookout and her grandson are not at the wedding. The troubled reality star says that they’re going to keep the nuptials a secret from the child.

Edwards tells his father Larry, “I don’t think we’re [going to tell Bentley].” He continues, “If he does find out, we’re gonna sit him down.”

While his patient bride waits to the side, Edwards tries to reassure his mother who is crying because “the most important people are not here.” Presumably she means his ex and his son.

Edwards says to his emotional mother, “It don’t matter if there are 100 people or two people. It just matters as long as we love each other.”

Last week, Edwards resurfaced after his rehab stint. Multiple fan sites reported that the reality star spent part of Father’s Day weekend out boating with his new wife and their friends. The reality star also reportedly posted (then deleted) a photo of his wife the day before Father’s Day.

“Happy Father’s Day to the man who loves our kids unconditionally,” the new Mrs. Ryan Edwards shared on her private Instagram. “He loves us with a love that cannot be explained. He’s kind, patient, funny, everything we could ever ask for. I’m so thankful for him!”

During a recent episode of the MTV show,  Bookout addressed her ex’s substance abuse problems on a birthday trip to Puerto Rico with Catelynn Lowell and Amber Portwood. Bookout broke down in tears over fears that her ex may be on his way to causing irreparable damage to himself and others.

“[I’ve] talked to [Ryan] about going to a treatment center,” Maci told her co-stars through tears. “It’s everyone else around him that is too afraid to admit it.”

She added, “What I’m saying is that everyone else around him is too afraid of what it will look like more than his health…it’s all denial. They all know.”