Ted Cruz To Republicans: Do Not Compromise On Harsher Voting Restrictions 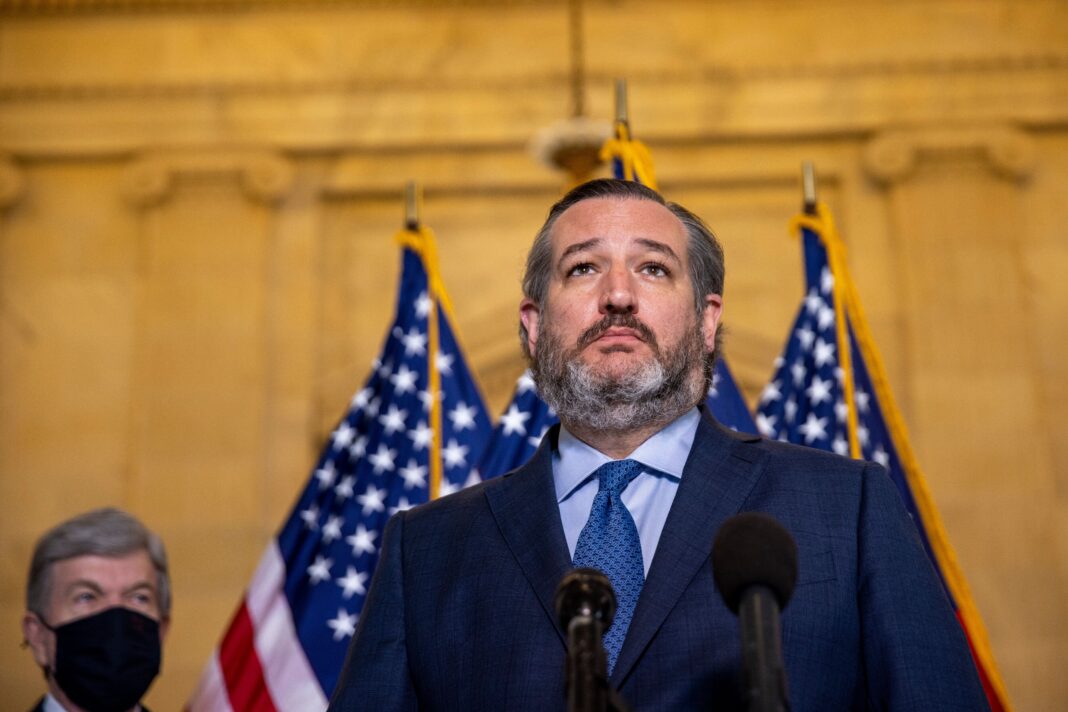 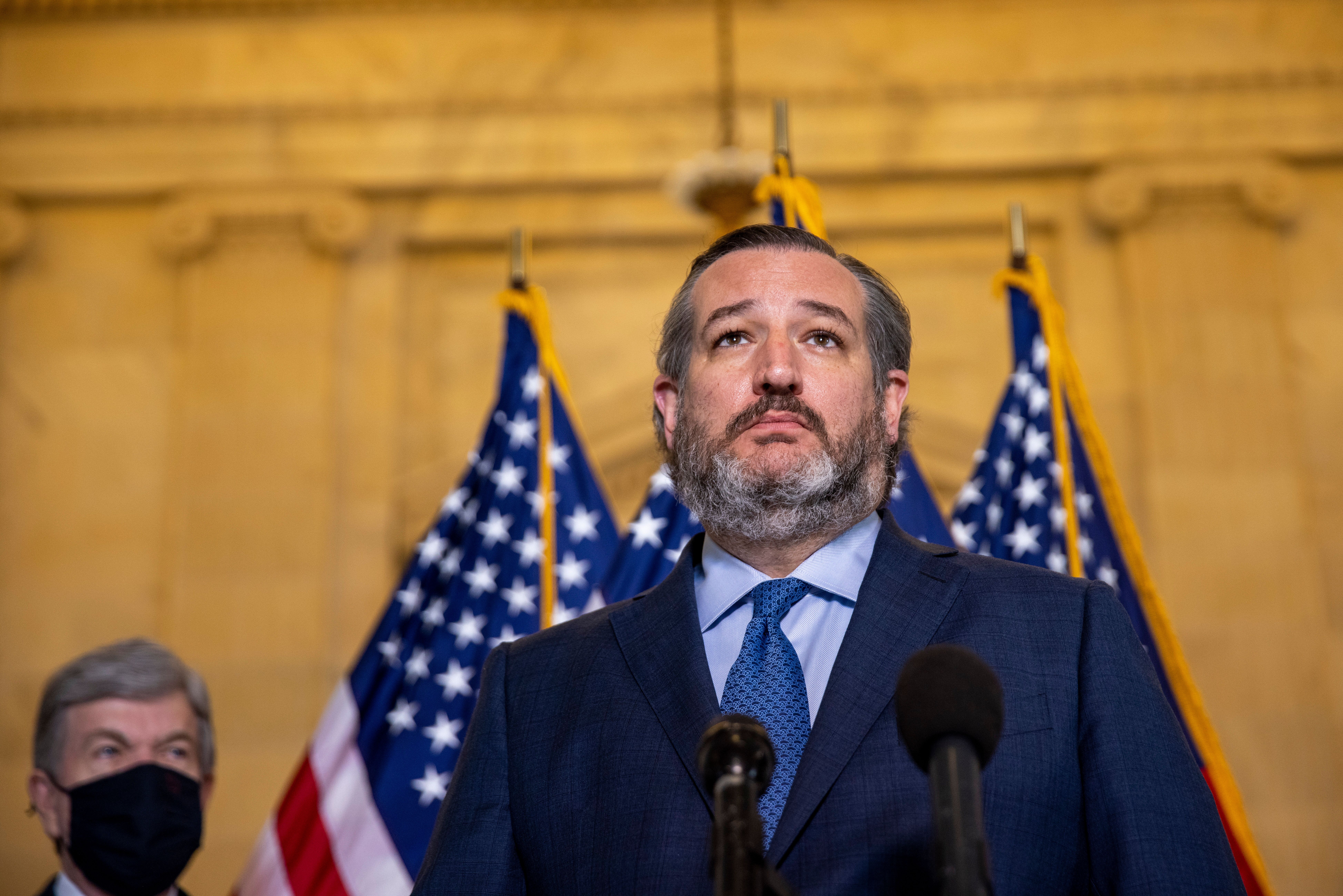 On an invitation-only call last week, Sen. Ted Cruz huddled with Republican state lawmakers to call them to battle on the issue of voting rights.

Democrats are trying to expand voting rights to “illegal aliens” and “child molesters,” he claimed, and Republicans must do all they can to stop them. If they push through far-reaching election legislation now before the Senate, the GOP won’t win elections again for generations, he said.

Asked if there was room to compromise, Cruz was blunt: “No.”

“H.R. 1′s the only objective is to ensure that Democrats can never again lose another election, that they will win and maintain control of the House of Representatives and the Senate and the state legislatures for the next century,” Cruz said told the group organized by the American Legislative Exchange Council, a corporate-backed, conservative group that provides model legislation to state legislators.

Cruz’s statements, recorded by a person on the call and obtained by The Associated Press, capture the building intensity behind Republicans’ nationwide campaign to restrict access to the ballot. From statehouses to Washington, the fight over who can vote and how — often cast as “voting integrity” — has galvanized a Republican Party searching for a unifying mission in the post-Trump era. For a powerful network of conservatives, voting restrictions are now viewed as a political life-or-death debate, and the fight has all-but eclipsed traditional Republican issues like abortion, gun rights, and tax cuts as an organizing tool.

That potency is drawing influential figures and money from across the right, ensuring that the clash over Washington’s legislation will be partisan and expensive.

“It kind of feels like an all-hands-on-deck moment for the conservative movement, when the movement writ large realizes the sanctity of our elections is paramount, and voter distrust is at an all-time high,” said Jessica Anderson, executive director of Heritage Action, an influential conservative advocacy group in Washington. “We’ve had a bit of a battle cry from the grassroots, urging us to pick this fight.”

Several prominent groups have recently entered the fray: Anti-abortion rights group, the Susan B. Anthony List has partnered with another conservative Christian group to fund a new organization, the Election Transparency Initiative. FreedomWorks, a group formed to push for smaller government, has initiated a $10 million calling for tighter voting laws in the states. It will be run by Cleta Mitchell, a prominent Republican attorney who advised former President Donald Trump.

Meanwhile, Heritage Action has announced a new effort also focused on changes in state voting laws. It included a $700,000 ad campaign to back GOP-written bills in Georgia, the group’s first foray into advocating for state policy.

So far, the states have been the center of the debate. According to a tally by the Brennan Center for Justice, more than 250 bills have been introduced in 43 states that would change how Americans vote, which backs expanded voting access. That includes measures that would limit mail voting, cut hours that polling places are open, and impose restrictions that Democrats argue amount to the greatest assault on voting rights since Jim Crow.

Trump’s lies triggered that push that he lost the presidential election due to fraud — claims rejected by the courts and prominent Republicans — and the Jan. 6 attack on the U.S. Capitol that those groundless claims sparked.

But the fight over voting laws now extends far beyond Trump and is shifting to Washington, where the Democratic-led Senate will soon consider an array of voting changes. The package, known as H.R. 1, would require states to register eligible voters and offer same-day registration automatically. It would limit states’ ability to purge registered voters from their roles and restore former felons’ voting rights. It would also require states to offer 15 days of early voting and allow no-excuse absentee balloting, among dozens of other provisions. Democrats, who are marshaling their own resources behind the bill, argue it is necessary to block what they describe as voter suppression efforts in the states.

Republicans contend it’s a grab bag of long-sought Democratic goals aimed at tilting elections in their favor. Cruz claimed it would lead to voting by millions of “criminals and illegal aliens.”

He added that he had recently participated in an all-day strategy call with national conservative leaders to coordinate opposition. The leaders agreed that Republicans would seek to rebrand the Democratic-backed bill as the “Corrupt Politicians Act,” he said.

The focus on voting is visible across the conservative movement, even among groups with no clear interest in the voting debate. In February, at a televised town hall, leading Christian conservative Tony Perkins fielded several questions about voting before tackling topics on the social issues his Family Research Council typically focuses on.

Perkins answered the question by recalling how voting laws were made stricter in his native Louisiana after a close 1996 Senate race won by Democrats. He noted that the state now votes solidly Republican.

“When you have free, fair elections, you’re going to have outcomes that are positive,” Perkins said before urging viewers to push state lawmakers to “restore election integrity.”

Stronger voting regulations have long been a conservative goal, driven by old — and some say outdated — conventional wisdom that Republicans thrive in elections with lower turnout and Democrats in ones with more voters. That has translated to GOP efforts to tighten voter identification laws and require more frequent voter roll purges. Both efforts tend to disproportionally exclude Black and Latino voters, groups that lean Democratic.

In a sign of the increasing attention to the issue last year, Leonard Leo, a Trump advisor and one of the strategists behind the conservative focus on the federal judiciary, formed The Honest Elections Project to push for voting restrictions and coordinate GOP effort to monitor the 2020 vote.

But the issue expanded beyond what many conservatives expected. As Trump groundlessly blamed fraud for his loss, and he and his allies lost more than 50 court cases trying to overturn the election, his conservative base became convinced of vague “irregularities” and holes in the voting system.

While Leo’s group, like other parts of the establishment GOP, kept a distance from such claims, state lawmakers stepped in quickly with bills to fix phantom problems and restore confidence in the system.

Leo’s group has since released a list of its preferred voting law changes.

Similarly, other outside groups soon jumped into the debate roiling their activists who write the letters, make phone calls and send the small donations that keep the groups relevant.

“It’s gone up the chain of priority,” said Noah Wall, executive vice president of FreedomWorks, which trained 60 top activists in Orlando last weekend on voting issues. “If you were to poll our activists right now, election integrity is going to be near the top of the list. Twelve months ago, that wasn’t the case.”