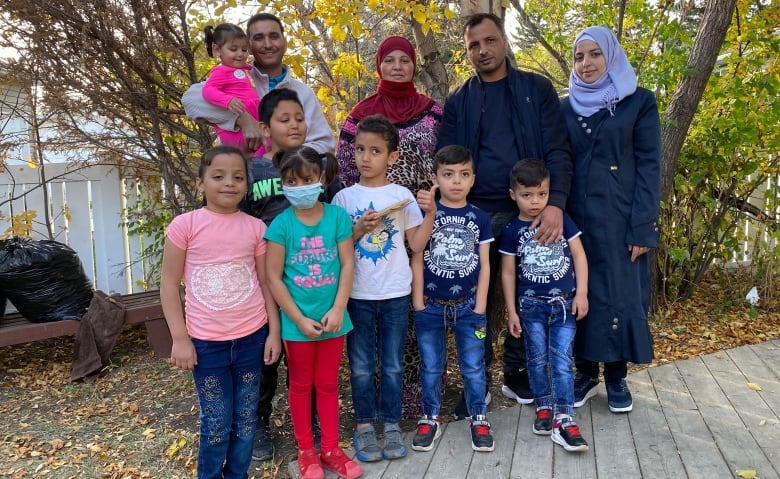 The Al Khalif family is just grateful to finally be in Canada, even if the pandemic delayed their arrival and quashed their much-anticipated airport reunion.

Syrian refugees Mahmoud Al Khalif, his wife Mariam, and their three children waited nearly five years to reunite with his sister in Regina.

Then, just as the family got ready to fly from Lebanon to Canada this past spring, the pandemic shut down the borders and prolonged the separation.

Their brother-in-law, Abdelkarim Al Elaiwy, who has lived in Regina since January 2016, said the delay was hard to take after so much anticipation.

It took another six months, but the family was finally allowed entrance to Canada on September 21.

The long-awaited hugs had to wait a bit longer, however.

The two groups were only able to wave to each other from a distance at Regina International Airport. The refugees arriving from Lebanon had to quarantine for 14 days with no contact with anyone else, as required by a federal public health order.

For 30-year-old Rawda Al Khalif, being unable to hug her brother at the airport was excruciating. She’s missed him, and worried about him, every day since leaving him behind in Lebanon.

The brother and sister and their families have always been very close. They fled the Syrian civil war together in 2011 and then lived in the same house in Lebanon.

In late 2015, Rawda and her family were chosen to move to Canada as government-sponsored refugees. They were excited, and grateful, but torn about leaving their relatives behind.

“Our heart is broken about that,” said Rawda’s husband Al Elaiwy. “I like Canada. Very, very good country…[but] here, we don’t have anyone. No relatives.”

Rawda has found the Canadian winters particularly isolating. But she and her husband couldn’t afford to sponsor her brother and his family on their own.

Then, a chance encounter changed everything. They met a new friend in the park, Regina resident Blair Roberts, and soon a group of Canadian friends and some local churches were teaming up to raise money and fill out forms for a private sponsorship.

“We are so happy. Thank you, thank you,” said Al Elaiwy, who is still amazed by their generosity.

On Thursday, just before the Thanksgiving long weekend, Al Elaiwy hosted his brother-in-law’s family— now out of quarantine — at his bungalow in south Regina.

All 10 of the children ran around in the backyard while the parents drank tea. The families, who will stick together in a bubble, were making plans to celebrate both a birthday and Canadian Thanksgiving over the weekend.

The Al Khalifs are just starting to think about what comes next. They want to take English lessons and send their children to school.

But the newcomers know the pandemic will present more challenges.

The Regina Open Door Society, which helps immigrants and refugees with housing, language, and employment, has moved most of its services online, with limited in-person appointments.

“Some may not even have what they need [to access services], like bandwidth and equipment, but our staff in every department has worked very hard [to help them],” said Getachew Woldeyesus, a settlement worker, adding that everything takes longer these days.

Woldeyesus said far fewer immigrants and refugees have arrived in the city this year, although a few government-sponsored refugee families arrived in September and he expects more in the coming months.

“I don’t think we expect a wave, I think it will still be a trickle,” he said. “Always the refugees are in our mind because they need to be in a safe place like Canada.”

Mahmoud Al Khalif hopes he can eventually sponsor his brother, Abdel Rahman, who was wounded during the recent Beirut explosion. For now, he’ll focus on embracing life in Canada.

The two families still find it surreal to be together again.

He and his wife say their life in Canada will be even better now that they can share it with family.

Rawda reaches over and kisses her brother on the cheek. “My brother,” she said. “Happy.”