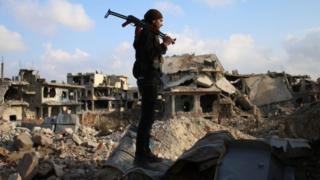 US President Donald Trump has ended the CIA’s clandestine programme to provide weapons and supplies to Syrian rebel groups, officials have said.

The programme began in 2013 as Mr Trump’s predecessor, Barack Obama, decided to put pressure on President Bashar al-Assad to stand down.

The decision to halt it was made almost a month ago, by which time the flow of arms had already slowed significantly.

The officials said the move was part of an effort to improve ties with Russia.

Russia’s military support has helped Mr Assad hold on to power during the six-year civil war that has left more than 300,000 people dead and displaced 11 million others.

The Washington Post newspaper was the first to report the end of the CIA weapons programme on Wednesday night.

Mr Trump made his decision after a meeting in the Oval Office with National Security Adviser H R McMaster and CIA Director Mike Pompeo and before he held talks with Russian President Vladimir Putin at the G20 summit in Germany on 7 July, according to the Post.

Two days after the summit, a truce brokered by the US and Russia took effect in three southern Syrian provinces. But the end of the weapons programme was reportedly not a condition of the negotiations.

US officials told Reuters news agency there had long been doubts about the programme’s effectiveness. Despite a lengthy vetting process, some rebels had defected to so-called Islamic State (IS) and other jihadist groups, they said.

The CIA-backed groups have also been targeted repeatedly by Russian air strikes, which began in September 2015.

One official said Mr Trump’s decision was not a major concession to Russia given Mr Assad’s grip on power, adding: “It’s a signal to Putin that the administration wants to improve ties.”

But another called the decision “momentous”, telling the Post: “Putin won in Syria.”

A separate US military programme to train, arm and provide air support to an alliance of Kurdish and Arab fighters battling so-called Islamic State will continue.

The White House and the CIA declined to comment on the reports.

Mr Trump had suggested before he took office in January that he might end support for the rebels and prioritise the fight against IS in eastern and northern Syria.

In late March, the White House said it had abandoned the goal of forcing Mr Assad to stand aside, explaining that “there is a political reality that we have to accept”.

But the next month, after the US accused the Syrian government of a deadly chemical weapons attack on a rebel-held town, Mr Trump ordered a cruise missile strike on a Syrian air base and his secretary of state said Mr Assad’s actions suggested “there would be no role for him to govern the Syrian people”.

Mr Trump’s decision to agree to the Russian demand to end the weapons programme comes as he faces intense scrutiny by Congress and a special counsel investigating alleged Russian interference in the 2016 US presidential election.