Swallows in B.C. town destroyed in their nesting boxes as vandalism escalates 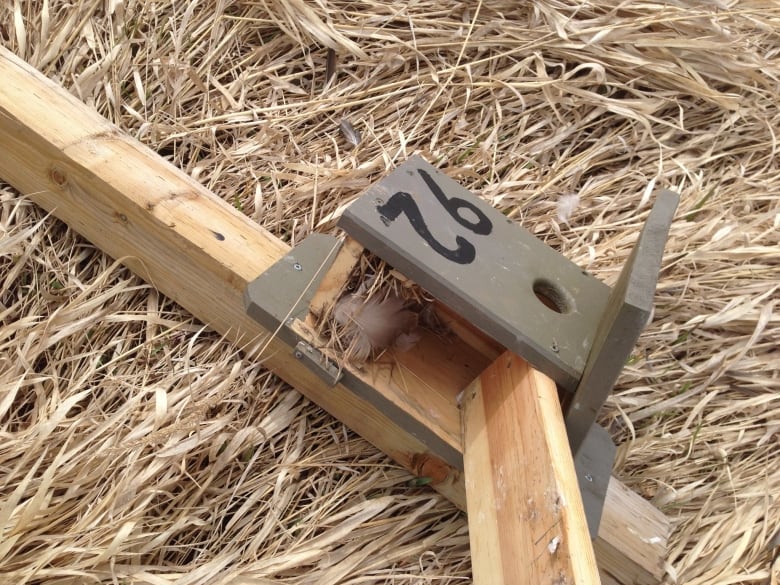 A B.C. wildlife biologist says she has occasionally seen acts of violence against wildlife in her 30-year career, but says nothing can compare to the recent incidents perpetrated against dozens of nesting swallows.

The vandalism started at the end of April after someone uprooted and smashed several nesting boxes along the waterfront in Salmon Arm, B.C., during the birds’ crucial nesting and mating cycle.

But last Friday, the vandalism took a more violent turn, according to Dianne Wittner, who is also a member of the Shuswap Naturalist Club.

“[The person has] gone from removing partially built nests to smashing eggs,” she said, noting that it was discovered Friday morning that a female swallow that was incubating her eggs had been bludgeoned.

Since the vandalism began, 32 nesting boxes have been damaged or destroyed along with untold numbers of eggs.

Wittner says the incidents began after dogs were banned from a nearby hiking trail located beside the nesting area, which is on land managed by the Nature Trust of B.C.

“This is a level of anger that is beyond the norm,” Wittner said.

The community got together to build and set up bird boxes along the shores of Shuswap Lake three years ago.

The naturalist club has since maintained the boxes and uses them to collect data on the birds.

Barn swallows are listed as an endangered species in Canada and are protected under the Migratory Species Act.

Six species of swallows inhabit Salmon Arm from early April until late September, when they head to the southern U.S. or as far south as Argentina.

Members of the club took care of the needed repairs after the first eight boxes were damaged but repairs have since become a full-time job for Wittner.

RCMP confirmed Monday night they are investigating and noted in a statement that Environment Canada has also been contacted. The naturalist club has installed hidden cameras in the area and put the word out to neighbours to be on the lookout for suspicious activity.

“There needs to be justice. This [person] needs to get caught,” Wittner said.