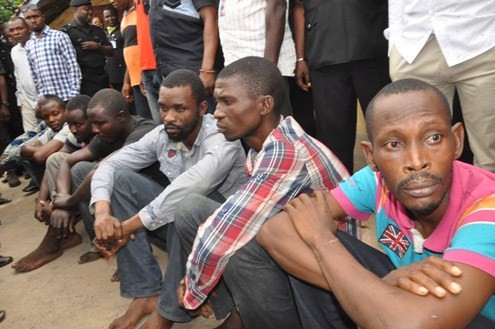 Two men — Johnson Oyama and Mukaila Abudu — who allegedly robbed with a toy gun, were on Friday granted a reprieve on the orders of an Ikeja Chief Magistrates’ Court.

The Chief Magistrate, Mrs O.A. Layinka, granted the accused bail in the sum of N50,000 each with two sureties each in like sum.

Layinka said one of the sureties must either be a blood relation or a community leader and should also provide evidence of two
years tax payment to the Lagos State Government.

The accused — Oyama, 28, and Abudu, 38 — are facing a two-count of unlawful possession of a toy gun with intent to commit robbery and stealing.

The accused, who are residents of Agege, a Lagos suburb, have pleaded not guilty to the charge.

The prosecutor, Sgt. Donjor Perezi, had told the court that the accused committed the offences with others still at large at 10.30 p.m. on April 4 at Mangoro on Lagos-Abeokuta Expressway.

Petezi alleged that the duo stole a bag containing some personal effects, the property of the complainant, Mr Victor Augustine.

“The accused were apprehended by passers-by and a plastic toy gun and a knife were found on them.

“The complainant was accosted while returning from work by the accused, who threatened him with the toy gun and dispossessed him of his bag.

“Augustine raised an alarm and the accused were eventually arrested, while the other accomplice escaped,” he said.

The offences contravened Sections 285 and 310 of the Criminal Law of Lagos State, 2015.

The case was adjourned until June 8 for mention.