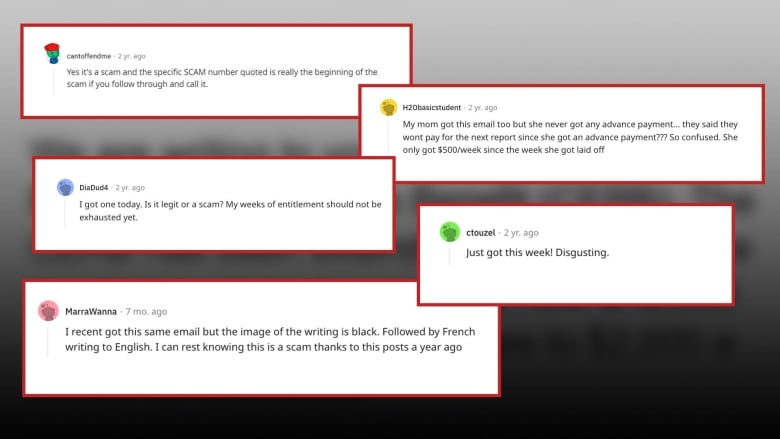 Recipients noticed what seemed like red flags as soon as they opened the emails from Service Canada, demanding repayment of pandemic benefits.

The government logo looked strange, or was broken. The text was grey, instead of the black typically used in official government correspondence. Some were written in French first, followed by English, which to many seemed unusual.

“You were paid more benefits than the amount for first you were eligible,” said one such email, seen by CBC News.

Some immediately dismissed it as another scam by fraudsters purporting to be from a government agency.

Others discussed the emails online, recounting attempts to get straight answers from Service Canada. One recipient claimed an agent hung up on them when they called to ask.

On Twitter and Reddit, they said the formatting looked vastly different from government correspondence they’d received in the past. One wrote that the government logo looked “horrible,” as if it had been made with the no-frills app MS Paint.

Others thought it was suspicious to be contacted via email, rather than a secure message.

More than 100 people reported the emails to the national fraud watchdog.

But Service Canada says the emails are no hoax, and those who receive them really do have to pay up.

The agency uses the email address in question — EI-AE.ServiceCanada@canada.gc.ca — to contact people about employment insurance and emergency benefits. It has sent 26.2 million emails about the $2,000-per-month Canada Emergency Response Benefit (CERB), which the government launched in March 2020 for workers who were laid off or had their hours cut significantly during lockdowns.

It’s not clear how many variations of the repayment letter have gone out.

Some emails seen by CBC News say recipients must repay a portion of their CERB, but don’t state how much.

Recipients are told to call a 1-800 number or click a link to share information “that could modify our decision and impact the amount you owe” within 30 days. After that, the email says, they will receive a letter in the mail detailing their debt and how to repay it.

Service Canada says 1.7 million Canadians have been or will be contacted about debts related to the $2,000 advance payments they received after applying for CERB, because they wound up being ineligible for the full amount.

The Canadian Anti-Fraud Centre says it has received 166 reports about the emails since March 2020, which a spokesperson attributed to “large number of scams circulating, and [because] in some cases, it is difficult to know if the email is legitimate or not.”

One expert says Canadians should be extra vigilant about any emails that demand a payment, given how many sophisticated scams are operating in Canada, including multiple scams relating to CERB repayments and Service Canada.

“I think individuals, given just how easy it is for them to be victimized, and all the steps that they have to go through [if their accounts are compromised] are overly cautious in some cases,” said Ritesh Kotak, a cybersecurity expert in Toronto.

“Anyone can spoof an email [address] — it looks like it’s from a particular individual but it’s not, and it’s relatively simple to do. And hackers and fraudsters know this.”

Kotak says Service Canada should reconsider whether email is the best way to contact people about repayments, when it could send secure messages or letters by mail instead.

“Clearly there are ways that the government can communicate in secure methods, and they should leverage that.”

In a statement, a Service Canada spokesperson said the content and format of its emails were informed by privacy, legal and communications experts, and were in line with government policies. The emails sent with French before English originated from its Quebec offices, the agency said.

Asked whether the agency would consider making changes to avoid such confusion, a spokesperson said: “We continuously review client feedback about all of our communications, and this feedback informs the way we exchange information with clients.”