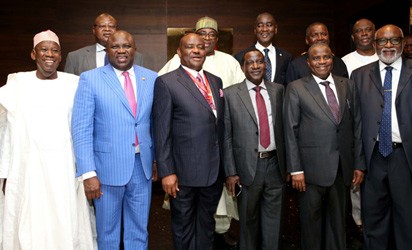 By Dayo Benson & Monsur Olowoopejo
Lagos — As Nigerians seek consensus on the need to restructure the polity amid growing agitations on the issue, Lagos State Governor Akinwunmi Ambode, has challenged the Nigerian Bar Association, NBA, to lend its voice to calls for devolution of powers to states, even as Vice President Prof Yemi Osinbajo, and NBA President Abubakar Mahmoud SAN, emphasized on strong institutions as panacea for the nation’s economic recovery. They spoke in Lagos at the opening ceremony of the NBA 57th Annual Conference with the theme: African Business: Penetrating through Institution Building, which kicked off Sunday night at Lekki, with Chief Justice of Nigeria, CJN, Justice Walter Onnoghen, seven state governors, Judges, past NBA Presidents, Senior Advocates of Nigeria, and Oba of Lagos, Oba RilwanAkiolu, in attendance. Minister of Power, Works and Housing Babatunde Fashola represented the Vice President, while Attorney General of the Federation and Minister of Justice Abubakar Malami SAN, spoke through Dayo Akasa.

Governor Ambode in his key note address at the event, said: “I urge the Nigeria Bar Association to lend its voice to devolution of power to states as the only meaningful form of restructuring the country.”

He also agreed with Osinbajo and NBA President on the need for the nation to have strong institutions as the solution to its economic recovery and growth.

In his opening remarks, NBA President, Abubakar Mahmoud, acknowledged the efforts of the Lagos State Government at building strong institutions, saying that the state had made greatest institutional transformation in recent times.

He said the decision to host the conference in Lagos again was not just because of the facilities and infrastructure but also to support the transformative journey which the State had witnessed.

Former Georgia Prime Minister, Nika Gilawi and other 1,040 experts across the world, including major stake holders in Justice administration, are expected to chart a road map for the recovery of Nigeria’s ailing economy at the conference.

While Gilawi will speak on Roadmap for Nigeria’s Economic Recovery, Vice President Osinbajo will enlighten participants on:  The Role of Government in Creating Institutions to Foster Investment.