Highlights of the Euro U21 Championship match between Serbia and Spain.

Denis Suarez’s first-half strike secured a 1-0 win for Spain over 10-man Serbia at the European U21 Championship on Friday.

Having reached the semi-finals with a group game to spare, Spain coach Albert Celades changed his entire starting XI from the 3-1 win over Portugal on Tuesday.

Barcelona midfielder Suarez captained the side and scored the winner after 38 minutes, capping a fine Spanish move with a first-time finish.

Spain coach Albert Cedales made 11 changes from the 3-1 win over Portugal, resting his star names ahead of the knockout stage. Marco Asensio, Sandro Ramirez and Hector Bellerin were all unused substitues.

Serbia were reduced to 10 men two minutes later when their skipper Uros Djurdjevic picked up a second yellow card for an elbow on Mikel Merino.

The victory preserves Spain’s perfect record at the tournament and they join England in the knockout stage.

The Spanish second string picked up from where their team-mates left off last Tuesday, dominating the first half and taking the lead through Suarez.

He hammered home after a flowing move involving Inaki Williams and Alvaro Odriozola.

They had opportunities to extend their advantage, with Carlos Soler missing a gilt-edged chance two minutes later.

A second goal would have been a fair reflection of Spain’s first-half control but Serbia actually had the better of the early play and Milos Veljkovic squandered a golden opening after just four minutes, miscuing over from two yards.

But their tough task became that much harder just before the break when captain Djurdjevic received a second yellow card after catching Merino.

One goal down and with a man disadvantage, Serbia battled bravely in the second half but could not find an equaliser.

They went closest when Spain goalkeeper Pau Lopez – who spent last season on loan at Tottenham – tipped over a stinging effort from Andrija Zivkovic.

But their margin of defeat would have been greater but for the performance of their ‘keeper Filip Manojlovic, who made smart saves from Suarez and Inaki Williams and one remarkable point-blank stop from Borja Mayoral.

Man of the match – Denis Suarez

The Barcelona midfielder was exceptional as the creative centre in Spain’s possession-based system.

They enjoyed the majority of the ball – especially when Serbia were reduced to 10 men – and the extra space allowed Suarez to shine.

He scored the winning goal with a lovely finish and could have had two or three more but for the brilliance of Serbia goalkeeper Manojlovic. 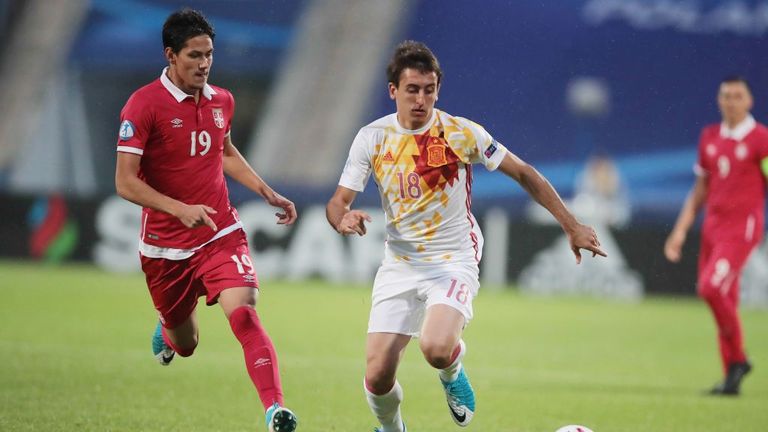 Spain have reached the semi-finals of the competition

Spain await confirmation of their semi-final opponent, with the match scheduled for June 27. Serbia, Macedonia and Portugal are all eliminated from Group B.