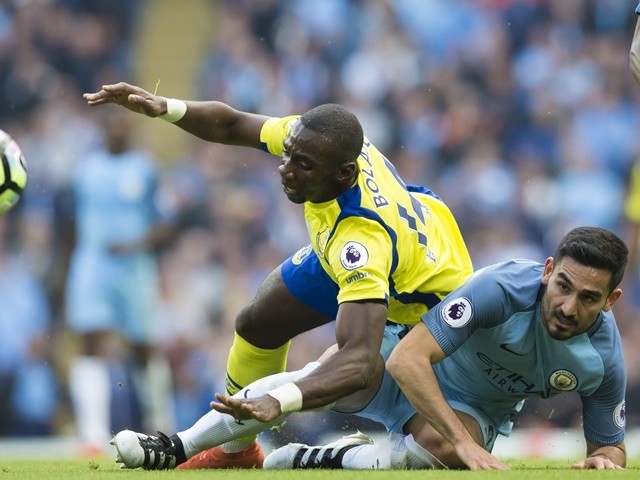 City were left with an uphill battle after Rooney’s strike was followed by Kyle Walker’s dismissal after two quick bookings just 44 minutes into his home debut.

But Pep Guardiola’s side showed belief and spirit to avoid only their second home defeat under the Spaniard.

Rooney, 31, looked to have given Everton victory after he slid Dominic Calvert-Lewin’s square pass between City keeper Ederson’s legs from eight yards.

And the Toffees’ cause was helped when England full-back Walker slid in late on Leighton Baines and was then booked again, rather harshly, for catching Calvert-Lewin in the face as they competed for a high ball.

Despite their numerical disadvantage, the home side continued to press after the break and were rewarded when Sterling fired in Mason Holgate’s weak defensive header.

Rooney became only the second player to score 200 Premier League goals – after former Blackburn and Newcastle striker Alan Shearer – when he put the visitors ahead after 35 minutes.

The former Manchester United forward cupped his ears in front of the home fans as he celebrated his second goal in two league matches since rejoining Everton.

Perhaps it was no surprise Rooney netted the landmark goal at Etihad Stadium, having also scored his 50th and 150th Premier League goals against United’s neighbours City.

However, the ease with which City’s new £35m keeper Ederson allowed his first-time shot in was more of a surprise.

“It is a good contact from Rooney, but you have to say it went straight at Ederson,” said former Toffees defender Phil Neville on BBC Radio 5 live. “You have to expect your keeper to save it.”

Rooney, who scored his first top-flight goal as a 16-year-old for the Toffees against Arsenal in October 2002, hit the double century in his 462nd league match in front of his former Red Devils managers Sir Alex Ferguson and Jose Mourinho.

Ultimately, the England international did not prove to be the match-winner like he was against Stoke last weekend – but he was still smiling at the final whistle as the early part of his Everton return continues to be fruitful.

“It was nice with my history with Manchester United – and to do it in such an important game for us and so early in the season, it was a sweet moment,” said Rooney.

“I’m sure the red half of Manchester will have enjoyed it as well.”

City manager Guardiola was all smiles as he walked onto the pitch arm-in-arm with Rooney at the full-time whistle – but his demeanour quickly changed as he approached referee Bobby Madley and his assistants.

Madley was the focus of City’s ire after giving a questionable second yellow card to Walker, who appeared to back into Calvert-Lewin with his shoulder rather than raise an elbow – and boos from the home supporters accompanied his walk back to the tunnel.

Guardiola remonstrated with fourth official Michael Oliver on the touchline as Walker walked off, then appeared to sarcastically clap Madley at the end after shaking his hand.

He refused to discuss Walker’s red card when asked about it in a post-match television interview. “Next question,” he said.

It is not the first time questions about refereeing decisions have led to spiky exchanges between Guardiola and reporters.

The former Barcelona and Bayern Munich boss raised concerns about English referees last season, saying they “conduct games differently” from those in Spain and Germany.

However, Sterling offered more of an insight into the feelings inside the City camp afterwards.

“We felt decisions like those cost us a lot of points last season,” the England winger said. “I didn’t see it as a second booking and I thought it was unfair.”

Manchester City, after finishing 15 points behind champions Chelsea in third place, have spent £215m on new players this summer as they look to win the Premier League title for the first time since 2014.

Everton have been the other big spenders, shelling out £140m themselves in order to try to break into the top four.

The vast amount of money spent by both clubs set up an intriguing early-season encounter, but the key thread of the game remained the same as last season – Everton came to frustrate City; City struggled to break them down.

This was a common theme in Guardiola’s first season at the helm, as away teams arrived at the Etihad content to defend and leave with a point.

While only losing once in front of their own fans, City racked up seven draws and their 41 points earned was only the sixth best home record in the top flight.

All was going smoothly at the start of Guardiola’s reign – until Everton turned up in October.

City had 19 shots and 72% possession as the stubborn Toffees left with a 1-1 draw last season, providing a blueprint of how to frustrate the hosts which was subsequently successfully followed by Southampton, Middlesbrough and Stoke.

Everton tried to implement the same tactic. For 82 minutes, they largely managed to do that as City were restricted to just David Silva’s first-half shot against the post and a wild strike over the bar by Sterling.

Eventually City’s pressure told as a poor header by young full-back Holgate – who otherwise had an excellent game on the right flank – fell for Sterling to convert from 12 yards.

Not a happy 200th for Walker – the stats

Manchester City, who won at Brighton on the opening weekend, go to Bournemouth on Saturday (12:30 BST) looking for their second win of the season on the south coast.

Everton switch their attention to the Europa League, going to Hajduk Split on Thursday with a 2-0 first-leg advantage as they aim to reach the group stage.

The Toffees return to Premier League action with a trip to champions Chelsea on Sunday (13:30 BST).