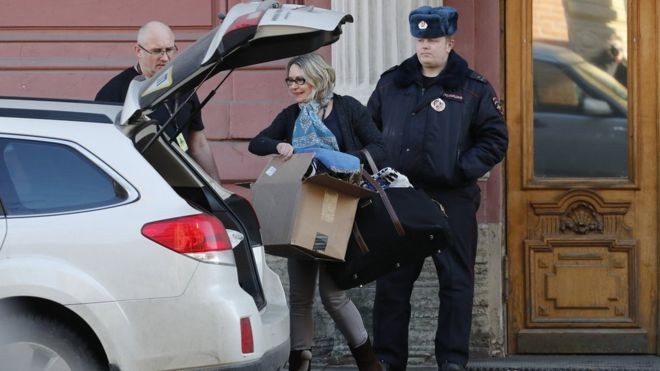 Russia has announced further measures against UK diplomats while at the same time declaring tit-for-tat expulsions of officials from 23 other countries.

It has told the British ambassador to cut staffing to the size of the Russian mission in the UK.

Moscow has rejected UK accusations that it is behind the nerve agent attack on an ex-spy and his daughter in the UK.

However, some 150 Russians have since been expelled by mainly Western countries.

Russia initially hit back at the UK, but then announced 60 US expulsions. On Friday it called in a string of foreign ambassadors with news that their own countries’ measures were being matched.

Sergei Skripal and his daughter Yulia collapsed in Salisbury, England, on 4 March. Mr Skripal remains in a critical but stable condition. Yulia’s condition is said to be improving.

UN Secretary General Antonio Guterres on Thursday issued a warning over “a situation that is similar, to a large extent, to what we lived during the Cold War”.

In another development, Russia accused British customs officers of trying to search an Aeroflot airliner arriving from Moscow at London’s Heathrow airport without allowing the crew to be present.

British diplomats left Moscow a week ago, but ambassador Laurie Bristow was summoned back to the foreign ministry for additional punishment.

It’s not immediately obvious what it means in practice, but it’s clear that Russia sees Britain as the ringleader of an international conspiracy which resulted in the biggest mass expulsion of Russian diplomats in history.

Britain’s “provocative and unjustified actions”, the ministry said, had “inspired the unfounded expulsion of Russian diplomats”.

It’s a backhanded compliment to Prime Minister Theresa May, who has successfully corralled a wider international coalition than anyone would have thought possible a month ago.

Russia has railed against the British government over its efforts to internationalise what officials here call “the so-called Skripal affair”. The solidarity expressed by so many countries has been dismissed as a result of financial and political pressure, orchestrated in tandem with the US.

Which other countries are involved?

Twenty-nine countries have expelled 145 Russian officials in solidarity with the UK – and Nato has also ordered 10 Russians out of its mission in Belgium.

The US expelled the largest single number – 60 diplomats – and closed the Russian consulate general in Seattle.

Russia reciprocated on Thursday declaring 58 US diplomats in Moscow and two in the city of Yekaterinburg to be “personae non gratae”. It also announced the closure of the US consulate in St Petersburg.

The US said it had been expecting the move and warned it may take further action.

A statement by the Russian foreign ministry also said that Russia “reserves the right to take retaliatory measures” against Belgium, Hungary, Georgia and Montenegro – countries that had joined the co-ordinated action against Russia “at the last moment”.

What is Russia’s argument?

Russian Foreign Minister Sergei Lavrov has blamed “harsh pressure from the United States and Britain under the pretext of the so-called Skripal case”.

He reiterated Russian calls for consular access to Yulia Skripal – a Russian citizen.

Russia, he said, was also seeking a meeting with leaders of the Organisation for the Prohibition of Chemical Weapons (OPCW) to “establish the truth”.

On Friday, in addition to the new Western expulsions, UK Ambassador Laurie Bristow was handed a protest note that said Britain’s “provocative actions” had led to the decision by other governments to expel Russians.