Special avalanche warning issued for much of the Canadian Rockies 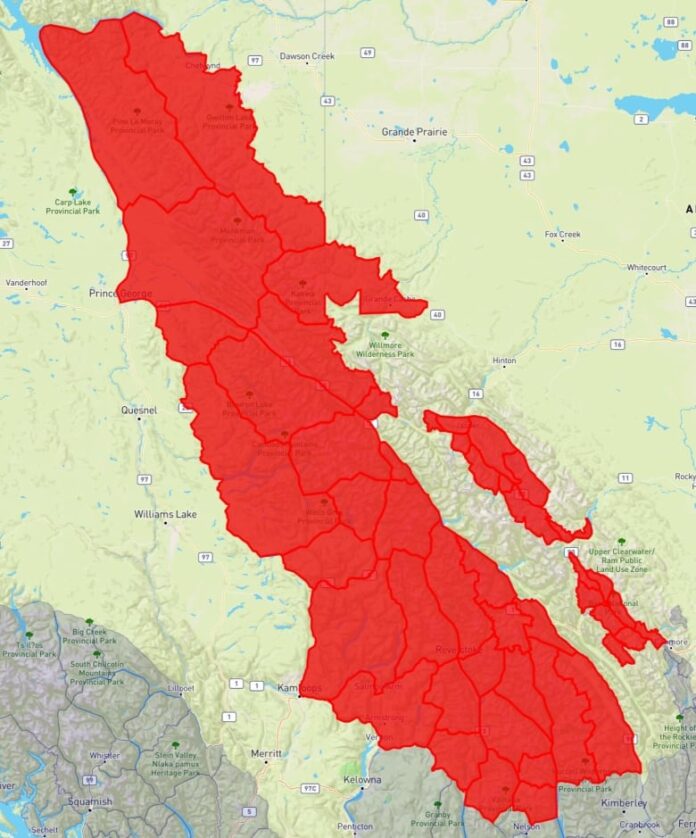 Avalanche Canada has issued a special avalanche warning (SPAW) for much of the Canadian Rockies.

Recent snowfall and warming temperatures have followed a cold and dry start to winter creating an unstable snowpack that could lead to natural and human-triggered avalanches.

The avalanche forecast is rated considerable or high for much of the B.C. interior and Alberta Rockies. Avalanche Canada is warning there is potential for large natural and/or human triggered avalanches throughout the area.

“So that’s why we’ve extended our special warning up until Monday so we can track conditions over the next few days.”

With the likelihood of increased traffic headed into the backcountry over the new year’s holiday, Horton says the current conditions need to be taken into account when planning a trip.

That could include avoiding avalanche terrain altogether or postponing a trip until conditions improve. If backcountry users go equipped with proper training and equipment, Horton says, cautious decisions must be taken during the coming days.

“When it’s more dangerous, like it is right now, that generally means more conservative routes, lower slope angles, densely forested trees, staying away from our avalanche prone areas,” he said.

Banff National Park officials echo the sentiment that uses must remain vigilant, as they have seen an increase in reported avalanches within the park.

“Since we got some more snow around Christmas we’ve been seeing almost on a daily basis, human-triggered avalanches, a lot of close calls, and also a lot of people who’ve been involved in them,” said Alex Lawson, a visitor safety technician with Parks Canada in Banff.

So far this season, park officials have only had to respond to one avalanche where some gear was missing but near misses involving people have been on the rise, Lawson said.

The avalanche problem exists pretty much everywhere in Banff National Park, Lawson said, with a slab over top of a weak layer and triggering avalanches 20 or even 30 metres away from where someone is standing.

“You could be walking on relatively mellow terrain that you wouldn’t really consider it to be avalanche terrain, but the weight and impact that you’re putting on the snowpack there has been triggered avalanches elsewhere,” he said.

Hikers and cross country skiers on flatter terrain could end up downhill from slide areas without knowing it, he said, and park users need to pay attention to signage pertaining to avalanche danger even if they aren’t planning to head up in the hills.

“We’re going to be dealing with some challenging knowledge conditions for for the foreseeable future,” Lawson said.

Horton said it is important to check the avalanche forecast and conditions before heading out and taking the proper gear.

Taking Avalanche Canada’s Avalanche Safety Training courses offered by various outdoor educators will also help users learn how to interpret forecasts and pick routes that are appropriate for the conditions.

“There’s an important distinction between terrain that’s controlled for avalanches and only by other professionals, and the backcountry, where most people go to recreate snowmobile or backcountry ski,” Horton said.

“In these areas, it’s really up to the individual to take their decision making into their own hands and make safe decisions because there is no professional advance control in the background.”