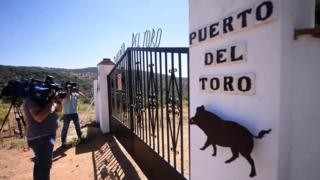 A leading banker has been found shot in the chest, six months after he was given a jail term for a corruption scandal that stunned Spain.

Miguel Blesa, 69, is thought to have shot himself at a country estate in the southern province of Córdoba.

Blesa was for 13 years the chairman of the Caja Madrid savings bank.

He was found guilty over secret “black credit cards” handed out to bank board members and advisers, who used them to buy luxury goods and entertainment.

Miguel Blesa was given a six-year sentence but died before his appeal could be heard.

Having arrived at the Puerto del Toro estate at Villanueva del Rey in the early hours of Wednesday, he had been having breakfast with a friend when Blesa said he had to move his car. Moments later a shot rang out and his body was found.

Spanish authorities were investigating a possible suicide but had not ruled out the theory of an accident, sources said. Blesa was a passionate hunter and had a gun licence.

For a Spain reeling from an economic crisis exacerbated by a €51bn (£45bn; $58bn) state bailout of the banks, the credit card revelations that emerged in 2013 were toxic.

Caja Madrid and Bankia, the bank it became in 2010 when merged with five other savings banks, were both implicated in the scandal that ran from 1999 to 2012. The Bankia bailout cost more than €20bn. Much of the money will never be recovered.

An estimated €15.5m, supposedly meant to cover the costs of attending board meetings, had been spent with the unofficial credit cards on jewellery, holidays and luxury clothes or just taken out of cash machines.

Blesa was found guilty of misappropriating €436,700 of funds. Pictures emerged of the former chairman on hunting trips, showing off his spoils including a dead hippopotamus.

The case ensnared more than 60 bank executives and ex-board members. Among them was Rodrigo Rato, the illustrious ex-head of the International Monetary Fund, who was handed four and a half years in jail.

The case also seeped into Spanish politics as Rodrigo Rato had been a high-profile economy minister in the centre-right Popular Party government before he joined the IMF. He became chairman of Bankia in 2010 two years before it had to be bailed out.

Miguel Blesa was not just fighting an appeal, he was also caught up in other cases: