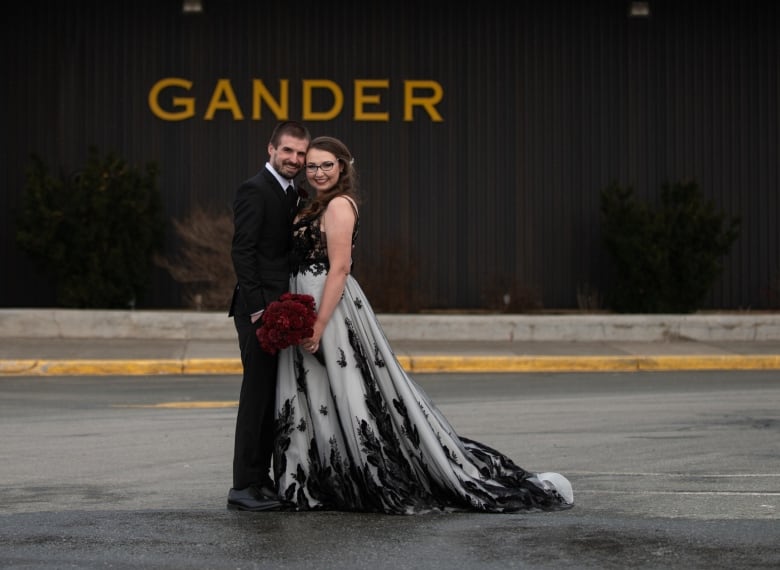 A South Carolina couple left the warm weather of home to elope in Gander, the place they fell in love with after watching a performance of Come From Away.

In 2019, Bronwyn Frank and Jason Harrell went on their first formal date to see the musical in Greenville, S.C. Bronwyn, who has worked in theatre since high school, has seen her fair share of musicals, but this was Jason’s first time going to a live theatre production.

The couple from Greer, S.C., say they immediately fell in love with the people and places portrayed in the musical — which depicts what happened in Gander, where dozens of flights were grounded in the immediate aftermath of 9/11 — making the town the ideal place to tie the knot.

“Gander is a really special place to us because that was the first theatre show we saw together,” Bronwyn told CBC News. “Getting married somewhere that was based on a show is just incredible.”

The Harrells had their wedding in the international lounge at Gander International Airport on April 8.

When looking for a venue in Gander, Bronwyn says she contacted the airport directly, and president and CEO Reg Wright welcomed the couple’s idea.

“[He] responded to my email within 24 hours and was like, ‘You know, this is not the season to come up here and get married, but we would love to have you,'” said Bronwyn.

Along with their unique venue, the Harrells also strayed from some conventional wedding traditions.

Since she couldn’t travel with real flowers, Bronwyn carried a bouquet of wooden ones. She also opted for a black and white dress, which had 1,440 crystals glued on to it by a friend.

During the wedding, the couple was also “screeched in” by Beulah Cooper, Oz Fudge and Brian Mosher — three people who inspired characters in Come From Away.

“That was incredible. More than we bargained for, but incredible,” said Jason. “I couldn’t have even thought that it would be as cool as it was.”

They hope to come back to Newfoundland soon to explore more of the island.

“I honestly cried the night before we left,” said Bronwyn. “I was not ready to leave Newfoundland.”