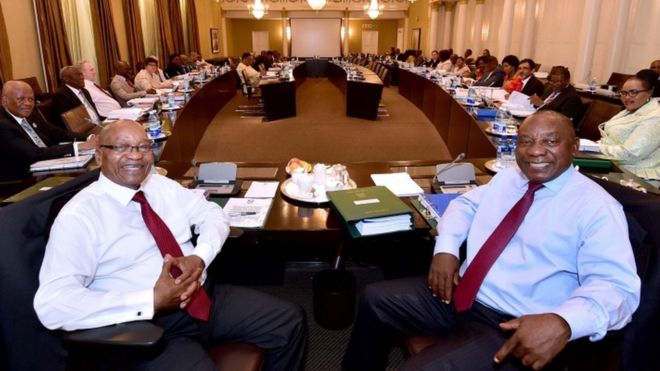 Mr Ramaphosa, who heads South Africa’s governing party, said both he and Mr Zuma understood the need for a speedy resolution.

He said the pair aim to conclude talks on the president’s future within days.

It is being seen as the first confirmation that Mr Zuma will step down shortly.

The 75-year-old president is facing extensive corruption charges after a turbulent nine years in power.

He has faced increasing pressure to quit since December, when Mr Ramaphosa replaced him as leader of the ruling African National Congress (ANC).

Mr Ramaphosa said direct talks were an opportunity to reach an agreement without spreading discord or division.

The ANC said they had been “fruitful and constructive discussions”.

An urgent Wednesday evening meeting of the party’s top leadership – which has the power to unseat Mr Zuma – has been pushed back to 17 February.

Opposition parties are demanding a vote of no-confidence to remove the president.

The Nelson Mandela Foundation has also urged him to step down.

South Africa had seen “systematic looting” under Mr Zuma’s rule, and he “must go sooner rather than later”, it said in a statement.

How has parliament reacted?

The address is always made by the sitting president, and is the political event of the year in South Africa.

Parliament cancelled it out of concern over “calls for disruption”, according to Speaker of the National Assembly Baleka Mbete.

Mr Zuma’s office said in a statement that “the president has requested the postponement due to certain developments”.

They’ve started calling it “Zexit” here – the long, fractious process of nudging President Jacob Zuma out of his job.

Quite why it is proving so difficult is still not entirely clear.

The man poised to replace him, Cyril Ramphosa, said only that they had been busy discussing “pertinent matters”.

The best guess here is that Mr Zuma, who is facing multiple corruption charges, may be looking for some sort of legal guarantees – although an amnesty is not an option in South Africa.

Mr Ramaphosa – already sounding like the country’s new president – said both he and Mr Zuma were aware of people’s anxieties, and the need for a speedy resolution in the “coming days”.

He made it sound as if “Zexit” was now inevitable.

South Africa’s elections are scheduled for 2019 and Mr Zuma cannot run again as there is a two-term limit.

Many in the ANC want him gone as soon as possible so they can rebuild the party’s standing. Mr Ramaphosa has associated himself with an anti-corruption drive.

In the 2016 local elections, the ANC lost ground to opposition groups, Democratic Alliance and the Economic Freedom Fighters.

Why is there a push to remove him?

Mr Zuma’s presidency has been overshadowed by allegations of corruption.

In recent years his links to the wealthy India-born Gupta family, who are alleged to have influenced the government through their relationship with Mr Zuma, have caused his popularity to plummet. In South Africa, it has become known as “state capture”.

Both Mr Zuma and the Guptas deny the allegations.

Then there is also the country’s struggling economy, with the unemployment rate rising to about 28%.

In brief: The allegations against Zuma