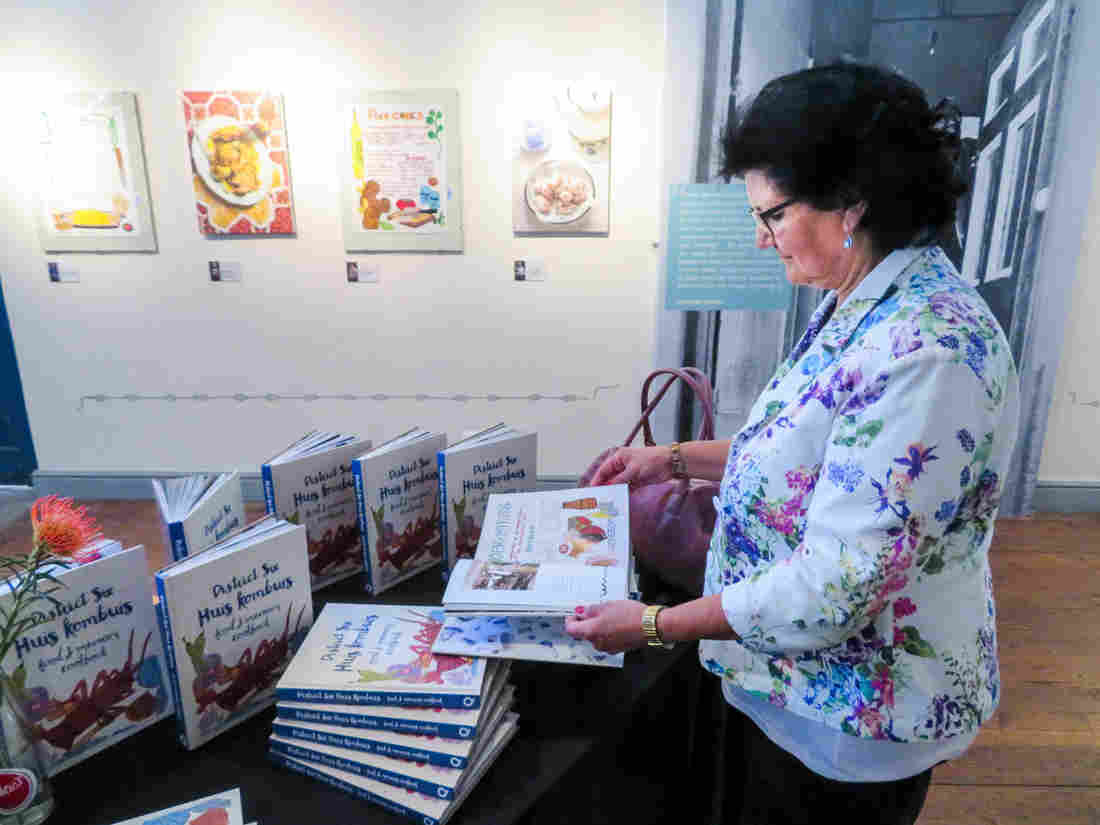 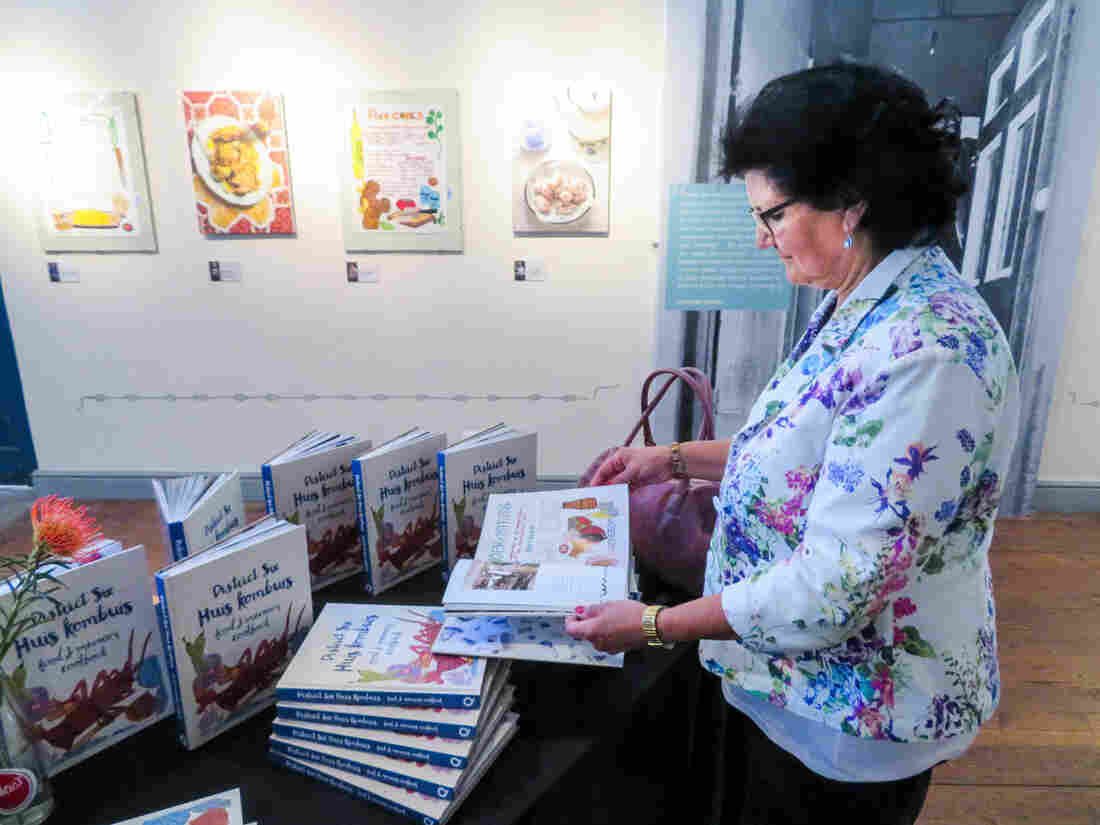 Linda Fortune’s family was forced out of District Six when she was 22. Growing up, the family often ate crayfish her father caught as a hobby. “If you had an overabundance of fish, you would share it with the neighbors,” she recalls. Alan Greenblatt/NPR hide caption

Linda Fortune’s family was forced out of District Six when she was 22. Growing up, the family often ate crayfish her father caught as a hobby. “If you had an overabundance of fish, you would share it with the neighbors,” she recalls.

You can tell a lot about a culture by its food, particularly if food is all that remains.

District Six was a mixed-race section of Cape Town, South Africa, that was home to Europeans, Asians, Africans, Christians, Muslims and Jews.

A half-century ago, District Six, which was just outside of downtown, was declared a whites-only area. By the early 1980s, 60,000 people had been forcibly removed from their homes.

To commemorate the anniversary of the order and as part of its ongoing work to preserve the culture of the lost community, the District Six Museum in Cape Town has released District Six Huis Kombuis: Food and Memory Cookbook.

Huis kombuis means “home kitchen” in Afrikaans. The book presents recipes from about two-dozen former District Six residents, remembering and recreating the food they ate as children. “This is not a cookbook in the sense of recipes of the greatest chefs,” says Tina Smith, head of exhibitions at the museum and the book’s lead author. “This is ordinary stuff and how people put it together.”

District Six was far from the only area in South Africa that experienced ethnic cleansing during the apartheid years. Perhaps because of its central location, it has been better documented than most. Last year, a musical commemorating the area called District Six — Kanala enjoyed two successful runs in Cape Town. (The area was originally called Kanaladorp, enshrining in its name the idea of a community “helping each other,” which is what kanala means.)

The cookbook grew out of an ongoing project at the museum to bring former district residents together. A core group of about a dozen women meets regularly to share stories and do crafts such as embroidery. “It’s always like yesterday when we speak of what we did in childhood and what we ate,” says Patience Watlington, a former District Six resident. “We decided we were going to start cooking our recipes.”

Their recipes — and stories — were collected over the course of several years, along with others offered by about a dozen other former residents, including a few men. Many of the recipes in the book are reprints of embroidered cloths stitched by contributors. The book is illustrated with photographs of all the contributors, each one holding a street sign or household keepsake. There are also historic photos showing District Six as it was: boys playing cricket in the street, girls skipping rope, food vendors pushing carts.

The book offers narrative memoirs from all the contributors, who talk about cooking food slowly on stoves heated by coal, wood or paraffin. Many of the recipes are simple, with three to five ingredients that can be put together in a few simple steps.

This was definitely not a fast-food culture. Many houses lacked electricity. Nomvuyo Ngcelwane’s family would take jelly to a neighbor’s house to use their refrigerator “for a small fee.” Annie Bam, another contributor, recalls taking her mother’s kneaded dough to Johnson’s bakery to be baked.

Because there often wasn’t a way to store food, everyone seems to remember the names of the specific bakers and grocers where they went to shop daily, often “on tick,” or credit, with the bill generally being paid on Fridays.

There was a lot of food to be made. Many of the contributors recall growing up in cramped conditions in small apartments. Some describe living as many as 10 to a room, screaming for space alongside extended or multiple families. “My parents were both economical and creative because they knew there was a mouth waiting for every crumb that they had,” recalls Ruth Jeftha, the third eldest of 11 children who lived in a communal house with three other families.

One chapter of the book is called “Stretching the Pot,” with tips on how to make dishes go farther with beans or potatoes or other starches, or with lang sous, literally meaning long sauce — giving a dish more volume with liquid. Another chapter is called “Nothing Went Wasted,” referring to the creative uses of bones and inner organs. “If the butcher did not clean it, the dirty tripe was free,” Doreen Hanning remembers.

Some of the recipes presented in the book will not be to mainstream American tastes. Perhaps not many people in the U.S. make lung stew or sheep tongue and pumpkin mash.

But the book reflects the melting-pot nature of the old District Six, mixing and matching dishes from Africa, India and what is called Cape Malay, the South African community descended from former slaves originally from the East Indies. Passed down is a recipe from Janap Masoet’s grandmother for mutton curry, flavored with cumin, coriander, cinnamon and heated up with green chili. Anastacia Schouw offers a tangy treatment of bobotie, a kind of meatloaf that is a staple in South Africa.

Chicken, various contributors assert, was a luxury reserved for special occasions — either on weekends or during annual holidays, depending on a family’s level of income.

But if the book reflects a culture of scrimping, it’s also suffused with the spirit of helpmekaar, an Afrikaans term for helping each other, or mutual support. District Six meals were shared on a kind of barter system, with ingredients or plates passed around to neighbors who otherwise might have gone without. Those neighbors, in turn, would send something around the next day, if they had a little extra or if they’d had some luck fishing in the nearby bay.

“Nobody ever went to bed without a plate of food,” says Marion Abrahams-Welsh. “We knew people who didn’t have food and plates were sent into their home. The beauty of District Six was the sharing.”