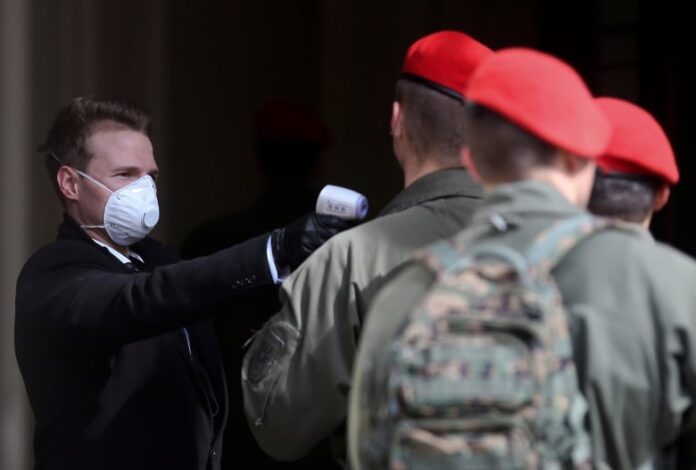 Science magazine had been trying for days to speak to the elusive George Gao, head of China’s Centre for Disease Control and Prevention.

When the magazine asked him if he could point to any mistakes that might explain why Western countries were struggling to flatten the coronavirus curve, he didn’t miss a beat.

“The big mistake in the U.S. and Europe, in my opinion, is that people aren’t wearing masks,” he said.

“You’ve got to wear a mask, because when you speak, there are always droplets coming out of your mouth. Many people have asymptomatic or pre-symptomatic infections. If they are wearing face masks, it can prevent droplets that carry the virus from escaping and infecting others.”

That advice is contradicted by the World Health Organization, the government of Canada and federal public health officials like Chief Public Health Officer Dr. Theresa Tam. On its webpage, the WHO says that “if you are healthy, you only need to wear a mask if you are taking care of a person with suspected [COVID-19] infection.”

“Putting a mask on an asymptomatic person is not beneficial, obviously, if you’re not infected,” Tam said Monday.

Only medical masks such as those labelled N95 are designed and fitted to filter out particles that carry the COVID-19 virus. Other masks, such as surgical masks, are looser fitting and made of material that may reduce concentrations of some aerosol particles.

A 2015 randomized clinical trial found that cloth masks, for example, did not block influenza and respiratory viruses and actually increased the rate of infections among health care workers, and even surgical masks blocked only slightly more than half of virus particles.

Dr. K.K. Cheng, director of the Institute of Applied Health Research at the University of Birmingham in the U.K., said that Tam’s advice makes a dangerous assumption — that an asymptomatic person is not a spreader.

“The important thing about this coronavirus is that some patients start to shed virus, and become infectious, even before they have symptoms,” he said.

“In public health, a principle is we try to limit the source of harmful exposures rather than do mitigation, if we can. Hand-washing is a form of mitigation.

“I’m not suggesting in the least that people should stop washing hands. It’s very important. But if you’re out in public in a supermarket, or in a subway train or on the bus, I think it makes a lot of sense for everyone to wear a mask.”

While officials in the West caution that the explanations for Asian countries’ greater success in controlling the pandemic are complex, officials from the countries themselves — such as Gao and Cheng as well as some South Korean specialists — often point to masks.

Now some European governments are choosing to follow pro-mask policies.

Austria on Monday banned members of the public from entering a supermarket without one. Austrian Chancellor Sebastian Kurz said that is only the first step toward wider adoption of masks.

Next door, the Czech Republic requires everyone to wear a mask in public. The country has experienced a lower-than-average spread of COVID-19.

The Centers for Disease Control and Prevention in the U.S. is also reportedly considering whether it should revise its guidance on masks, according to the Washington Post. It, too, recommends that only those with symptoms and those caring for them wear masks.

Of course, the fact that many countries where mask use is widespread have been more successful at flattening the curve does not necessarily mean that the masks themselves account for the difference. Most experts would point to a mix of factors, including more aggressive testing and tracing of infections and tight controls on movement of the population.

But Cheng said much of the opposition to masks arises because officials in Europe and North America “have never really grasped the point that wearing masks is not primarily to protect the wearer. The original motivation is to protect others.”

“In a severe pandemic, the main objective of any public health intervention is to limit the source of infection, things that are coming out of our respiratory tract,” he told CBC News.

For Cheng, the concern expressed by some public health officials — that people will end up wearing masks that aren’t up to the highest standards — is a red herring.

He said any mouth and nose covering is superior to telling people to cough into their elbows, as the government of Canada does now.

“I just don’t understand that. Really, it’s a simple mechanical thing,” Cheng said. “If people wear masks as a self-protective measure and want to protect themselves from others, then I think you really need a hi-spec mask, and no one has got an oversupply of those.

“But we don’t really need that if everyone practices this.”

The most sophisticated masks must be saved for the health care workers who face the greatest exposure.

Dr. Elaine Shuo Feng is part of an Oxford University team that studied different countries’ approaches to masks. She agrees that health workers must get priority.

“But I don’t think this is a good reason … to tell the public that a face mask is not effective and to work on the supply issue,” she told CBC News. “I think there are a lot of things that you need to do.”

Canadian officials have cited the risk that people won’t use masks properly and could expose themselves to greater danger as a result as one of the reasons not to recommend mask wearing for the general public.

“What we worry about is actually the potential negative aspects of wearing masks where people are not protecting their eyes, or you know, other aspects of where a virus could enter your body,” said Tam.

“And that gives you a false sense of confidence, but also, it increases the touching of your face. If you think about it, if you’ve got a mask around your face, sometimes you can’t help it, because you’re just touching parts of your face.”

Cheng said masks, in fact, inhibit contact between the hand and the mouth, and people can be taught to wash their hands after touching them.

“It’s not a logical argument, really. It’s not beyond the realm of most people’s IQ to learn how to wear a mask properly.”

The WHO’s guidance on the use of medical masks makes clear that their use alone is insufficient to prevent the spread of COVID-19 without proper hand-washing and other measures to protect against human to human transmission.

Not everyone can self-isolate

Cheng agrees that people with symptoms should not be going out at all. But he said it’s wrong to base advice on the assumption that everyone can self-isolate.

“During this phase when we’re locked down, unfortunately, there are still heroes of our society who’ve got to go to work to keep the country going. Health care workers, bus drivers, supermarket workers,” he said.

Cheng said he doesn’t agree with arguments about creating a false sense of security.

“People have raised the hypothesis that if you ask people to wear a mask, they’ll feel invincible, and then they won’t bother with handwashing, for example,” he said.

“There’s absolutely no evidence that this is the case. I would argue it’s the opposite — that this would heighten one’s sense of caution and hygiene, and it would stop people from touching the mouth.”

Shuo Feng stressed that she does not recommend using self-made masks, which do not block the virus.

“I think people better stay at home if they could, stay as much as possible and do the best of social distancing,” she said.

“However, there could be situations that people cannot avoid the crowded areas, and in that case, if they cannot get a surgical mask, then having a self-made mask might be better than not wearing a face mask … it might not be as effective as a surgical mask, but at least it provides some protection.”

In her remarks Monday, Tam did seem to suggest that the government was open to reconsidering its advice.

“We are continuing to evaluate. Of course, we can be flexible if we find any new evidence.”

The Centers for Disease Control in the U.S. denied this weekend that it was about to reverse its advice on masks.

But cracks are appearing in the North American public health establishment. Dr. Scott Gottlieb, a former commissioner of the Food and Drug Administration, said the Centers for Disease Control “should be putting out guidelines … on how you can develop a mask on your own.”

The WHO has advised against the use of cotton or gauze masks in any circumstance. Even for medical masks, the WHO provides strict advice on the correct disposal of used masks and recommends against the re-use of single-use masks.

But Cheng said the wider use of masks can be part of the eventual unlocking of society.

“Maybe two months from now, if we’re lucky, we may emerge from this, and we have to think about how we reopen the economy,” he said.

“We have to reduce social distancing.

“I think everyone wearing a mask for a period of time to be determined would actually help us to get back to normality. People would still have to practise social distancing but without all the schools being closed and so on.”

Shuo Feng said there’s no single approach that will beat the virus, but “now is the right time to talk about face masks and to reconsider the recommendation of face masks to the general population.”

Watch: The National: Clearing up the confusion around whether masks protect against COVID-19

While public health officials tell Canadians not to wear masks unless they’re sick, other countries take a different approach, leading to confusion for some. 2:05