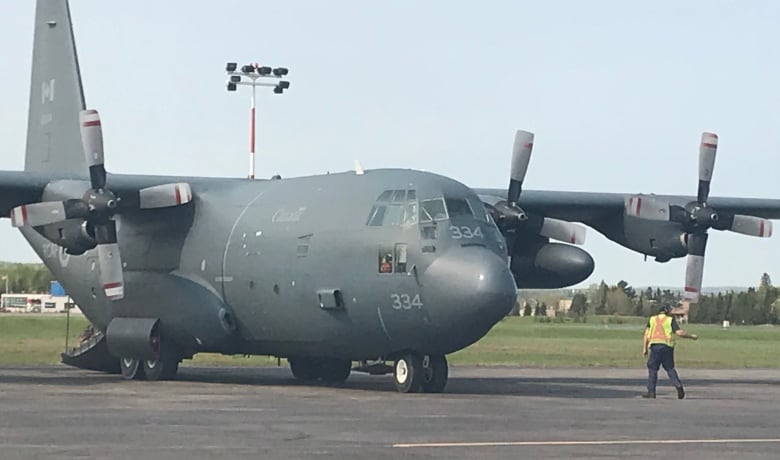 Wind from the north is helping to keep the fire away from Pikangikum First Nation on Sunday, but officials from Environment Canada said more smoke could be drifting into the community on Monday as the wind changes direction. ( Ontario Forest Fires / Twitter)

As the forest fire continues to grow and threaten the community of Pikangikum First Nation in northwestern Ontario on Sunday, a shift in the wind Monday is expected to blow smoke toward the community, according Environment Canada’s severe weather meteorologist Mitch Meredith.

The cool weather on Sunday, combined with the wind from the north, has helped keep the fire away from the community, but a special air quality warning is in effect and the wind changes direction on Monday, Meredith says.

“Late in the morning on Sunday, we’re looking at fair weather today with the wind staying out of the north … and it looks like the winds may ease off and become light early in the evening, ” he added, “but then into [Monday] … we’re thinking the winds will be fairly light in the morning, then it’ll be out of the south and southeast through the afternoon.”

He said on Sunday, the smoke from the fire is “generally drifting southward,” but with Monday’s wind shift, “[the smoke] will drift back over through the area of Pikangikum and could give some local health problems.”

“People may experience coughing and throat irritation and could be at risk for health issues,” Meredith told CBC News.

Along with a wind shift, clouds are expected to roll in on Monday, with a 40 per cent chance of showers through the afternoon and evening.

“It doesn’t look like there’s going to be very heavy showers … and there is a chance that [the rain] could stay south of the town and south of the fire,” he said, “but right now, it looks like the amounts will be … probably less than 5 mm.”

According to the Ministry of Natural Resources and Forestry, the status of the fire remains not under control at just over 3,600 hectares.

“I think basically [the fire] had a quick start and it was within a reasonable proximity to the community,” said the ministry’s fire information officer, Chris Marchand, “but we were able to get some crews on it and really protect that western edge of the fire that was nearest to the community.”

He said fire crews have been focused on protecting the homes and buildings in Pikangikum this weekend, by installing sprinklers around the structures.

According to a written media release from the Canadian Armed Forces, a Hercules aircraft from Winnipeg landed in the fly-in community on Sunday at around 11:30 a.m., and a second plane is en route from Winnipeg as well. The planes will be used to move people out of the community. 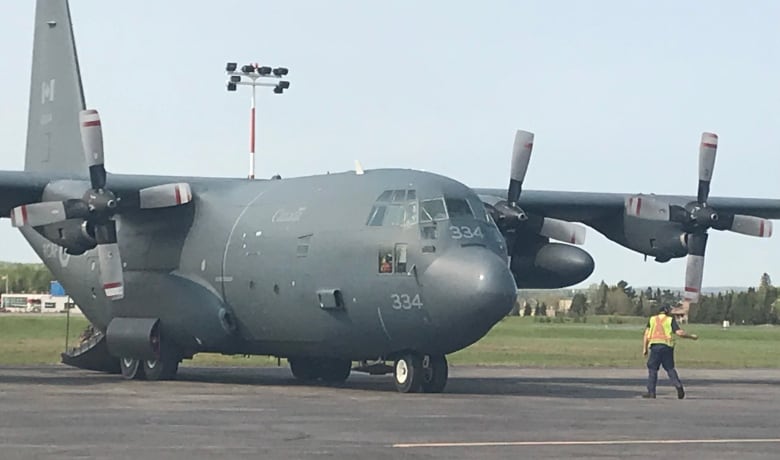 The first Hercules aircraft, with passengers from Pikangikum First Nation, landed in Thunder Bay on Thursday at around 5 p.m. (Christina Jung / CBC)

“It is still too early to assess if we still provide support tomorrow, but we will continue to provide our aircraft and support as required and directed by the province of Ontario,” Canadian Armed Forces public affairs officer Jenn Halliwell stated.

Officials said the exact number of evacuees and who will host them cannot be confirmed at the moment, but rangers will be able to “provide final evacuee numbers, the number of aircraft used and how many fighters were required to the chosen host communities,” at the end of the day.