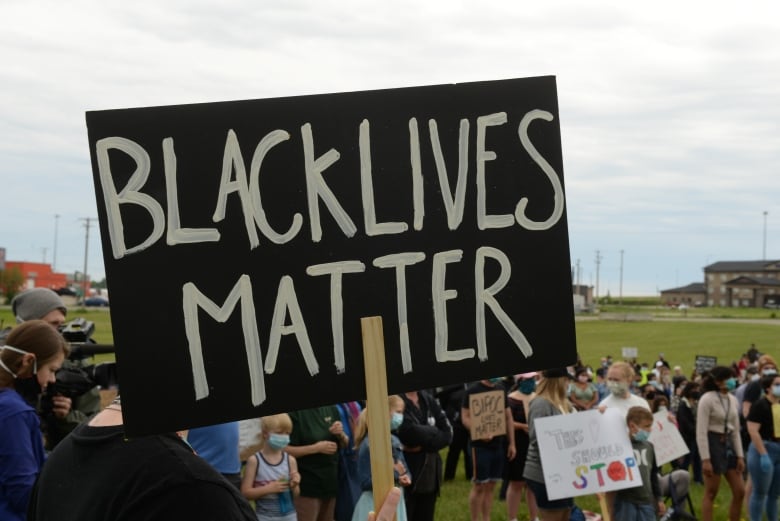 Hundreds kneeled on Saturday to mourn victims of racism and police brutality.

If it weren’t for the backdrop, the image could have been captured in any major city across North America in recent weeks.

But this Black Lives Matter demonstration took place in a field, outside of a grocery store in Innisfail, a small Alberta town located about 120 kilometres north of Calgary.

“We are here today to remind people who say that racism isn’t a problem in central Alberta. We’re here to raise a little hell,” said speaker Dieulita Datus, from Lacombe, Alta.

“For the lives of all of those lost in the Atlantic slave trade … for the Indigenous people who lost their lives to sickness and famine and defending their land … for the lives lost in residential schools … for the lives lost to police brutality … for the Muslims who are targeted daily … in memory of all the stolen sisters, the murdered and missing Indigenous girls … in the memory of George Floyd,” Datus said, with each injustice on her list followed by the cry “we’re here to raise a little hell” echoing through the crowd.

It was a large turnout for a demonstration that almost didn’t happen.

When organizer Brittany Bovey first announced her intent to host a Black Lives Matter solidarity event in a social media post two weeks ago, she was met with a torrent of racist and hateful comments and threats, prompting her to cancel the rally.

Innisfail’s mayor initially said he’d never known racism to be an issue in the town of 8,000 people. The backlash was swift, prompting the mayor to apologize for his comments, admitting what he said wasn’t reflective of citizens’ experiences.

He, along with all but one member of the town’s council, committed to stand in solidarity with anti-racism demonstrators and provide support to ensure Saturday’s event could go forward safely.

“I fully acknowledge and accept that I have much learning to do on the topic, and am committed to doing better. I’d like to use this situation as an opportunity to educate myself on the many, many racism-related issues of which I admittedly know far too little. My personal ignorance, in this instance, was simply inexcusable,” Mayor Jim Romane said in advance of the event.

Romane was there Saturday, speaking on stage and kneeling with other protesters, ready to listen. He said Innisfail has had an influx of non-white newcomers in recent years, like Filipino and Syrian residents, who he’s eager to support and learn from.

“This is a peaceful movement we’re supporting and we want to keep it that way. We want to listen and learn from it,” he said.

There was one moment of tension at the event, when a man on a motorcycle drove into the midst of the gathering, revving his engine and shouting “all lives matter,” along with some counter-protesters. He was met with a chorus of voices replying “Black lives matter” and was swiftly escorted away by police.

The event was one of hundreds across the U.S. and Canada ignited by the killing of George Floyd, a 46-year-old Black man who was killed in Minneapolis when a white police officer kneeled on his neck for nearly nine minutes while he lay unarmed and handcuffed, telling the officer that he couldn’t breathe.

Canada’s relationship with systemic racism and police violence has also been dragged into the spotlight.

This week, the RCMP commissioner and Alberta’s top RCMP officer each walked back comments denying that systemic racism exists.

RCMP have been under increased scrutiny this week as video of the violent arrest of an Indigenous chief in northern Alberta was released.

“The whole world is watching right now and we have to take responsibility for what is happening in the world,” said Theresa Cardinal, who is Cree and lives in Red Deer.

“There’s so much structural racism built on the dispossession and genocide of my ancestors that people are so unaware of. There’s so much education that needs to be done … growing up, knowing the colour of my skin, I knew I was going to be treated different.”

Protesters have called for police funding to be reallocated to community support organizations.

Datus thanked RCMP officers in attendance at Saturday’s event and said while she appreciated their individual presence, change on a broad scale is needed.

“When we talk about defunding the police we’re asking for change, not for your jobs,” she said.

Saturday’s event was rebranded from a protest to a “community conversation.”

And the demonstration was accompanied by plenty of conversation and debate.

Dax Williams, a Black man who travelled from nearby Red Deer for the event, spoke patiently for nearly half an hour with a white man in the crowd, breaking down misconceptions around racism.

Williams said he found benefit in speaking with someone who doesn’t share his opinions.

“There’s a lot of people who have questions and would like to discuss what’s happening … that guy was very reminiscent of what I see when a lot of people are just frustrated,” he said. “I think it’s always worth it to put yourself out there to talk to people.”

Datus said the crowd of allies who attended the demonstration and the accompanying conversations give her hope.

“We’re here in the midst of pandemic … to lend our voices and say we want change. If that’s not optimistic I don’t know what is,” she said.