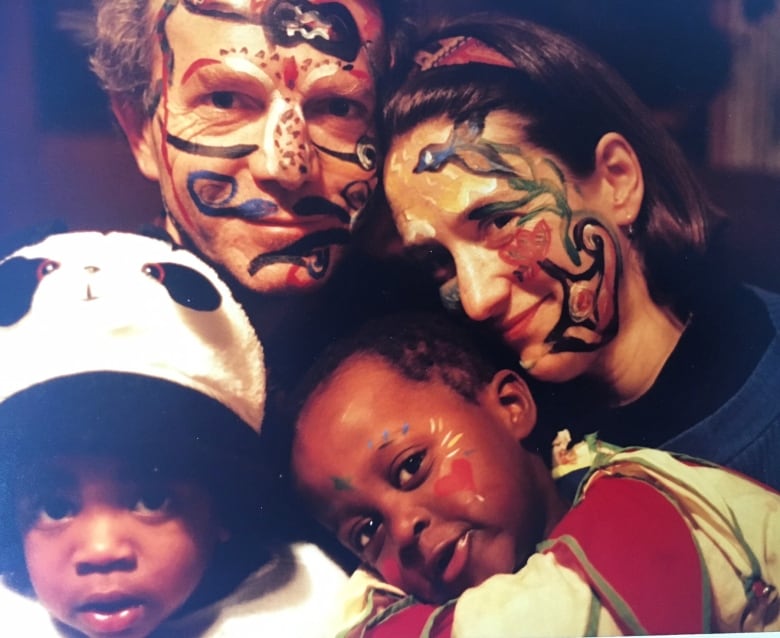 It was March 2020, just a week before the entire world shut down, when Michel Prentice received a message on LinkedIn that changed his life.

“He was like, ‘I think you are my brother,'” recalled Prentice. “And he was sending me photos of myself asking, ‘I think this is you?'”

Since then, he has been reconnecting with the family he never knew he had.

30-year-old Michel was born in Haiti, and adopted at just five weeks of age by his Canadian parents, Susette and David. The couple, from the tiny town of Flesherton, Ont., also adopted an 18-month-old named Jordan, who would become Michel’s brother. The two grew up as the only Black children in town.

The Prentices had been told by the orphanage that Michel’s mother died giving birth to him, and that his father was too poor to care for him. But what Michel didn’t know was that he was the last missing piece of a family puzzle that had been torn apart three decades prior.

South of the border, 36-year-old Eloi Ferguson had been on a mission to find his biological family. His story mirrored Michel’s — he’d been adopted from Haiti by a white couple from Kennebunk, Maine, and raised with adopted siblings. After years of searching, a photo dug up from a relative’s family photo album with a name on the back is what finally led him to his baby brother.

“It had Prentice on it,” recalled Eloi. “I immediately went on Google, and just Googled his name.”

For Eloi, it was the end of a 15-year search. For Michel, it was the beginning of a family reunion he wasn’t prepared for.

He would soon learn that Eloi wasn’t his only brother.

In 2004, when Eloi was just 19, his adoptive father became friends with a Haitian man who spent much of each year back home, working as a bus driver. They knew it was a longshot, but his father gave the man some information about Eloi and asked him to see what he could find out about his biological family.

It turned out that Eloi had relatives living in the U.S., just a few states away.

“The next thing you know, my cousins emailed my [adoptive] father from Florida and my dad told me that I had family,” said Eloi.

He met his aunt and cousins for the first time in 2005. They told Eloi that his mother’s mental health had deteriorated when he was a child, and that she’d been sent to live in a care facility and was still alive.

He also learned he was one of six brothers.

“I was overwhelmed with emotion,” Eloi said.

He was told his father, Andre Amilcar, had been too poor to care for six boys on his own and had no choice but to split the family up. His brother Etienne, nine years-old at the time, was sent to live with his grandmother in Haiti, and eight-year-old Joseph lived with an aunt. Too old for the orphanage, seven-year-old Ezekial was sent to work on a farm in the Dominican Republic.

The remaining three brothers — Eloi, Ishmael, and Michel — were adopted by North American families. No one knew where they were.

“Once I found that out, it was my sole mission to seek out these other siblings,” Eloi said.

In 2012, Eloi Ferguson met his brother Joseph Amilcar in Florida along with his cousins, and connected virtually with Ezekial Amilcar who was by then living in Brazil, and Etienne Amilcar who was in Chile.

The older brothers told him their father had held out hope for years that their family would one day reunite. Unbeknownst to the adopted families, the orphanage had been sending Andre photos and updates. But about 15 years ago, those photos suddenly stopped coming.

“I went to the orphanage to try to find out about them, but they said they [Michel’s family] changed their address,” Etienne explained. “Every day my dad would cry, [and] we would cry living with that, not knowing.”

“We probably stopped sending pictures, I would think by the time the boys were 12 or 13,” David Prentice told CBC News from his backyard in Flesherton. But he says they’ve never moved. “We have lived here the entire time.”

He had no idea the photos were being shared with Michel’s father, and if given the chance, said he would have been happy to stay in touch with Michel’s biological family.

Andre Amilcar would never get to see his youngest three sons again, falling ill with kidney disease in 2012 and passing away soon afterward. But, he did learn his eldest boys had reconnected with Eloi.

“For him it was a miracle to hear about his son,” Ezekial said, in tears. “He died in my arms in hospital, he squeezed my hands as he was dying. He never got to meet Eloi.”

With four of the brothers reconnected, it would be another six years before the family got a solid lead about Ishmael. In 2018, the results of a 23 And Me DNA test led Eloi to a man named Joshua Axelson in Duluth, Minn. The 34 year old was skeptical.

Joshua had been told his birth name was Roshlyn Gerrard. But a video call with Eloi made him question everything.

“It was the first time someone resembled my face,” said Joshua. “Words can’t explain how crazy, awesome, and a little uncomfortable it was.”

Joshua insisted on a second DNA test, and it confirmed what Eloi already knew.

But there was still no sign of Michel. Then in March 2020, Joseph found a photo in a family album with a last name scribbled on the back: Prentice.

From there, it took no time at all to find his LinkedIn page.

“I was taken aback, and I knew that I had to meet them and see what they looked like,” Michel said.

COVID-19 put the brakes on meeting face-to-face, with a global pandemic declared a week after Michel received that fateful message.

Instead, the six men who are spread across North and South America have spent the past year and a half reconnecting through group chats and video calls. With Etienne and Ezekial speaking only Spanish and Creole, they bridge the gap the best they can with Google Translate.

The brothers can’t wait to eventually meet in person, and Michel hopes he will be able to travel to Haiti to finally meet his mother.

“Knowing that she’s alive, I felt at peace,” said Michel. “I felt like this was so gratifying. I feel full now.”

“It’s like a weight has been lifted off my shoulder,” Eloi said, smiling widely. “It feels like now we can start our relationship.”

Watch full episodes of The National on CBC Gem, the CBC’s streaming service.