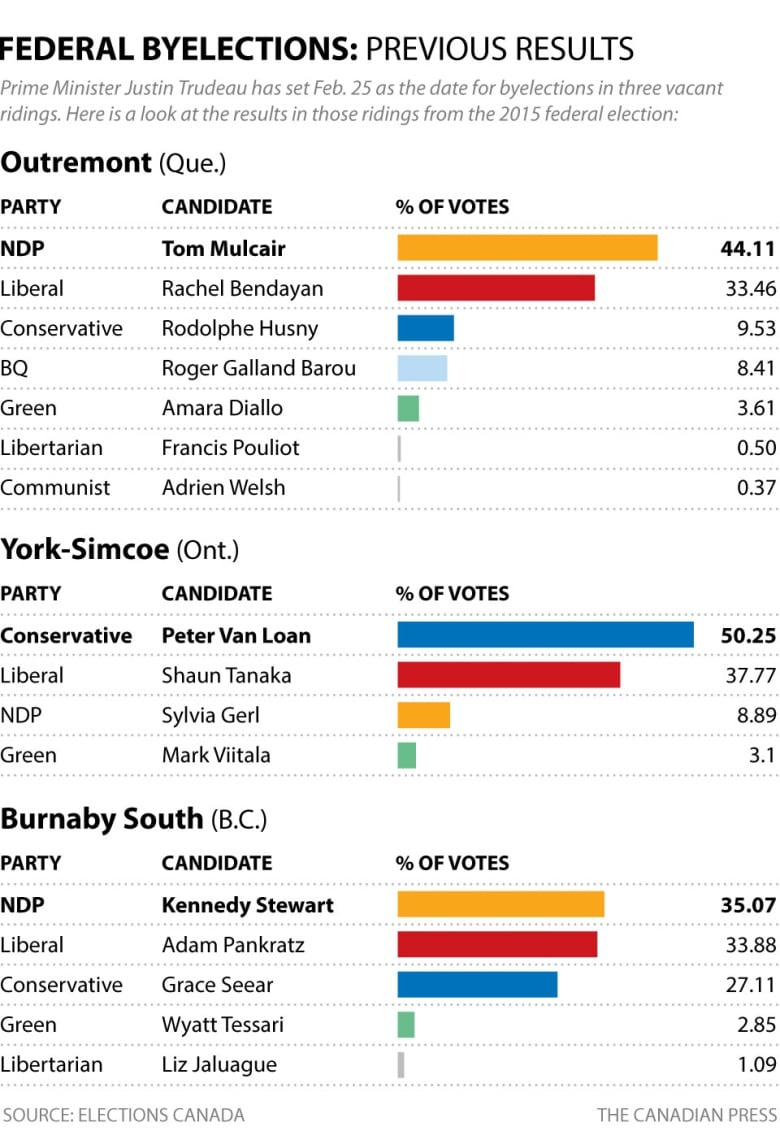 And they’re off! (Finally.)

The anticipation and speculation came to a close on Wednesday when Prime Minister Justin Trudeau set Feb. 25 as the date for three federal byelections — some of the last electoral tests to come before October’s general election.

The votes could make history, particularly since NDP Leader Jagmeet Singh is putting his own political future on the line as he tries to secure a seat in the House of Commons in the B.C. riding of Burnaby South. Singh, a former member of Ontario’s provincial legislature, has been without a seat since he won the leadership of the NDP in October 2017.

While that is expected to be a hotly contested byelection, the races in Outremont and York–Simcoe also feature a number of story lines worth watching over the next 46 days. Here’s how the parties stack up as the byelection campaigns officially begin. 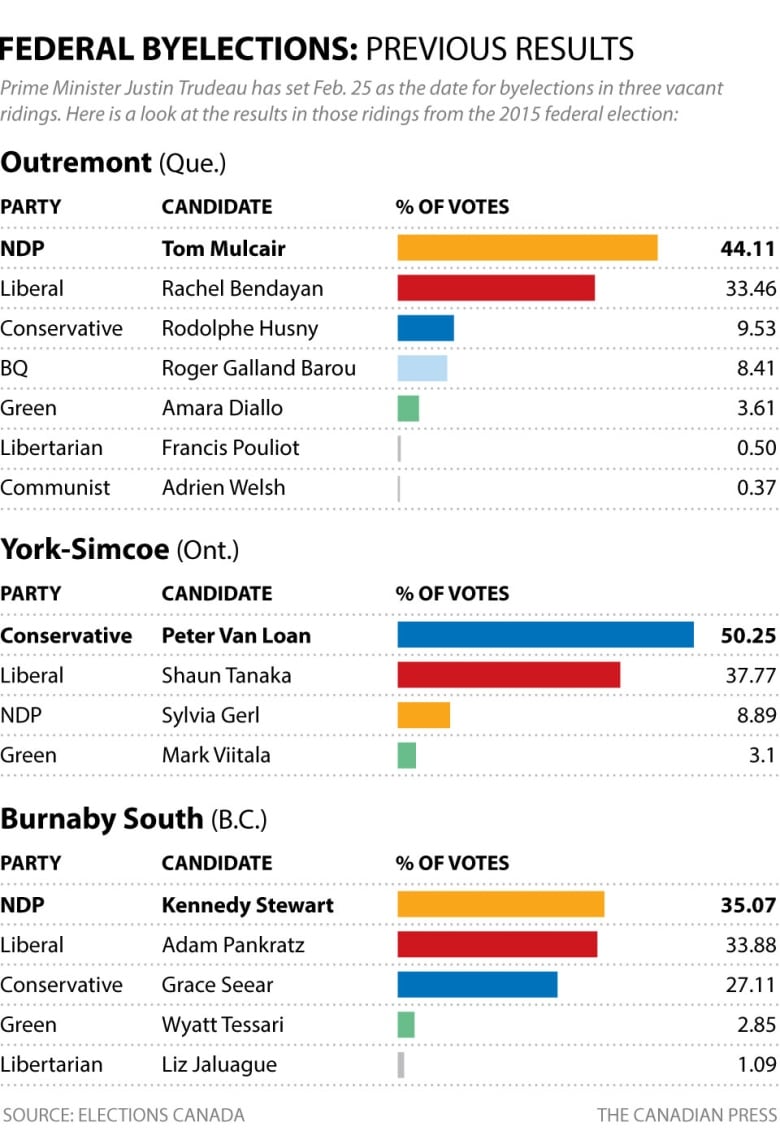 Burnaby South: All eyes on Singh

The starting pistol might have gone off on Wednesday, but Singh’s campaign in Burnaby South began in early August when he announced he’d be standing as the NDP’s candidate in the riding.

It might turn out that Singh needed the extra time. The NDP won the riding by a margin of just 1.2 percentage points over the Liberals in 2015. A survey conducted in November by Mainstreet Research (with an admittedly small sample of 330 decided voters) found the New Democrats trailing in third in the riding.

That poll result is far from implausible. While the NDP has held sway in the area since the 2004 election, it was always by the narrowest of margins. Burnaby South was a three-way race in 2015 and the polls suggest the New Democrats have lost support in British Columbia since the last election.

The partisan ‘lean’ in Burnaby South — the measure of how the riding’s voting behaviour over the last three elections compares to the country as a whole — favours the NDP. It is 16.8 points more New Democratic than the rest of the country, which ranks it as the 31st most NDP-leaning riding in Canada. It ranks far lower for the Conservatives (189th) and the Liberals (221st), but a potential three-way contest still puts both of those parties within striking distance. 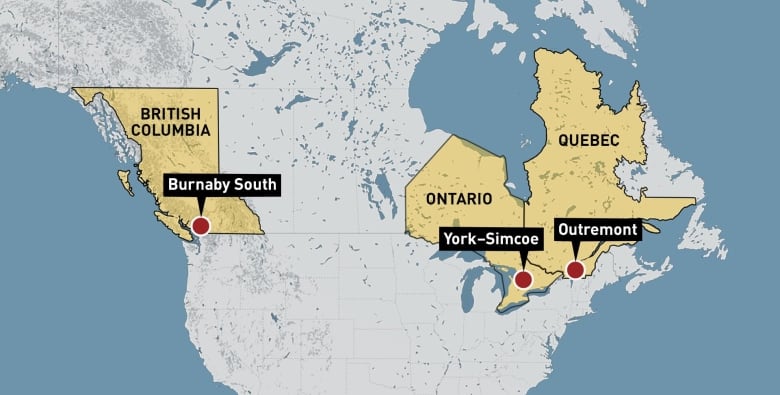 Byelections in the ridings of York–Simcoe in Ontario, Outremont in Quebec and Burnaby South in B.C. will be held Feb. 25. (CBC)

The New Democrats will be helped by the Green Party’s decision not to run a candidate against Singh. But the Greens took just 2.9 per cent of the vote in 2015, so the benefit is modest. Leaders generally give their party a significant boost in a riding when they put their names forward for the first time. If this happens for Singh, then the NDP should be the favourite.

But leaders tend to run in ridings where they have some personal connection. Singh, a former Ontario MPP who represented a riding in Brampton, has no such connection to Burnaby South (though he did recently buy a home there). That could reduce — or erase — any “leader’s bump” for the NDP in the riding.

The demographic profile of Burnaby South also could limit Singh’s appeal. According to the 2016 census, 39 per cent of the riding’s population is Chinese, while just eight per cent is South Asian. The Liberal and Conservative candidates, Karen Wang and Jay Shin, both hail from the Chinese-Canadian community.

The partisan lean and current projections would put Burnaby South in the NDP’s column — but uncomfortably so. If there is no leader’s bump for Singh, this riding could be a tough one for the New Democrats to hold.

Outremont: Will a Liberal red wave in Quebec start here?

The NDP’s orange wave in Quebec, which washed over the province in the 2011 federal election, got its start in Outremont four years earlier when Tom Mulcair stole the seat away from the Liberals in a 2007 byelection. But the NDP’s fortunes are on a downward trajectory in the province — and that could cost the party this iconic Montreal riding.

Despite losses elsewhere in Quebec in 2015, Mulcair still held on to Outremont by a margin of 10.7 points over Rachel Bendayan of the Liberals. Bendayan is running again, while the New Democrats have put up Julia Sanchez to carry the party banner.

With the help of Mulcair’s personal appeal, Outremont had one of the highest NDP partisan leans in the country over the last three elections: 22.9 points, putting it 16th on the list for the party. But the Liberals also have some strength here. The riding is only slightly more Liberal than the country as a whole, but that puts it 152nd on the party’s list. Without a towering figure like Mulcair on the ballot, Outremont looks like the kind of riding that would fit comfortably in a Liberal majority government. 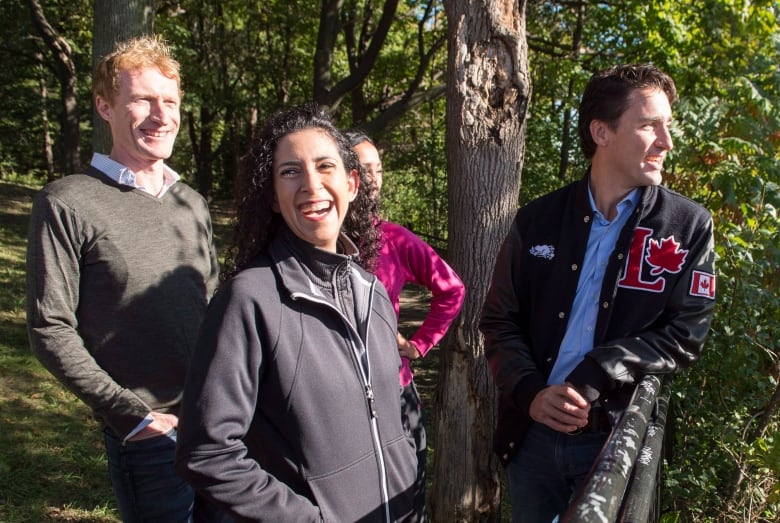 Without Mulcair, the NDP is likely to suffer a significant hit in support. In recent provincial and federal elections, parties have averaged a loss of about six points in ridings abandoned by former leaders. Combine that with the swing in support in Quebec — the Liberals have gained six points since 2015 and the NDP have lost nine points, according to the CBC Poll Tracker — and the Liberals’ prospects in Outremont look good.

Quebec is the only region of the country where the Liberals have more support today than they did in the 2015 federal election. Accordingly, Trudeau’s team is banking on seat gains in Quebec to offset losses elsewhere.

Taking into account the departure of Mulcair, the partisan lean of the riding and current polling trends, Outremont could be the first NDP domino in Quebec to fall to the Liberals.

York–Simcoe: The only safe bet

The tea leaves are easier to read in the Ontario riding of York–Simcoe, located just north of Toronto. The Conservatives have held it since 2004 and won it by a margin of 12.5 points over the Liberals in 2015. Its partisan lean ranks it 45th on the Conservative list — suggesting that only a catastrophic election result for the party would put the riding at risk.

The polls have been reasonably good for Andrew Scheer and the Conservatives in Ontario, so their strongholds there should be even stronger. That was the case in the December byelection in the eastern Ontario riding of Leeds–Grenville–Thousand Islands and Rideau Lakes, where the Conservatives increased their 6.8-point margin of victory over the Liberals in 2015 for a 22-point stomping of the governing party’s candidate.

That margin might be the thing to watch in York–Simcoe, where Scot Davidson will be running under the Tory banner (the Liberals will name their candidate on the weekend). The riding has been 20 points more Conservative than the country as a whole over the last three elections. If the Conservatives are in a position to form a government, York–Simcoe is the kind of riding they should expect to win with at least 55 per cent of the vote.

Out of the gate, the Conservatives look likely to hold one seat and the Liberals look well-placed to make a gain. The toss-up is Burnaby South — and whatever happens there will have repercussions for the rest of 2019.