Shortage of children’s pain relievers is crowding the ER — but there are solutions, doctors say 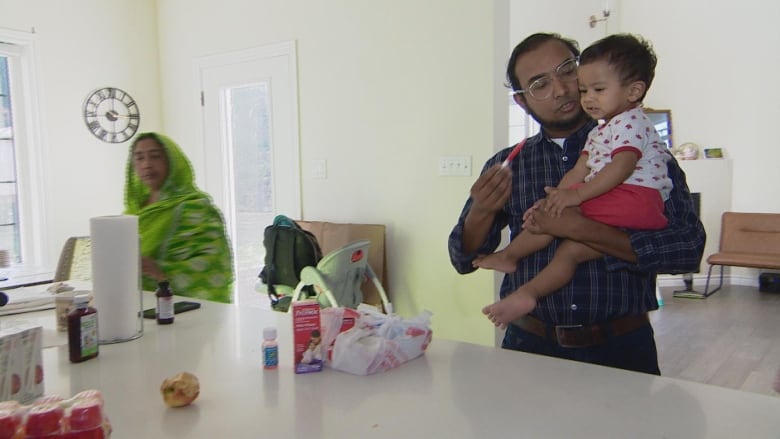 After months of watching his toddlers suffer fever after fever — with limited access to pain and fever-reducing medications — it became almost unbearable, Washim Ahmed says.

“It’s absolutely devastating to see your child is going through pain and you’re completely helpless,” the Pickering, Ont., father of two said.

With the cold and flu season in full swing across the country, and new COVID variants arising worldwide, many parents are sharing in Ahmed’s frustration as pediatric pain and fever-reducing medications containing acetaminophen and ibuprofen have become all the more scarce after a six-month Canada-wide shortage.

A combination of factors has created the shortage, according to information from epidemiologists, emergency room doctors and Health Canada officials: a lack of raw ingredients to make the drugs has combined with an uptick in respiratory viruses fuelled by the relaxed COVID measures. And panic buying is depleting stock as soon as it comes in, pharmacists tell CBC.

The solution some parents are turning to is the emergency room: a place where doctors say families are spending hours waiting to be seen for colds and viruses so they can get pediatric pain relievers usually found on pharmacy shelves.

In Ahmed’s case, his family saw an uptick in hospital visits until he was able to stock up on medication while in the U.S.

“We had at least, like, six hospital visits this year with my kids,” said Ahmed, who said it got worse after his three-year-old went to preschool and brought home infections.

So while in Detroit, Ahmed loaded up on children’s pain medications at a well-stocked pharmacy, bringing extra home for other families. When he offered to share the medication with other desperate parents, he said one person drove more than an hour — from Oakville, Ont. — to get a bottle.

The shortage means that preventative measures like vaccinations against the flu and COVID, masking and hand washing are critical, physicians say. But Dr. Anna Banerji, a specialist in infectious respiratory diseases in children and the director of Global and Indigenous Health with the University of Toronto said she understands the shortage is creating anxiety for parents.

I think that this is going to be a difficult respiratory season,” she said. “We still have COVID and we’ve removed the public health measures, and you’ve got these kids mostly unvaccinated at school.”

But she said she’s hopeful the shortage will be short-lived.

“This is pretty basic medication — we could have tried to resource it in other countries.”

In the meantime, Banerji said that parents taking their kids to the emergency department in order to get pain and fever-reducing medication is putting additional stress on Ontario’s already overcrowded ERs — and driving up wait times further.

She and other health officials urge parents to look at alternatives to going to the ER: giving a child fractional adult doses or asking a local pharmacist to create a compound liquid form of the pain reliever.

Be precise with doses, pharmacist says

Banerji said people should avoid using expired medications and be careful in giving fractional doses. When it comes to ibuprofen, the limit a child over the age of six months can have is 10 milligrams per one kilogram, which means a 20-kilogram child can be dosed with 200 milligrams of crushed adult ibuprofen.

With acetaminophen, a child over six months can take 10 to 15 milligrams per one kilogram.

“If you give too much, you can have problems with the child, especially with the liver,” Banerji said. “And you need to know that you can’t give aspirin to a child with a fever because they can have a serious reaction to it, a serious complication.”

Turning to a pharmacist is another option, provided they have the ingredients and the capacity to compound medications. The option is no long-term panacea to the shortage; they’re already juggling flu and COVID shots and only offer compounding in certain locations, said Danielle Paes, chief pharmacist officer for the Canadian Association of Pharmacists.

“That is something that you’ll need to talk to your pharmacist or your local pharmacy to figure out what is available at that location,” she said of the compounding service. “It’s not as commonly available. You can’t just walk into any pharmacy and have that service available, unfortunately.”

In Ottawa, pharmacist Lubna Fawaz said a lack of raw ingredients to make the children’s fever-reducing medications has driven shortages in her store since early spring of 2022. She’s tried to offer alternatives, from suppositories to compounds.

“If I don’t have any solutions, it would be a disaster.”

Though the regulator is reviewing proposals from certain companies, Sharma said manufacturers need to show “that it is the same or very similar to the product that we have [and that it’s] manufactured under the appropriate conditions.”

Regulations also require that product labelling is bilingual, something Banerji suggested could potentially be partially waived given the urgency of the situation.

It’s important to get this “vital” medication that “prevents a lot of suffering in the children and a lot of anxiety in the parents,” she said. “If the approval process to get it into French is quick, then that’s OK.”

But if it’s taking weeks, she said it’s time to consider alternatives, such as a link to a website for bilingual information or a leaflet or handout at the counter.