She flew on Air Canada to an accessibility conference. She landed with a damaged wheelchair 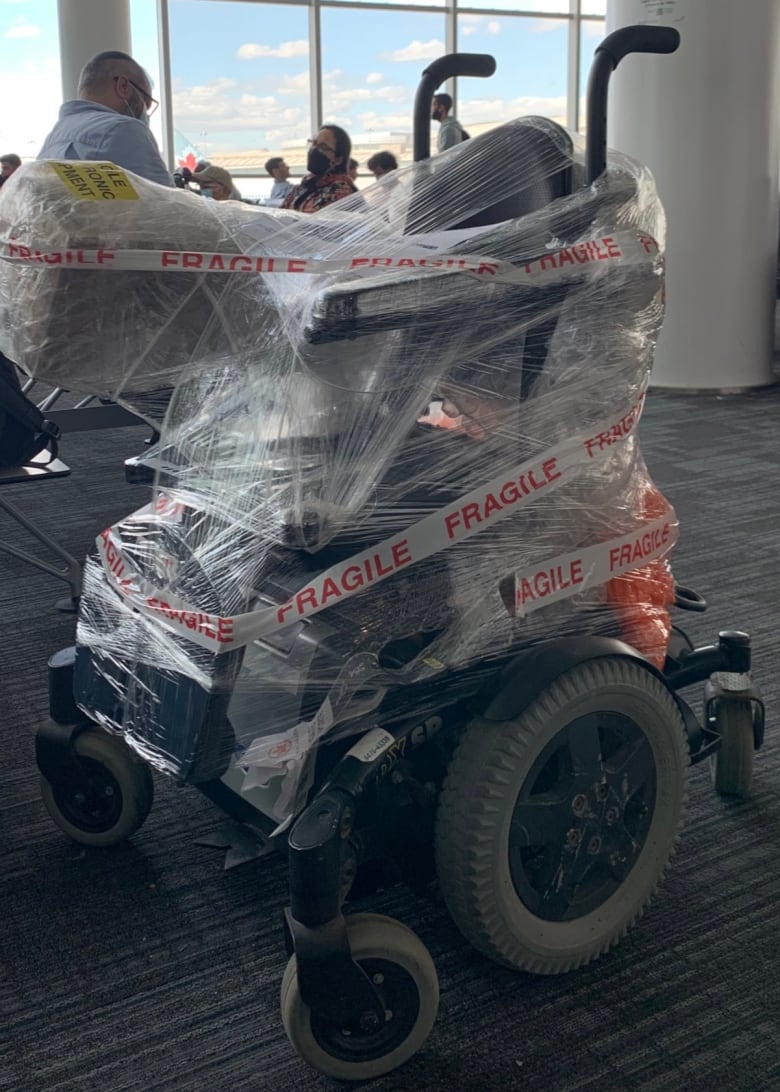 Maayan Ziv says she did everything she could to make sure her wheelchair would arrive in one piece before she left Toronto for an accessibility conference in Israel.

The accessibility advocate and chief executive says she called Air Canada to confirm they could transport her wheelchair on the trip to Tel Aviv, and arrived four hours before her flight on Wednesday to bubble wrap it and tell airline staff how to safely transport it.

Despite all her precautions, she says her sister found her wheelchair “totally damaged” when their almost 11-hour flight landed Thursday morning.

“Imagine someone basically chopping off your legs when you arrive somewhere — that’s the equivalent of what it feels like.”

Ziv, 32, says her wheelchair is an extension of her body — when it’s taken away, it strips her of her independence, mobility, health and comfort.

While the experience was traumatic, she says it wasn’t her first time a wheelchair of hers has been damaged or completely broken during a flight. In fact, Ziv says this amounts to a kind of discrimination that is a reality for many people with disabilities.

And it needs to change, she says.

“Whether it be Air Canada or any airline, there needs to be a proper and detailed look at how we treat people with disabilities who travel,” said Ziv.

Ziv says she can stay in her wheelchair in any other mode of transportation, such as buses and trains, but not on passenger planes.

That’s because people using wheelchairs are required to sit in an airplane seat during flights, according to federal law — something that disability advocates say needs to be scrapped.

Last month, Air Transat staff dropped a 46-year-old man, who also uses a wheelchair, while transferring him to his airplane seat.

David Lepofsky, a Toronto lawyer and chair of the Accessibility for Ontarians with Disabilities Act Alliance, says Ziv’s case is not unique, and is a failure both of the airline and the Canada Transportation Agency (CTA), which regulates air transit in the country.

“The people who get on an airplane trust the airline to bring them to their destination safely and in one piece, and if they brought them to a destination but destroyed their legs in the process, passengers would be outraged,” said Lepofsky.

“If the regulator made it clear that there would be strong, powerful consequences for this kind of foreseeable, predictable and appalling conduct, the airlines would sit up, take notice and fix it,” said Lepofsky.

The CTA’s website does say carriers must immediately provide the passenger with a temporary replacement that meets their needs until their original mobility device is repaired or replaced, or until the passenger is reimbursed.

Additionally, the airline must:

The CTA says airlines could pay a penalty of up to $250,000 and the agency says it will award compensation to a person in certain circumstances if they file a complaint.

Ziv says her wheelchair was valued at roughly $30,000 and expects to spend up to a year to source all the parts and customize a new one. Without her chair, she says she has pain throughout her body and might not be able to participate at the conference, titled Access Israel, where she says she was invited to speak.

In an email to CBC Toronto, Air Canada says while the company successfully carries tens of thousands of customers who use mobility aids, in this case they did not meet their “normal service levels.”

“We did respond to this customer’s concerns immediately at the airport, including arranging for a specialized wheelchair service to fix the damage,” the airline’s statement reads.

“We offered the customer a voucher as a goodwill gesture, and we remain engaged with the customer to ensure the device is repaired.”

Ziv says that “goodwill gesture” amounted to a $300 e-coupon, provided by customer service in the baggage claim department. She calls the move “insulting” and says it shows a lack of attention and understanding.

“That doesn’t cover the cost of the tremendous amount of pain and anguish that I’m experiencing, it doesn’t cover the damage and the cost done to their brand as an airline, and it definitely doesn’t solve any problem that any future traveller would have,” said Ziv.

She says the company later told her in an email that it would cover the cost of repairing the wheelchair, or a possible replacement.

“That’s not enough,” she said.

“We need a better, more inclusive and equitable approach to treating people with disabilities.”