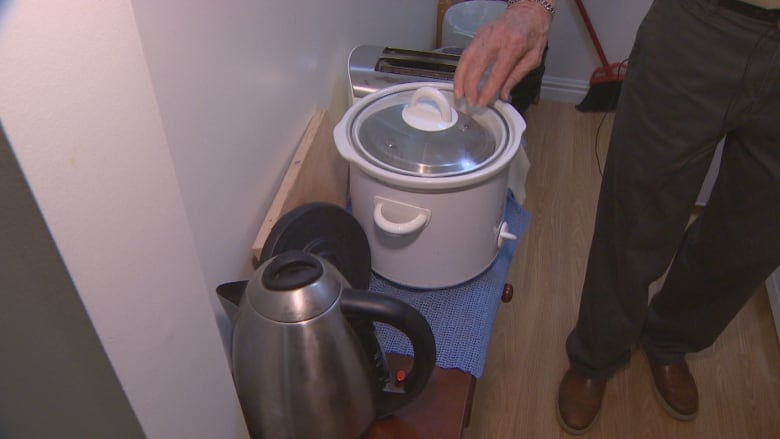 Ninety-year-old David George Bryant moved into Drumlin Hills in the Town of Bridgewater, N.S., nearly a decade ago because his memory was failing.

He and his wife would burn their dinners after forgetting them on the stove.

So Bryant chose an assisted-living suite at Drumlin Hills while his wife moved into a nearby long-term care home. This way, he could visit her three times a week and still have food and housekeeping services in his apartment.

Now Bryant, along with others in assisted-living are worried about their futures. Last week, they received notice from Rosedale Investments Limited — the company that bought the building this year — that three daily meals, weekly housekeeping and assistance from staff will stop on Nov. 30 and will no longer be included in their leases.

Many seniors in the building fear they’re being pushed out because they cannot cope on their own.

“The change is coming so suddenly … and change is not a good thing” for seniors, says Bryant.

The building has 24 assisted-care units in which residents get help with meals, laundry and cleaning. There are also 72 independent living units that allow seniors to downsize from their homes while doing their own cooking.

Bryant says tenants were unexpectedly given forms asking them to agree to new leases last week.

“I’ve got too many people coming at me with a form saying fill it out, you’re going here next, or you’re going to do this next. I want to know, what is next? What am I getting into?” he said.

The monthly rent has been reduced but so have the services. The letter states “rent will now include a stove and a dishwasher. Units will be converted with the new appliances as they become vacant. Tenants will either be moved to completed units or have work done to their current unit. Alternatively, you could have a toaster oven added to your current unit (not a dishwasher and oven) and opt out of the enriched services on September 1, 2022.”

Bryant says having a stove in the apartment is unsafe for someone with memory loss. He says he will refuse a stove in his apartment, which would leave him to fend for himself without adequate cooking facilities.

An elderly couple in their 80s spoke to CBC about their worries, but refused to be named or appear on camera because they fear living conditions could be made worse for them.

The couple moved into the building a few years ago because of the community environment where like-minded people can interact, eat and enjoy activities together.

“We’ve talked to a couple of people just this morning who are afraid that they’ll just be kept out of the building, basically because they can’t provide for themselves anymore, like shopping, food preparation and such and they’ll have to leave,” he said.

“We have two tenants who are over 100 years old. I don’t know how they’re going to cope,” she added.

Tanya Wentzell from Lunenberg is worried for her mother-in-law in Drumlin Hills. She says with the housing crisis, there aren’t many options.

“Right now her unit is equipped only with a microwave, fridge and sink. So we’re trying to figure that out and we don’t have a lot of time to do that.

“We put our family members there thinking that it was a permanent place…. And now that may not be the case.”

Drumlin Hills’ owner Rosedale Investments Limited is part of Halifax Harbour Properties and both are owned by Joseph C. Arab.

When CBC reached out, a representative of Halifax Harbour Properties said she was given orders not to comment on the sale.

The administrator of Rosedale Investments Limited who sent out the letters to the tenants of Drumlin Hills refused to comment on the sale. She said “absolutely no comment,” don’t call again, and hung up the phone.

The owner was in the news five years ago, when a couple looking for an apartment said the Arab Brothers, another company owned by Arab, asked them to pay a deposit along with their application. The practice is illegal in Nova Scotia.

Mayor calls on province to help

Bridgewater Mayor David Mitchell said because the building is zoned as multi-unit residential and is listed as a private business, there’s nothing the town can do to keep the assisted living units as is.

With just one other facility in Lunenburg County for seniors, he says this situation is incredibly concerning.

“I don’t know where these individuals will go or what they’ll do,” said Mitchell, whose father also once lived in Drumlin Hills.

“This is for people who can’t live fully, independently in their own home, and they’re nowhere near that stage where they should be in long-term care. So this gave them the dignity and independence to live on their own while having their meals taken care of and things like that.”

Last week, Mitchell sent an email to the province saying they have a role to play and should step in.

CBC also reached out to the province. Khalehla Perrault, communications and media relations adviser with Nova Scotia Seniors and Long-term Care, said the building is not licensed or funded by the government so the department will not take any action.