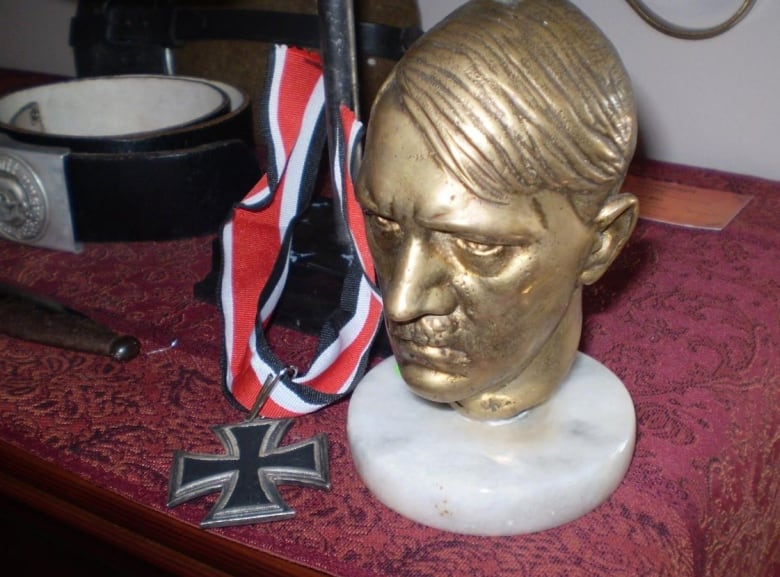 WARNING: This story contains images, language that may be distressing.

The hospital in Thunder Bay, Ont., has removed a senior official from a leadership council for violating its social media policy after images of Nazi-affiliated items were discovered on his Facebook page.

Keith Taylor would also no longer be serving as the co-chair of the patient family advisory council at the Thunder Bay Regional Health Sciences Centre (TBRHSC), where he had volunteered for more than a decade, a spokesperson confirmed Tuesday, citing the hospital’s social media policy.

He posted more than a dozen times to his public Facebook page, mostly in 2012, with images of swastikas, a bronze sculpture of Adolf Hitler and a military badge, among other items.

One post, about the Vietnam Veterans Memorial, used a slur toward people of Asian heritage; other posts made jokes about Nazis, including one comment with Taylor calling someone “my little nazi.”

CBC News was first made aware of these posts Sunday, after being contacted by an employee at the hospital.

“The individual mentioned in your request is not an employee of TBRHSC, and is no longer serving in a voluntary role on the patient and family advisory council,” hospital spokesperson Marcello Bernardo said in an emailed statement Tuesday morning.

Bernardo said it was an internal human resources matter, but cited the hospital’s social media policy in his statement and declined further comment.

It wasn’t until speaking with CBC News that Taylor said he learned he was no longer serving in the voluntary role with the hospital.

“I’m not happy about it,” he told CBC. “I’ve probably been involved in over a thousand policy developments and changes that would benefit patients.”

He added he understood the decision made by the hospital.

“I’m not a racist. I’m not a Nazi. I’m a man who cares about my community and I’m a history buff.”

Taylor said he was collecting the items in hopes of opening a museum to educate people about military history. It was something he said never got off the ground, and since 2012, has donated or given away most of the items to museums or “valid collectors.”

But several experts in Holocaust education and history expressed concern to CBC about the way the items were posted on social media.

During the Second World War, Hitler’s Nazi extermination camps were responsible for the killings of about six million Jewish people and five million non-Jewish people.

Among photos of war memorabilia from a number of countries that a CBC News investigation found, 17 images or videos with swastikas or other items or references to Nazis were posted by Taylor on Facebook.

Several photos show Nazi flags with swastikas on them.

On Feb. 22, 2012, Taylor posted his “pic of the day” showing a framed armband used to identify people at the Buchenwald concentration camp in Germany.

“Could you imagine if this band could talk, resources were so scarce these bands were sometimes used a few times over,” the caption said.

Another photo put up March 2, 2012, shows what Taylor claims to be a “german panzer kill badge … awarded to tankers that achieve multiple kills.”

He added in his caption, “i wear this on my bike vest.”

Attached to an image of a war-time helmet, Taylor wrote: “hey clem, this one is for you my little nazi, lol.”

In the interview with CBC News, Taylor apologized for harm caused by any of the Facebook posts he had shared.

Taylor said when he posted the images, he thought he was sharing them only with a few friends that knew about his intent to open a museum, so people could learn about military history.

The items from Nazi Germany, including flags and pieces with swastikas emblazoned on them, were just a part of his collection, Taylor said, which also included historical equipment from America, Italy, Russia and Britain.

“I always went to the spot of education. We need to remember this stuff. We need to never forget the atrocities. Ever.”

While he had these items in his home, Taylor added he gave tours to many of his friends, telling them the history and stories of the items.

“I have no shame in it, honestly. No ill intent there. It was just an educational tool.”

A post made by Taylor on June 17, 2012, shows a sculpture of Hitler’s head that he claims to be from about 1942 and made of solid bronze.

In the caption, Taylor said, “i am not a nazi, just a history buff.”

It’s an argument met with skepticism by Jody Spiegel, director of the Holocaust Survivor Memoirs Program at the Azrieli Foundation in Toronto, and incoming chair of the education working group for the International Holocaust Remembrance Alliance.

“These are triggering images, and a place like a museum is a space for education and discussion,” Spiegel told CBC News after viewing the Facebook posts.

Daniel Hannah, president of the Shaarey Shomayim Congregation in Thunder Bay, said it’s hard to understand why anyone would want to collect items associated with anti-Semitism and the Holocaust.

“It raises questions about their judgment,” Hannah said in an emailed statement to CBC.

He worried such collections support the business of auction houses that cater to neo-Nazis, and called several of the images “disturbing.”

These symbols do carry a moral responsibility … they can’t be divorced from the history in which they were produced.– Valerie Hébert, associate professor of history at Lakehead University

Valerie Hébert, an associate professor of history with Lakehead University in Thunder Bay and an expert in Holocaust education, also reviewed some of Taylor’s Facebook posts.

“These symbols do carry a moral responsibility,” she said. “They can’t be divorced from the history in which they were produced.”

There is value in showing and understanding items from historical periods along with text to interpret and contextualize them, Hébert said, but she called the way in which the Facebook posts displayed the items “rather cavalier.”

“To think you can continue to trade in and display these kinds of symbols and not be responsible for the ideas that they represent is irresponsible. It’s careless and it’s potentially harmful.”

In response to these concerns, Taylor said his intention when posting in 2012 was to share new items he found with the few friends he had on Facebook at the time and who knew about his ambition to start a museum.

He said he posted the images so long ago, he forgot they were still publicly viewable.

“People are uncomfortable with history. They’re very sensitive and I understand that, but I’m a big believer that we need to remember the ugliest parts of our history.”

Taylor posted all his photos in 2012, shortly after he started volunteering for the hospital.

In 2015, Taylor received an honourable mention for the Patient Safety Champion award from the Canadian Patient Safety Institute for his work in the development and promotion of patient and family-centred care.

He was nominated by Rhonda Crocker Ellacott, current president and CEO of the Thunder Bay hospital, according to an article published by the TBRHSC.

The article noted Taylor’s work “has touched many areas of the organization,” including support in “hiring leaders” and sitting on a number of committees at the hospital.

She described Taylor at the time as “an amazing leader,” saying “we are fortunate to have an individual of his calibre engaged in our work.”

A request for an interview with Crocker Ellacott was denied by the hospital, with Bernardo saying: “As the hospital cannot discuss personnel/HR issues publicly, we are unable to grant an interview.”

The hospital also would not say what specific images violated its social media policy or whether a formal complaint was filed. It also wouldn’t comment on who was responsible for appointing Taylor to his position as co-chair of the patient family advisory council and for his inclusion in the senior leadership council.

The hospital also did not say if it would issue an apology to the public.