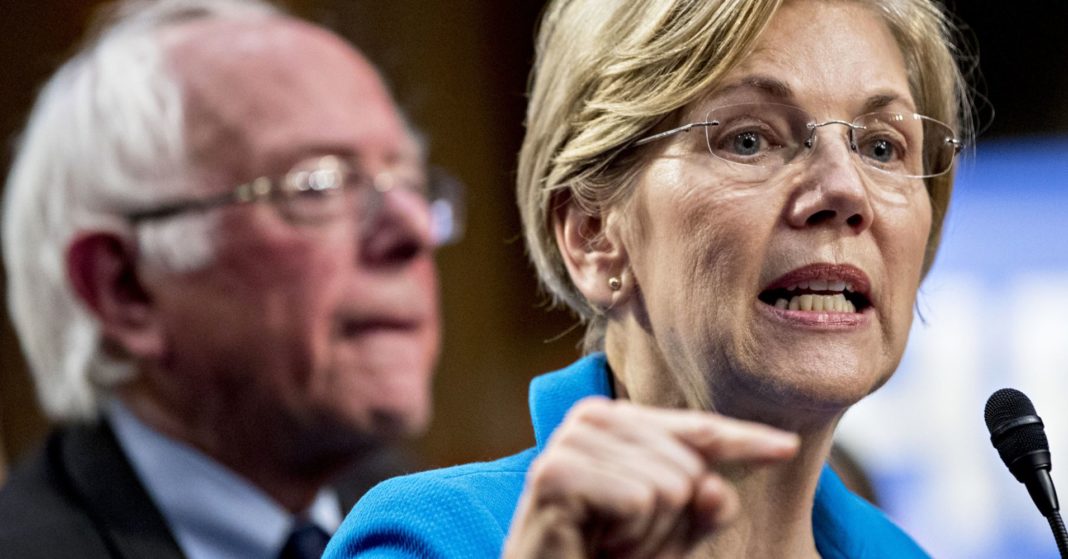 Senators Elizabeth Warren (D-Mass) and Bernie Sanders (I-VT) have introduced a new bill that would essentially wipe out tens of billions of dollars of Puerto Rico’s $73 billion in outstanding debt.

The proposed legislation entitled the “U.S. Territorial Relief Act of 2018,” which counts Sen. Kirsten Gillibrand (D-NY), Edward J. Markey (D-Mass.), and Kamala Harris (D-Calif.) as co-sponsors of the bill, says the bill “provides an avenue to comprehensive debt relief for Puerto Rico and other hurricane-ravaged U.S. territories so that they have a chance to get back on their feet,” according to the one-pager of the bill.

“Greedy Wall Street vulture funds must not be allowed to reap huge profits off the suffering and misery of the Puerto Rican people for a second longer. It is time to end Wall Street’s stranglehold on Puerto Rico’s future, return control of the island to the people of Puerto Rico and give the territory the debt relief it so desperately needs to rebuild with dignity,” said Senator Sanders.

“Puerto Rico was already being squeezed before Hurricane Maria hit and will now have to rebuild under the weight of crushing debt. Our bill will give territories that have suffered an extraordinary crisis a route to comprehensive debt relief and a chance to get back on their feet,” said Senator Warren. “Disaster funding and the other resources in struggling territories’ budgets must not go to Wall Street vulture funds who snapped up their debt. Congress should pass this legislation right away – our fellow U.S. citizens are counting on us.”

The proposed legislation, which also has Sen. Bernie Sanders name listed as a sponsor, would give Puerto Rico and other US territories the choice to terminate its non-pension debt load if they meet “certain stringent criteria,” according to the bill.

Rep. Nydia Velazquez (D-NY) is planning to introduce a companion bill in the House of Representatives in September.

“After Maria, Puerto Rico needs every tool possible to recover physically and economically. This legislation provides another path for the Island to get back on its feet and begin the journey toward a brighter future,” said Rep. Velázquez in a statement.

A US territory would have to meet two out of three criteria in order to qualify for the debt relief: a population decline of 5 percent over 10-years, received major federal disaster assistance, or their per capita debt would need to exceed $15,000.

Puerto Rico would almost certainly meet these requirements if the bill were to be signed into law.

The bankrupt island’s outstanding bond indebtedness is roughly $73 billion, or nearly $17,000 debt per capita, before Hurricane Maria struck the island in September. The Commonwealth has also projected a cumulative decline in population of 19.4 percent by 2022, according to the island’s fiscal plan.

If Puerto Rico chooses to terminate its debt within a three year period of the bill being signed into law, the bill would make $15 billion in federal funds available to some of the island’s residents and other creditors whose holdings were terminated.

The Territorial Relief Act of 2018 would put a “special master” in place to oversee the $15 billion in the “Puerto Rico Debt Restructuring Compensation Fund”.

$7.5 billion would be allocated for Puerto Rican creditors that held the terminated debt, including the island’s residents, banks and credit unions that did business solely in Puerto Rico, the island’s unions and public pension plans, businesses with a principal place of business on Puerto Rico, and anyone else the special master identifies.

An additional $7.5 billion would be allocated for creditors on the mainland U.S. who held the terminated debt, including individual investors, trade unions, pension plans, open-end mutual funds that pledge to waive the manager’s fee for any compensation received, and anyone else the special master identifies, according to the bill.

The bill would exclude “hedge funds and their investors, bond insurers, many financial firms with consolidated assets greater than $2 billion, and repo or swaps investors from the distribution,” according to the summary of the legislation.