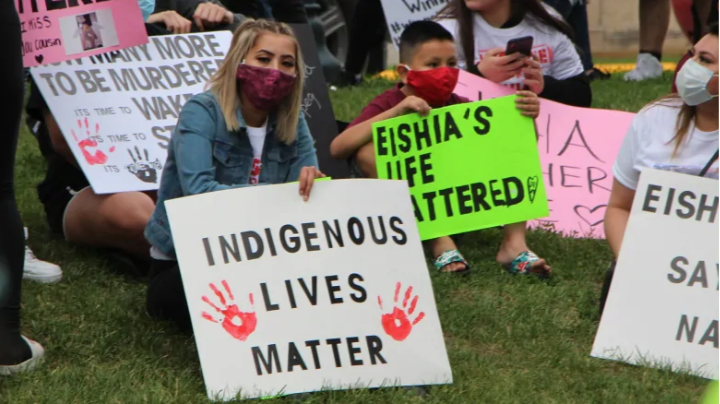 Canadians are more aware than ever before that for Indigenous people, the justice system is not so just. Disturbing stories of confrontations between First Nations, Inuit and Métis people and law enforcement continue to grab headlines across the country on a regular basis.

In June alone, RCMP officers assaulted a First Nations chief in Alberta over an expired licence plate, and mounties shot and killed two Indigenous people in New Brunswick within a span of eight days.

These stories are all too familiar to Murray Sinclair, who has been trying to address systemic racism against Indigenous people for decades, particularly in the justice system. He is a lawyer, Manitoba’s first Indigenous judge, the former chair of the Indian Residential Schools Truth and Reconciliation Commission and now, a senator.

Here are highlights from their conversation, edited for clarity and condensed.

Part of the responsibility of police officers and agencies is to earn the trust of the people. If the citizenry is going to give them the protections that the law offers and if they’re going to give them the support that police call upon, then the people are entitled to know that the police will do their jobs properly. So it is necessary for the police to guard against racists.

There are people who fundamentally believe that Indigenous people are inferior to all other people in society and that the Europeans who came here in the 14th to 17th centuries were inherently superior. All of that has led to this general view within society that Indigenous people are inferior and can’t be trusted. That attitude permeates society so much that people unconsciously carry it with them into the jobs that they do.

Canada put in place laws that reflected those beliefs about Indigenous people, like the Indian Act, which is a racist piece of legislation. We have a system that, in and of itself, and even without the individual racist, continues to discriminate.

I want people to understand that even those who support doing away with racism — those who believe that racism is bad — are themselves caught up in a system that almost forces them to continue to adhere to policies and beliefs that they don’t understand. It comes from a history of racism, and until we address that and learn from it, we can’t even begin to fix it.

Indigenous children are 12 times more likely to have their family life disrupted by an agency of government … [it] basically disrupts things by taking somebody away or by threatening to take somebody away.– Murray Sinclair

The general impact of mass Indigenous incarceration and trauma for a young Indigenous child growing up in Canada is quite stark. Whether or not that child ever gets involved with the law or gets involved with the child welfare system, Indigenous children are 12 times more likely to have their family life disrupted by an agency of government such as a police officer, child welfare worker or somebody who comes to their house and basically disrupts things by taking somebody away or by threatening to take somebody away.

They are the subject of a social control system virtually from the time that they’re born until the time that they become an adult. That impact is quite dramatic. Indigenous children basically come to dislike and distrust those agents because first of all, as children, they don’t understand what’s going on. But more importantly, they often come to resent it because they believe that the person who is “being dealt with” often is the person that they don’t want to have taken away.

Why Canadians should be wary of politicians’ platitudes over Indigenous issues

Just about every person that has ever conducted a commission or an inquiry into an aspect of systemic racism knows that commissions and inquiries are created by governments in order to get them out of an immediate pot of boiling water. They exist because governments don’t know how to deal with the situation that they’re put into and therefore, they create an inquiry, give it a mandate and lengthy period of time, some money and say: “Now go look at this and tell us what to do. We probably won’t do it, but at least for the time being, things will cool off.”

That’s what comes out of the process, there are these recommendations and people often respond to them by saying: “Those are great, those are true and we’re going to do them and we really believe in them,” and then we see nothing. We see very little action.

But on the part of the citizenry, we often see people who embrace them passionately. I realized when we were working on the Truth and Reconciliation Commission that the real key to any commission of inquiry is to ensure that the citizenry understands it and the people of the country understand and embrace them, because they’re the ones who are going to make the change happen.

In the case of the Truth and Reconciliation Commission, what stands out to me is not the failure on the part of the government to implement our Calls to Action, it’s the success on the part of citizens to make things happen.

Reconciliation is not a spectator sport. You have to become involved. You have to be engaged. And people have not yet embraced that idea.– Murray Sinclair

Climbing the mountain of reconciliation

We’re just now beginning to realize the difficulties of getting to the top of that mountain. Many people still see reconciliation as a problem for the government to solve, they don’t see their role in this. Our response has been that reconciliation is not a spectator sport. You have to become involved. You have to be engaged. And people have not yet embraced that idea.