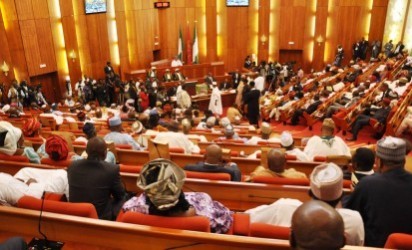 Senate, Presidency negotiating Magu out of EFCC
A peace plan to restore the frosty relations between the executive and National Assembly anchored on the removal of Mr Ibrahim Magu from Economic and Financial Crimes Commission, EFCC, is imminent. The exit follows Magu’s promotion to the rank of Commissioner of Police, a promotion Vanguard gathered, followed back-channel communication between the two arms of government on how to remove lingering obstacles to cordial relations between the two arms of government. SENATE CHAMBER With his promotion, Magu is expected to proceed for Senior Executive Course, SEC, at National Institute for Policy and Strategic Studies, NIPSS, Kuru, Plateau State. The Senate had insisted on Magu’s exit after two failed nomination appearances before the legislative body, which is constitutionally empowered to confirm nominees for the office of chairman of the agency. The Senate’s rebuff was rejected by the Presidency, which maintained Magu as acting chairman fuelling a beef with the legislature. With the presidency rebuffing the Senate and even claiming that it did not need Senate confirmation, the legislative body held up appointments by the president for several crucial positions in government and was only moved by what senators claimed as national concerns to clear nominations to the Central Bank of Nigeria, CBN last month. Magu However, following back-channel talks, Vanguard gathered that the presidency finally yielded to the pressure and as such facilitated the promotion of Magu to the post of a substantive commissioner of police, despite being promoted to the rank of deputy commissioner a year ago. Magu, who was appointed as acting chairman of the commission in November 2015 as an assistant commissioner of police with accelerated promotion is expected to proceed anytime soon to NIPSS, Kuru for the SEC course. The course is meant for those appointed as commissioners of police or their military equivalents. Vanguard gathered that Vice-President Yemi Osinbajo, who had been one of those that strongly backed Magu in the presidency is now hunting for a replacement for Magu. The exit of Magu is coming as part of the same strategy that was used to force out the pioneer chairman of the EFCC, Mallam Nuhu Ribadu, who was forced to proceed to SEC programme at NIPSS after the advent of the President Umaru Yar‘Adua administration in 2007. Magu who is affectionately adored as The General among his admirers was the pioneer head of the Economic Governance Unit, EGU, of the EFCC, the unit that deals with fraud issues relating to politically exposed persons. The peace plan nonetheless, Senate sources were still sceptical of detente in the relations between the two arms of government following last Wednesday’s mace snatching incident in the Senate.
Share
Facebook
Twitter
WhatsApp
Pinterest
Linkedin
ReddIt
Email
Print
Tumblr
Telegram
Mix
VK
Digg
LINE
Viber
Naver
Previous articlePDP says President buhari visit to London is a waste of resources
Next articleI can not be silenced, Dino Melaye says as Police, DSS lay siege to his residence