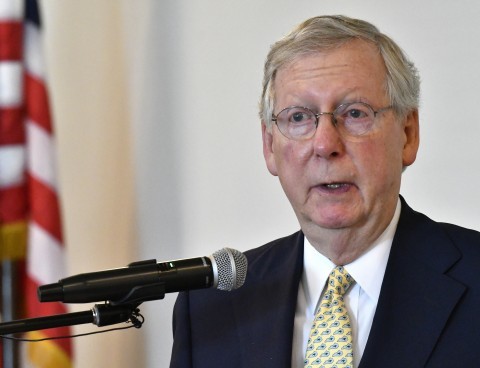 Senate Democrats have identified potential new allies in their effort to scuttle the current health-care proposal: Republican governors, particularly those who helped expand Medicaid in their states under the Affordable Care Act.

Sen. Thomas R. Carper (Del.), who is leading the effort with the support of fellow Democrats, called “a couple dozen” senators and governors from both parties over the recess, he said in an interview, to say “this is a good time for us to hit the pause button in the Senate, and step back and have some good heart-to-heart conversations” about how to revise the 2010 law.

Carper said the fact that the National Governors Association is holding its summer meeting in Providence, R.I., later this week could give governors a chance to weigh in on the debate.

The development shows Democrats moving beyond rhetorical calls for bipartisanship to insert themselves into a legislative process that Republicans have dominated. It also reflects continuing divisions within the GOP, with Republican governors emerging as potential allies for Democrats and others who oppose the current GOP proposal.

Those divisions remained clear Monday, when Senate leaders said they hope to release yet another draft of their health-care legislation this week even as senators and White House officials continued to disagree publicly about what approach to take.

“The governors can play a critical role in helping us get to where we need to be,” Carper said.

Several GOP governors, especially those who have taken advantage of the generous federal funding under the Affordable Care Act (ACA) to expand Medicaid coverage to able-bodied adults, have raised concerns about the Senate’s plan not only to cut $772 billion from Medicaid over the next decade but to make even deeper reductions after that through a revised spending formula. Those governors include Doug Ducey of Arizona, John Kasich of Ohio and Brian Sandoval of Nevada.

Meanwhile, a small group of centrist Republicans and Democrats have met occasionally in Washington to see whether they can find common ground — although that goal has proven elusive, given the ideological divide on health care.

Still, the ongoing conversations among a handful of senators suggest that some lawmakers are seeking a new path forward should the current bill collapse. A few rank-and-file Republicans have suggested that their party should negotiate with the minority, although White House officials rejected that idea outright on Monday.

There are some short-term measures that the two parties could agree on, which would be primarily aimed at shoring up existing private insurance markets. That could include continuing to provide $7 billion this year in federal subsidies that help lower-income people afford their out-of-pocket costs.

“Congress, in my view, could pass that immediately and it would make a big difference,” Sen. Ron Wyden (Ore.), the ranking Democrat on the Finance Committee, said in an interview Monday. “Because the number one thing private insurance plans and everyone on [the exchanges] want is certainty.”

The administration regularly touts problems with the federal health exchange rather than proposing new ways to support it. On Monday, the Centers for Medicare and Medicaid Services announced the number of insurers submitting applications to offer plans on the ACA market next year dropped by 38 percent, to 141.

“This is further proof that the Affordable Care Act is failing,” CMS Administrator Seema Verma said.

Republicans continued to show discord over how to fix it, however.

Both Pence and White House legislative affairs director Marc Short said Monday that senators should repeal the health-care law outright if they cannot agree on how to change it. Senate Majority Whip John Cornyn (R-Tex.), meanwhile, said his party will release a new draft of its proposal this week, “and then we’ll vote on it next week.”

That announcement came as lawmakers returned from their week-long recess, with many still raising questions about the leadership’s plan to abolish federal penalties for not having insurance while making deep cuts to the Medicaid program, and providing billions in tax cuts to insurers and wealthier Americans. In a sign of how activists have mobilized on the issue, police arrested 80 health-care protesters at 13 locations across Capitol Hill on Monday.

For some Republican senators, the recess and the stories they heard back home affected the way they approached the issue upon returning.

“One in three, almost,” receive coverage through “our version of Medicaid,” said Sen. Jeff Flake (Ariz.). “And so there was concern about that.” He said people also worried about coverage on the exchanges being “unaffordable.”

Said Sen. Deb Fischer (Neb.): “I traveled the state in this last week and had roundtables and we discussed health care and economic issues.”

Republican senators also faced new heat in their home states Monday, when Save My Care began a new round of TV ads pressuring Sens. Dean Heller (Nev.), Lisa Murkowski (Alaska), Susan Collins (Maine) and Shelley Moore Capito (W.Va.) to vote against the bill. The Heller ad included footage of him forcefully coming out against the measure at a news conference last month. The group said it is spending more than $1 million on the new campaign.

Capito, who met Monday with Senate Majority Leader Mitch McConnell (R-Ky.) and half a dozen of his top deputies, said leaders are looking at how to treat Medicaid funding and are working on “finding that sweet spot” that gets them at least 50 “yes” votes needed to pass a replacement.

Short acknowledged that the GOP plan remains unpopular with Americans, arguing that liberal groups have been “more organized in their messaging” on health care than Republicans have. He said President Trump will continue to be “very active in this debate,” possibly traveling to the home states of key senators to urge them to vote yes.

Short said the White House remains “confident” that the Senate will pass a bill before its August recess, “and we’re not going to be in a position of failure.” But if Republicans fall short of the 50 votes, with Pence casting the tiebreaking vote, Short said lawmakers should just repeal the existing law.

Sen. Roy Blunt (Mo.) was one of several GOP leaders to say Monday that they do not think it is possible to get 50 GOP senators to vote for a repeal-only bill.

But Pence embraced repeal as a back-up strategy in an interview Monday with radio host Rush Limbaugh, questioning those in his party who have suggested that “we ought to reach out and do a bipartisan bill.” That description could include McConnell, who has said he would have to reach out to Democrats to shore up the insurance markets if Republicans are unable to pass their own bill.

Pence continued: “The president has made it very clear: We believe that if they can’t pass this carefully crafted repeal-and-replace bill [where] we do those two things simultaneously, we ought to just repeal only and have enough time built into that legislation to craft replacement legislation in a way that’s orderly and allows states to adjust to different changes to Medicaid in a maybe three-year or four-year window.”

Pence’s endorsement of an outright repeal of the ACA, along with an amendment that Sen. Ted Cruz (R-Tex.) has crafted that would allow insurers to sell minimalist health plans on the ACA insurance market, could further fracture a divided GOP. At least three GOP senators — Cruz, Rand Paul (Ky.) and Ben Sasse (Neb.) — have endorsed this approach, but they remain in the minority in their caucus.

“I think it picks up conservative votes and loses other votes,” said Sen. Charles E. Grassley (R-Iowa) of Cruz’s proposal to change which plans are offered on the ACA market.

Speaking of a repeal-only bill, Blunt said: “I don’t think it could work at all.” Blunt, who joined Pence on a horseback ride in Rock Creek Park on Saturday, said the two talked about “how difficult it is to get people together on anything that impacts every family as much as health care does.”

Senate leaders also have serious concerns that the Cruz amendment might violate Senate budget rules that the health-care measure must meet to pass with 51 votes rather than the 60 votes needed for most other legislation.

Congressional Democrats have repeatedly asked Trump to work with them to fix — not repeal — the ACA. Before the recess, moderate Democrats led by Sen. Heidi Heitkamp (N.D.) tried to introduce a few proposed fixes before the recess, but Republicans rejected them. Senate Minority Leader Charles E. Schumer (D-N.Y.) also called for an all-senators meeting to discuss the subject and later for Trump to meet at the Blair House with members of both parties to craft a bipartisan plan. Both requests were ignored.

“It’s time to move on from the failing, Republican-only approach and start over,” Schumer said in a Senate floor speech Monday.

Some liberal Democrats are now pushing for a single-payer, government-run system that would widen the divide between the parties.

Sen. Bernie Sanders (I-Vt.) plans to introduce a single-payer bill soon that will be similar to the one he ran on during his 2016 presidential campaign, and Republicans have already challenged vulnerable Democrats to say whether they’ll stand with him. Sen. Tammy Baldwin (D-Wis.), who is up for reelection next year, told reporters in Wisconsin that she’d probably back single-payer.

Sen. Marco Rubio (R-Fla.) said Monday that Sanders’s supporters are “putting a lot of pressure” on Democrats, making it more difficult to negotiate.

“I don’t believe we’re going to be able to repeal Obamacare with Democrats,” Rubio said. “They may be willing to replace it after it’s gone.”