Sen. Susan Collins: If SCOTUS nominee Brett Kavanaugh lied, ‘that would be disqualifying’ 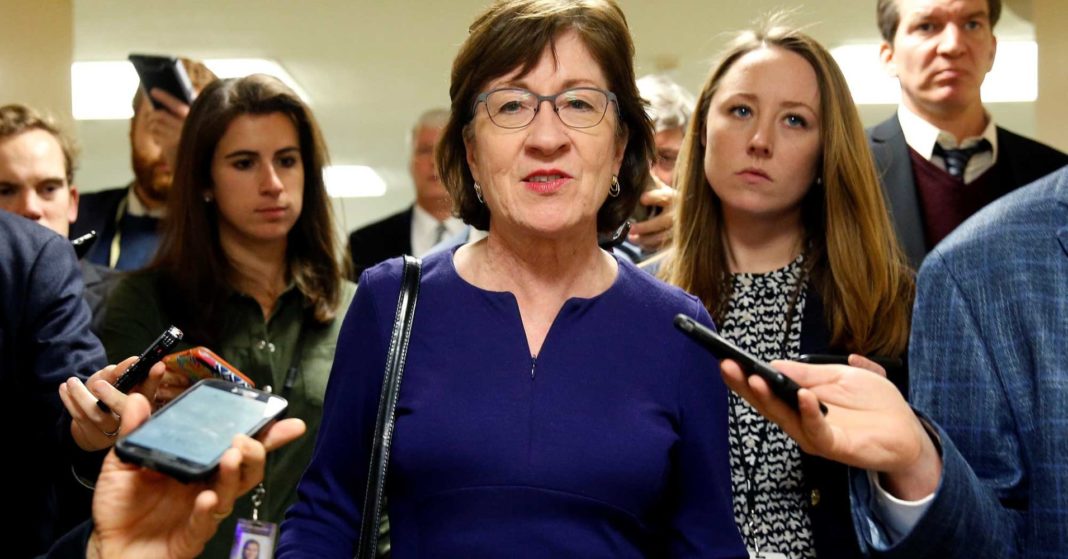 Sen. Susan Collins, R-Maine, told reporters on Monday that if Supreme Court nominee Brett Kavanaugh lied in denying that he sexually assaulted a woman at a high school party in the early 1980s that it would “obviously” disqualify him from a seat on the nation’s highest court.

“Obviously if Judge Kavanaugh has lied about what happened that would be disqualifying,” Collins said during a brief gaggle with the press outside her office.

Kavanaugh has vigorously denied that the alleged incident ever took place, and a White House official told NBC News Monday that Kavanaugh has said that he was not at the party. Kavanaugh gave the same account to Sen. Orrin Hatch, R-Utah, a Hatch aide told NBC News.

Collins also continued to demand a hearing on the issue with Kavanaugh and his accuser, Christine Blasey Ford, a position which seemingly puts her at odds with GOP leadership. Collins’ first demanded a hearing, with both parties under oath, in a tweet earlier Monday.

Sen. Lisa Murkowski, R-Alaska, who is also viewed as a potential swing vote in Kavanaugh’s candidacy, voiced her support for a hearing, as well.

“Allegations surrounding sexual assault must be taken seriously and the Judiciary Committee must look into this further,” Murkowski told CNBC in a statement Monday evening.

“Despite the length of time since the alleged incident, Dr. Ford’s allegations should be heard and she must have an opportunity to present her story before the committee under oath, with Judge Kavanaugh having the opportunity to respond under oath as well,” Murkowski added.

Collins said Monday that she assumed staff interviews “would be the prelude to some sort of hearing.”

She said that during a phone call with Kavanaugh Friday, after the contours of the accusation against him were public but before Ford came forward by name, the nominee told her “that he had never acted that way not only with this unnamed accuser but with any woman.”

“He emphatically denied that the allegations were true,” Collins said.

Collins has criticized Democrats for their handling of the allegation. In an interview with The New York Times on Sunday, Collins said that if Democrats believed Ford, “why didn’t they surface this information earlier so that he could be questioned about it? And if they didn’t believe her and chose to withhold the information, why did they decide at the 11th hour to release it?”

“It is really not fair to either of them the way it is was handled,” she said in the interview.

The Judiciary Committee is scheduled to vote on Kavanaugh’s nomination on Thursday, though all ten Democrats on the committee and a number of prominent Republicans have argued for the vote to be delayed pending further investigation. Counsel to Republican members of the committee are scheduled to hold a conference call with Kavanaugh Monday evening, a White House source told NBC News. Democrats have said they will not join the call.

Democrats have targeted Collins, as well as her Senate colleague Lisa Murkowski, R-Alaska, as Republicans who may break with their party to vote against Trump’s nominee. Trump nominated Kavanaugh in July to replace former Justice Anthony Kennedy. Kavanaugh appeared on track to easily secure a confirmation vote until Ford came forward this weekend with her accusation.