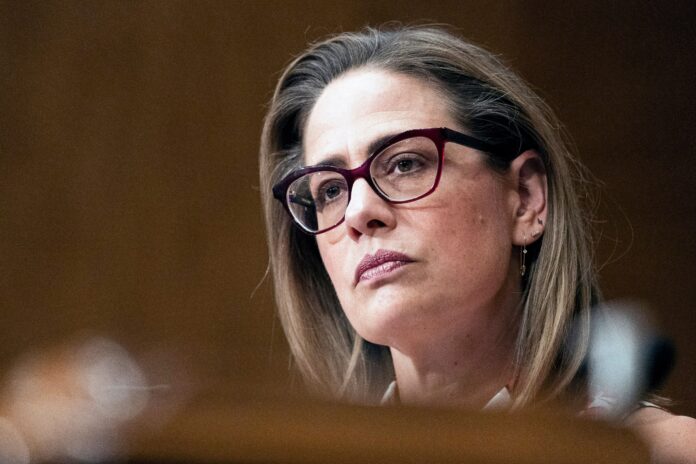 Sen. Kyrsten Sinema of Arizona said Friday that she has switched her party affiliation from Democrat to independent.

“I’ve registered as an Arizona independent. I know some people might be a little bit surprised by this, but actually, I think it makes a lot of sense,” Sinema told CNN’s Jake Tapper in an interview broadcast Friday.

Sinema’s defection may not affect the Democrats’ majority in the Senate when the next Congress begins in 2023. The party will still control committees and the Senate floor.

Sinema, who often bucked her party on elements of President Joe Biden’s agenda, said she is removing herself from the “partisan structure.” She added her move will “provide a place of belonging for many folks across the state and the country, who also are tired of the partisanship.”

In an op-ed published in The Arizona Republic on Friday, Sinema wrote she had promised voters to never surrender to pressure coming from either political party.

“My approach is rare in Washington and has upset partisans in both parties,” Sinema wrote. “It is also an approach that has delivered lasting results for Arizona.

Also read: isekai anime where the protagonist is very strong and all girls wants him #anime #isekai

Sinema, as an outlier Democrat, often acted as an obstacle to Biden, including by refusing to eliminate the filibuster, and was already perceived to be largely acting as an independent.

Two other Senate independents, Sens. Bernie Sanders of Vermont and Angus King of Maine, caucus with Democrats. Sinema didn’t specifically say whether she would.

A White House official said the administration was aware of Sinema’s switch, adding that her decision changes little for Democrats “except for her reelection path,” according to NBC’s Mike Memoli.

A WH official says they were informed about Sinema Thurs afternoon, and believe it will not impact their Senate majority. They don’t think “it changes much except her re-election path.”

Sinema, who is up for reelection in 2024, was reportedly unpopular with Democratic voters in her state.

A poll by the progressive group Data for Progress published last year showed she was likely to lose her 2024 primary. Democratic Rep. Ruben Gallego was one potential challenger, according to CNN.

Also read: Lea Michele’s Grandfather Had An Unexpected Connection To The Mob

An AARP poll released in September found Sinema was the least popular among Sen. Mark Kelly and now-Gov.-elect Katie Hobbs, with 54% of voters saying they had an unfavorable view of her. The survey also showed Sinema’s support was mostly split evenly among Democrats, Republicans, and independents, while Kelly and Hobbs enjoyed robust backing from Democrats.