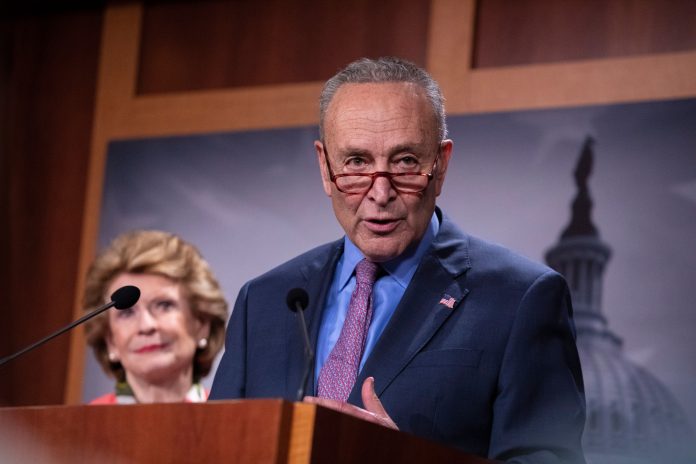 A progressive group is airing a new television ad aiming to pressure Senate Majority Leader Chuck Schumer into calling a vote on a major piece of antitrust legislation, the latest example of a round of scrutiny on why the New York Democrat seems to be slow-walking a bipartisan agreement to crack down on big tech companies.

“Big tech monopolies are corrupting our economy, and Sen. Chuck Schumer is letting it happen,” a narrator says in the ad from Fight Corporate Monopolies as images of Schumer side-by-side with Facebook founder Mark Zuckerberg and Amazon founder Jeff Bezos appear on screen. “Schumer has a choice: Side with greedy tech monopolies or the American people.”

The ad, which will run on Washington, D.C., cable channels, notes Schumer’s daughters work for Amazon and Facebook, and he has raised money from tech lobbyists and executives.

The bipartisan legislation, authored by Sens. Amy Klobuchar (D-Minn.) and Chuck Grassley (R-Iowa), would prevent Google, Amazon, Facebook, Apple and other tech giants from using their power as gatekeepers to discriminate against small businesses and rival companies.

Schumer has promised Klobuchar a vote on the legislation when 60 senators ― the number needed to break a filibuster ― will back it. Klobuchar and Grassley insist they have the necessary support, but Bloomberg News reported Tuesday that Schumer told a group of donors at a Washington fundraiser that the votes weren’t there.

Klobuchar told Bloomberg News that Schumer “promised a vote on this bill and we take him at his word.”

“We have growing momentum and the support to pass the bill despite the fact that the companies have spent an atrocious amount of money on lobbyists and TV ads spreading false information,” she said.

Earlier in the day, Schumer’s office pointed to his response to a question about the legislation last week when asked for comment. “I’m working with Sen. Klobuchar. I support these bills, I want to bring them to the floor, we have to see that we have 60 votes,” he said at the time.

Progressives and Republicans alike, however, increasingly view Schumer as the major obstacle to passing the legislation. The Congressional Progressive Caucus sent Schumer a letter on Friday imploring him to schedule a vote, and Grassley directly called on him to schedule a vote either before the August congressional recess or this fall in an interview with The New York Post on Sunday.

“He’s repeatedly delayed, he’s broken promises now to schedule a vote. He’s the main roadblock at this point,” said Helen Brosnan, the executive director of Fight Corporate Monopolies. “Voters want to see him do what he was elected to do, not carry water for these monopolies.”

Schumer’s decision to break with progressives on this issue has also raised eyebrows. Though the resistance of Sens. Joe Manchin (D-W.Va.) and Kyrsten Sinema (D-Ariz.) has meant Schumer could not deliver on some key progressive priorities, he’s generally avoided directly antagonizing his party’s left flank.

One advocate working on the issue, who was granted anonymity to speak bluntly about the powerful senator, said Schumer was making a mistaken calculation about the necessity of collecting donations from big tech in the run-up to the 2022 midterm elections.

Some of the other Democratic senators who have been nervous about supporting the legislation, including Sen. Maggie Hassan of New Hampshire and Sen. Michael Bennet of Colorado, are facing potentially tough battles for reelection in 2022.

The tech industry has broken lobbying records as they try to fight off the legislation, spending more than $30 million so far this year, plus millions more on a flurry of digital and television ads aiming to turn voters off and persuade senators in key states. They’ve also funded longtime conservative business groups, including the Chamber of Commerce and Americans for Tax Reform, to push Republicans to oppose the law.

The legislation remains popular in most public surveys, even if antitrust enforcement is not a top public priority. A Pew Research Center poll from April, one of the few available not funded by either tech companies or their opponents, found 44% of Americans supported more regulation of tech companies while 30% saw no need for change and 20% thought there should be less regulation.

That represented a decline in support from April 2021, when 56% of Americans wanted more regulation of tech companies.

A survey conducted in May by the Democratic firm Hart Research for the Tech Oversight Project found roughly three-quarters of voters in four major Senate battleground states ― Nevada, New Hampshire, Arizona and Georgia ― backed the legislation.

Antitrust advocates do not expect immediate action from Schumer, since the Senate calendar before the August recess appears full, with votes set on both a Democratic plan to allow Medicare to negotiate drug prices and a bipartisan plan to fund semiconductor investments. Still, they are hopeful Schumer will schedule a vote in the fall or during Congress’s lame-duck session in November.